Our very own Saint George….

I have always assumed a country’s patron saint would be native to that land – or at the very least would have spent part of their life living there…. However, this is not necessarily true; indeed our very own Saint George never even set foot on English soil…. In fact, I say ‘our own’ – but to be correct it has to be pointed out that we actually share him with many other countries, cities and organisations…. George is also patron saint of lands and places such as Beirut, Malta, Portugal, Ethiopia, Georgia, Catalonia, Serbia, Lithuania, Venice, Palestine and the City of Moscow. He is the patron saint of soldiers, archers, cavalry and chivalry….farmers, riders and more recently scouts. He is believed to help those suffering from plague, leprosy and syphilis….

It is thought George was born in Cappadocia – (now part of modern-day Turkey) – around 280 AD, in to a wealthy Christian family. His father was a soldier and it was after his death that George’s mother moved the family back to her native Palestine…. George grew up and followed in his father’s footsteps by becoming a soldier, serving as an officer in the Guard of Roman Emperor Diocletian….

In 303 AD Diocletian ordered the systematic persecution of Christians; George refused to take part and also refused to renounce his own Christianity…. Some believe that initially Diocletian tried to persuade George to convert by offering him land and wealth – when this method failed he gave orders for George to be tortured. It is said he was forced to swallow poison, was crushed between spiked wheels and boiled in molten lead…. each time his wounds healed overnight – the work of God…. George was told if he offered a sacrifice to the Roman gods his life would be spared. A crowd gathered to witness him doing so – but in front of all the onlookers he prayed to the Lord instead…. A great flash of fire came from Heaven, an earthquake shook the ground, buildings and temples collapsed…. The sign was taken that God wished George to die for his faith….and so he was beheaded at Lydda, Palestine on 23rd April 303 AD; he died the death of a Christian martyr. Some say Diocletian’s own wife was so impressed by the resolve of George that she converted to Christianity….only to be beheaded herself….

Upon canonising St. George in 494 AD Pope Gelasius I apparently remarked of him…. “Whose names are justly reverenced among men, but whose acts are only known to God”….

The earliest known reference to St. George was the account by St. Adamnan, Abbott of Iona in the 7th Century. He had heard the story from a French bishop who had travelled to Jerusalem. It was during the Crusades of the 10th and 11th Centuries that returning soldiers brought back with them stories they had learned from the Eastern Orthodox Church – and so St. George’s reputation grew…. But it wasn’t until 1483 that the tale became really well-known, when Caxton printed it in a book called The Golden Legend – a translation of French bishop Jacques de Voragine’s work, telling of the lives of saints….

Stories during the Middle Ages centred very much around the beliefs of the time – tales were embroidered with myth – such as the legend of Saint George and the Dragon….

A city in Libya, possibly Silene, had on its outskirts a small lake, inhabited by a plague infected dragon…. The creature was terrorising the city, killing many of the people…. To try to keep the dragon appeased the city dwellers began to feed it with two sheep a day….but it wasn’t long before the supply of livestock ran dry. The King devised a lottery scheme so that local children were chosen and fed to the dragon…..then one day his own daughter’s name was drawn…. At first the King tried to bargain for her life – but the people were having none of it as so many of their own children had already been sacrificed…. It was as she was being led to the lake that George rode by and encountered the fair maiden and he enquired as to what was happening. The maiden begged him to carry on his way as the dragon would surely kill him too…. As they talked the creature suddenly came charging towards them; George leapt upon his horse and drew his sword and smote a cross into the dragon’s flesh – he then speared the beast and threw it to the ground…. He told the maiden to take her garter and fasten it around the creature’s neck and when she had done so it became meek and followed her back to the city…. At first the people panicked but George told them not to be afraid; he promised that if they were to believe in God and become baptised he would slay the dragon. The King was first to do so, followed by all his people….George killed the dragon; it was then dragged from the city to the fields, needing four ox carts in order to do so…. The King built a church at the site where the creature was slain and a fountain sprang up – giving healing water for those who were sick….

The earliest church known in England to be dedicated to St. George is in Fordington, Dorset….and in 1222 the Council of Oxford named April 23rd as St. George’s Day…. But it was King Edward III who really set the ball rolling on the path to him becoming our patron saint….

When in 1327 Edward III came to the throne, after the disastrous reign of his father, he needed to make England strong and powerful once again; with his bravery, honour and gallantry St. George was an ideal image to portray this…. Around 1348 Edward III founded the Order of the Garter, our system of knighthoods and honours; he made it under the patronage of St. George…. Since the 14th Century St. George has been seen as a ‘Protector of the English’; he became adopted by us as one of our own…. Soldiers once wore white tunics with the Red Cross of St. George on the front and back….the flag became incorporated in the Union Jack….

St. George’s Chapel, Windsor (the venue of a certain soon upcoming Royal wedding) built by Edward IV and Henry VII as Chapel of the Order has its official badge showing St. George slaying the dragon…. The George Cross inaugurated by King George VI in 1940 and given for acts of heroism and courage in circumstances of extreme danger (mainly to civilians) also has a dragon slaying George depicted upon it….

Although not a national holiday there will be those in England who will be flying the flag of St. George this coming April the 23rd…. As a nation we don’t go overboard with the celebrations on our patron saint’s day….some may choose to wear blue as this was rumoured to be St. George’s favourite colour – or maybe a red rose, which is associated with his death…. Some towns and cities, such as Manchester, have a St. George’s Day festival – but for the rest of us, if we are so inclined, we may enjoy a spot of Shakespeare, sing Jerusalem, partake in a little Morris dancing or eat a hearty traditional English meal, such as a roast dinner, bangers & mash or fish & chips…. 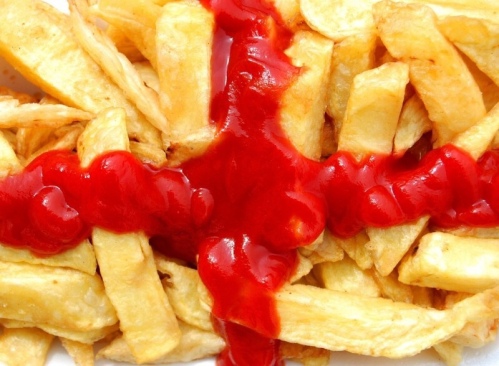 Whatever you get up to on Saint George’s Day….have fun….

Please…. If you have read this post through to the end – then I assume you found it of interest and I hope you’ve enjoyed it…. If you have found this via Facebook, a little ‘like’ for the Cottage Capers’ page would be very much appreciated – a like and follow would be even better…. I’m not trying to sell you anything – I’m simply a blogger trying to establish myself…. Many thanX….

2 thoughts on “Our very own Saint George….”