On this day in history : 1st January 1839 – The death of John Pounds – shoemaker, altruistic teacher – and the man originally responsible for the concept of the ‘Ragged Schools’….

John Pounds was born on the 17th of June 1766 and when he was 12-years-old his father arranged for him to enter into an apprenticeship as a shipwright at the Portsmouth Dockyard…. It was when he was 15 that Pounds was to have a life changing accident – he fell into a dry dock injuring his thigh and leaving him severely crippled…. Unable to continue working at the dockyard he became a shoemaker and was able to open a small shop on St Mary Street, Portsmouth – where he was to become known as ‘the Crippled Cobbler”….

It was in 1818 that he began to teach the poverty stricken children of Portsmouth – it is thought this may have come about after he had begun to educate his young disabled nephew out of concern for his welfare…. Pounds would scour the streets and quays of Portsmouth looking for homeless children – he would often take with him food, such as baked potatoes, to entice them…. He would then take them back to his shop where he would teach them the basics of reading, writing, and arithmetic…. He gave them religious instruction and lessons in skills such as carpentry, shoe making, cooking, clothes mending and toy making…. All for no fee – and sometimes there were up to forty children in his class at one time…. 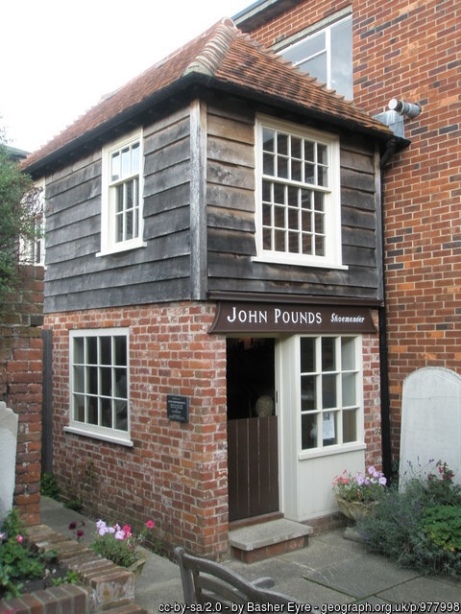 The inspiration behind the concept of Ragged Schools is often credited to the Reverend Thomas Guthrie. He had first come across the idea whilst acting as Parish Minister for St. John’s Church in Edinburgh in 1841 – when he had seen a picture of John Pounds in Fife…. He was inspired by Pounds’ work with the children. In his publication “Plea for Ragged Schools”, which he wrote to raise awareness and enlist public support for the cause in March 1847, he proclaimed John Pounds as the originator of the idea…. He wrote….

….”My first interest in the cause of Ragged Schools was awakened by a picture I saw in Anstruther, on the shores of the Firth of Forth, It represented a cobbler’s room; he was there himself, spectacles on nose, old shoe between his knees, the massive forehead and firm mouth indicating great determination of character; and Fromm between his bushy eyebrows benevolence gleamed out on a group of poor children, some sitting, some standing, but all at their lessons around him”…. (Quoted in Montague 1904)….

Guthrie opened his own ‘Edinburgh Original Ragged School’ in April 1847 – he is considered a core leader of the Ragged School Movement – although he was not the first to open such a school in Scotland….

In 1841 Sheriff Watson became frustrated by the amount of youngsters being brought before him in his Aberdeen Court Room for petty crimes…. Rather than keep sending them to prison he decided to make it compulsory for them to attend school. Initially he tried to incorporate them into ordinary day schools but teachers objected, not wanting these dirty, ragged, poor children in their classrooms…. Sheriff Watson established a school especially for these children; three meals a day were provided and lessons given in reading, writing, arithmetic and geology…. Children were taught trades such as shoe making and printing….with the hope of giving them a future…. At first the school was just for boys – but in 1843 a girls’ school was set up and in 1845 the two schools integrated…. It did not take long for the idea to spread to Dundee and to other parts of Scotland….

Around the same time, in 1841, a Ragged School began in Clerkenwell, London…. It has to be said that various organisations lay claim to having been first to offer free education…. Indeed back in the 1780s Sunday Schools began to emerge….often Christian but not always, they were to provide education for children who were otherwise working during the week….Thomas Cranfield, a tailor and former soldier, had gained his own education at a Sunday School in Hackney…. In 1798 Cranfield established a day school close to London Bridge, giving free education to London’s poor children…. By the time of his death in 1838 nineteen such schools had been set up across London, providing educations days, evenings and on Sundays….

The term ‘Ragged School’ seems to have been first used by the London City Mission in 1840…. The Mission had been set up in 1835 to help the poor in London…. It ran soup kitchens, penny banks, helped provide clothing and education – using paid missionaries and agents…. Ragged School became the name commonly given to any independent school set up on a charitable basis…. By 1844 the London City Mission was responsible to looking after at least twenty Ragged Schools…. It became apparent a way was needed to bring together and organise all of the independent free schools that had been established…. 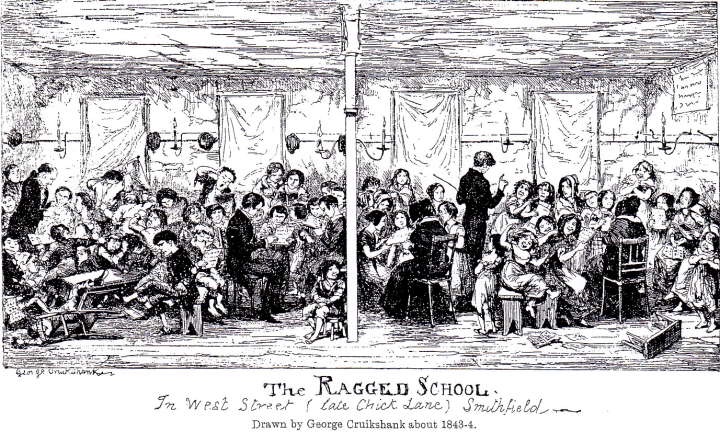 In April 1844 a committee was formed….to look at welfare needs in the community….and most importantly, educational needs of the children. The committee comprised of Mr Locke – a woollen draper, Mr Moulton – who dealt in second hand tools, Mr Morrison – a City missionary and a Mr Starey…. On the 11th of April 1844 the Ragged Schools Union was formed….

At this gathering they resolved “to give performance regularity, and vigour to existing Ragged Schools, and to promote the formation of new ones throughout the metropolis, it is advisable to call a meeting of superintendents, teachers and others interested in these schools for this purpose”…. 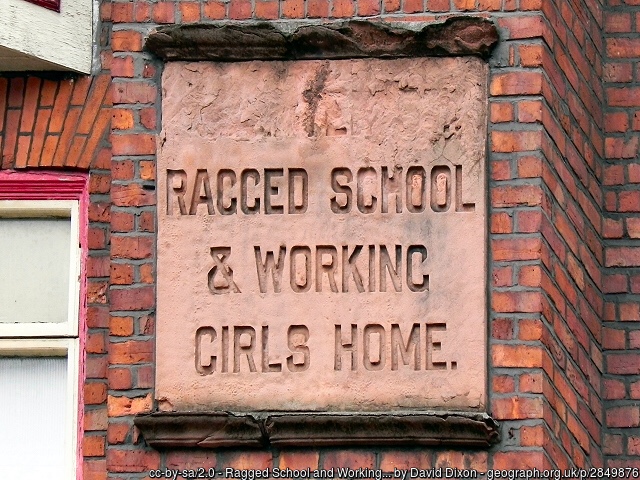 There was much support for the cause; from the wealthy, who could contribute financially (it became quite ‘fashionable’ to do so)….to famous names who helped promote it…. Charles Dickens was one such….he had visited the Field Lane Ragged School in London – it is said to be one of his inspirations for ‘A Christmas Carol’….

Later the Ragged Schools Union became known as the Shaftesbury Society…. The 7th Earl ofShaftesbury became chairman of the RSU and remained so for nearly forty years….in this time some 300,000 children benefitted from free education…. In 1844 the RSU began with 200 teachers….by 1851 it had 1600…. By 1867 there were 226 Sunday Ragged Schools, 204 day schools and 207 evening schools….providing free education for approximately 26,000 children….

In 1870 the Education Act was passed….over the next few coming years some 350 of the schools established by the Ragged Schools Union were absorbed into the new Board schools….