On this day in history : 24th May 1809 – Dartmoor Prison is opened….after being purposely built to accommodate the thousands of French prisoners captured during the Napoleonic wars….

Britain and France were at war between 1803 and 1815…. At first prisoners of war were held in redundant warships that had been converted into floating prisons….they were known as ‘the hulks’…. Conditions onboard were beyond terrible; overcrowding, lack of sanitation, malnutrition, hardly any exercise, little fresh air and rife disease meant the death rate became unacceptably high…. It became obvious a permanent prison was needed on dry land….

Many of the hulks were located at Plymouth and it was decided a good place for the new prison would be at Princetown on Dartmoor – land which happened to belong to the Prince of Wales (the future King George IV)…. The foundation stone was laid on the 20th of March 1806 – and the intention had been that it would be built in 18 months…. However, due to disputes involving labour and the inclement Dartmoor weather the actual construction time was double that….

The first prisoners arrived in May 1809….and by the end of the year the prison was full and had soon become over crowded…. In April 1813 American prisoners of war started to arrive – and the conditions became even worse…. At one point there were almost 6,000 men crammed into the prison; diseases such as typhoid, smallpox and pneumonia claimed many lives…. In all over 1,200 Frenchmen and 271 Americans died…. The dead were buried on the moor….

The wars ended and the prisoners returned to their homelands, the last leaving in early 1816…. The prison remained empty until reopening in 1850 to take convicts…. At first prisoners came from the prison ships on the Thames and at Gosport….the majority had some form of disability – and it was thought the fresh Dartmoor air would do them some good….

New iron cells were constructed, replacing the old stone ones – and gradually the old stone prison buildings were replaced by the Victorian ones which make up much of the prison today…. 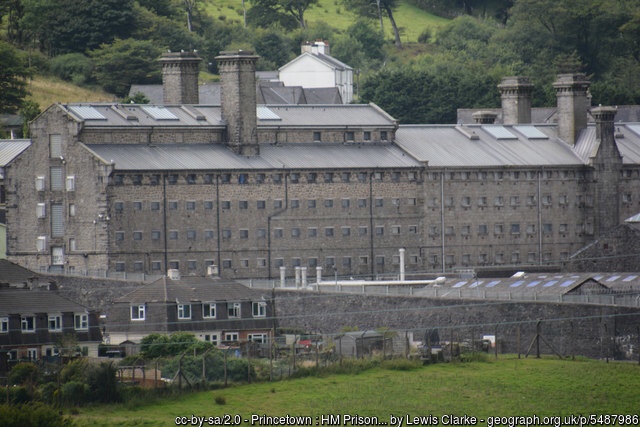 At some time around 1852 the graves of the war prisoners were exhumed – and the remains re-buried in two graveyards to the rear of the prison…. This was done on account of the new prison farm which was about to be established….

During the years of World War I the prison became a Home Office work centre….. Conscientious objectors could attend a tribunal to state their objections to serving the Country, on moral or religious grounds…. Sometimes they would be able to sign an agreement to work at a labour camp…. Dartmoor accommodated 1,000 such men….the locks were removed from the cell doors and they were able to move freely around…. Warders were merely supervisors, the ‘Conchies’ wore their own clothes and during their free time they were able to visit the village – although generally they were despised by society – being seen as cowards….

The prison re-opened as a penal detention establishment in 1920 and housed some of Britain’s most notorious criminals…. Nowadays the prison holds low category prisoners….