On this day in history : 27th May 1919 – Oil is struck at Britain’s first on-shore oil well, at Hardstoft, near to Tibshelf in Derbyshire…. 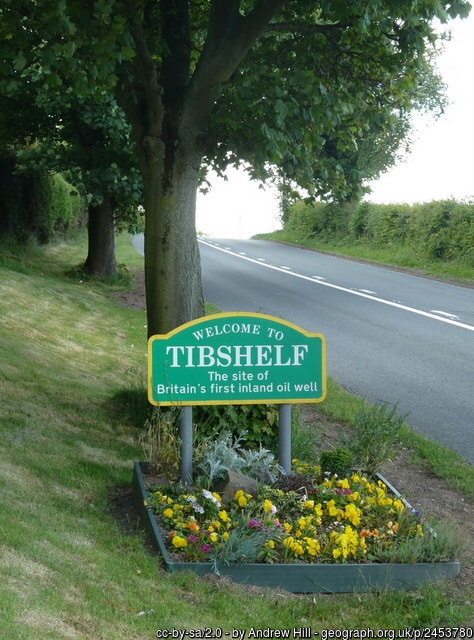 In 1911 Winston Churchill was First Lord of the Admiralty….and it was under him that the decision was taken to change the fuel used by Royal Navy ships from coal to oil – giving ships more speed, range and greater efficiency….

At the time Britain had to rely on importing oil from the Empire, such as Burma and Trinidad – and then later mainly from Persia…. When World War 1 broke out obviously demand for oil increased considerably – but there was a problem, in the shape of German submarines….who posed a great threat to the supply….

Panicking the Government commissioned S.Pearson & Sons, a company owned by Lord Cowdray – of the Cowdray Estate in Midhurst, West Sussex – to do a study of potential areas in Britain where oil might be found…. Lord Cowdray also owned the Mexican Eagle Oil Company….

The first drill site was to be at Hardstoft in Derbyshire, on land belonging to the Chatsworth Estate and owned by the Duke of Devonshire…. It took three and a half years before an agreement was signed on the 10th of September 1918 – by now the War was coming to an end….

Britain had no experience of oil drilling and certainly did not have the equipment to do it – so it had to be brought over from the United States…. Hardstoft No.1 was finally ‘spudded’ (meaning drilling commenced) on the 15th of October 1918….using a cable drill rig….

Legal difficulties and political differences held up production in the early days; a dispute arose over who owned the oil….the landowner or the Crown? The first oil produced had to be stored in a tank on site until the decision was made…. A Petroleum Production Bill was defeated in Parliament after Labour objected to royalties being paid to landowners…. Lord Cowdray was most put out – he told the House of Lords “I had expected a Rockefeller fortune”….

Between June 1919 and December 1927 the Carboniferous Limestone yielded some 20,000 barrels of oil, roughly 50 a week…. It was said to be of a quality to rival the high grade oil of Pennsylvania….

Lord Devonshire took over the drilling operations….a nodding donkey was installed…. Eventually the oil flow began to decline before the well ceased to produce oil commercially in 1945…. The disused well is now situated within the grounds of a plant nursery – aptly named ‘The Oilwell Nurseries’….just a short section of rusty pipe in an oily puddle can be seen….

Ironically the current Lord Cowdray has recently been involved in a dispute when he refused an oil company permission to carry out oil exploration on his land…. Nowadays, oil extraction methods are often very different to the old traditional ways – fracking has become a very controversial topic…. It is a debate I’m afraid many more of us are likely to be dragged into in the near future as the oil companies identify new potential drilling sites across the Country…. It is an issue that has presented itself in this little village of Dunsfold only in the last few weeks…. Needless to say we are opposing it….