On this day in history : 29th December 1860 – HMS Warrior, Britain’s first iron clad warship, is launched – during the coldest winter London had seen for 50 years…. It was so cold Warrior froze to the slipway during her launch and it took 6 tugs to help haul her into the River Thames…. 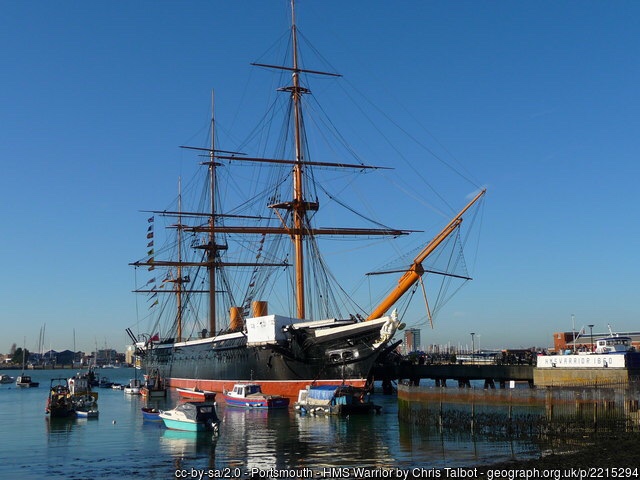 Warrior was built to rival the French iron clad ship ‘La Gloire’….the first ship of its kind in the world…. The First Lord of the Admiralty, Sir John Somerset Pakington, was determined to have a ship bigger, faster and with more gun power than that of a French ship….

Warrior was designed by Chief Constructor of the Royal Navy, Isaac Watts and Chief Engineer Thomas Lloyd…. The 40-gun, steam powered armoured frigate was built between 1859-61….and the contract for the great iron hull was won by the Thames Iron Works and Shipbuilding Company, in Blackwall, London….

On the day of the launch large crowds gathered to watch – braving the bitter cold….the dockyard and even the Thames covered in frozen snow…. Braziers had been lit down each side of the ship the day before and kept burning through the night – but despite this Warrior remained frozen to the slipway…. Sir John Pakington named the ship….but she was stuck fast…. On the upper deck hundreds of men ran from side to side to try and rock her free…. In the end tugs and hydraulic rams had to be employed and some twenty minutes later the ship began to move…. “God speed the Warrior” shouted Sir John….as he broke a bottle of wine upon her bow…. Cheers erupted from the watching crowd as she took to the water….

The morning after the launch Warrior was moved to the Victoria Docks, ready for fitting out…. She eventually left the Thames bound for Portsmouth on the 19th of September 1861…. When commissioned Warrior was the largest warship in the world – 60% bigger than La Gloire and weighing 9,210 tons…. Along with her sister ship, ‘Black Prince’, the pair were to become the most feared ships to sail the seas….

Warrior began active service in June 1862, patrolling coastal waters and sailing to Gibraltar and Lisbon…. She was the pride of the British Navy – and was crewed by 50 officers and 656 sailors…. The majority of the crew lived on the gun deck – with up to 18 men, sleeping in hammocks, between each gun…. Life would have been very similar to that on board the traditional wooden ships….the work hard, with a lot of heavy labour involved…. The anchor alone was one of the heaviest manually hauled anchors in history….

The officers were allocated small, individual cabins at the rear of the ship…. Whereas, the Captain had two spacious and well-furnished cabins….

By 1871 Warrior had been superseded by faster ships with bigger guns….and she was downgraded to coastguard patrol and reserve purposes…. In May 1883 it was discovered that her masts were rotting – and it was decided it would not be economic to repair her…. In 1904 she was renamed Vernon III and was converted into a floating naval torpedo training school….

In 1924 Warrior was put up for sale as scrap – but no buyers came forward…. So in March 1929 she was taken to Pembroke Dock and turned into a floating oil pontoon and give the rather un-majestic name ‘Oil Fuel Hulk C77’….

Between 1861 and 1877 forty five iron hulled warships were built for the Royal Navy….by 1978 Warrior was the only one left…. It took a £9 million restoration project to restore her to her 1862 condition…. The work was completed in Hartlepool – and she has been back in Portsmouth at the Historic Dockyard as a museum ship since 1987….and well worth a visit if you are able….