On this day in history : 13th February 1958 – The death of Dame Christabel Pankhurst – eldest daughter of Emmeline Pankhurst and co-founder of the Women’s Social and Political Union….

Christabel Harriette Pankhurst was born on the 22nd of September 1880 in Manchester…. Her mother owned a small shop at the time and her father, radical socialist Richard Pankhurst was a barrister…. Christabel and her two younger sisters, Sylvia and Adela, attended Manchester High School for Girls and then Christabel went on to the University of Manchester to study law….

In 1893 Richard and Emmeline formed a branch of the new Independent Labour Party (ILP) and in 1895 Richard stood as ILP member for Gorton in the General Election…. Christabel and Sylvia became involved in the campaign, in which Richard got a respectable amount of votes but lost to the Conservatives…. It was whilst Christabel and Sylvia were in Geneva in 1898 – as part of an extended European holiday – that they received a message to hurry home as their father was ill…. By the time they had arrived Richard had died from a perforated ulcer….

In 1903 Christabel and her mother founded the Women’s Social Political Union….adopting the slogan ‘Deeds not words’…. Christabel was arrested and imprisoned for the first time in 1905 – she and fellow suffragette Annie Kennedy disrupted a Liberal Party meeting in Manchester by unfurling a banner proclaiming ‘Votes for Women’…. Her actions caught the attention of the world, even more so because of her imprisonment – her arrest and subsequent treatment afterwards prompted Emmeline to begin to take more militant action….

Upon her release Christabel embarked on a campaign including more direct action…. She helped organise large rallies and as civil disobedience escalated was involved in arson attacks and even bombings…. In 1906 she obtained her law degree – but being a woman was not permitted to practice…. Instead she used her legal training to produce speeches and pamphlets – she was appointed ‘Organising Secretary’ of the WSPU and earned the nickname ‘Queen of the Mob’….

Christabel was jailed several times and went on hunger strike…. The authorities began to use the ‘Cat and Mouse Act’…. A cruel procedure – women on hunger strike would be released from prison to recover, often after having endured traumatic and painful force feeding, only to be re-arrested to finish their sentences once their health had improved…. Between 1913 and 1914 Christabel lived in Paris to avoid re-arrest…. 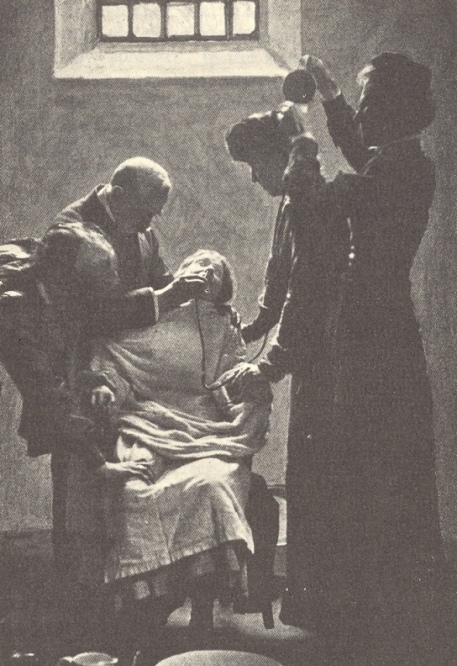 Suffragette being force fed in Holloway Prison circa 1911 – Public domain

Whilst in exile she continued to help run the Suffrage campaign, mainly in an administrative role…. It was at this time the publication ‘The Suffragette’ was founded….

Returning to the UK at the start of World War I Christabel was re-arrested to serve a three year sentence…. However, after immediately going on hunger strike she only served 30 days of her sentence….

At the end of the War some women were granted the Vote and Christabel decided to stand as a Women’s Party candidate in the 1918 General Election…. She was narrowly defeated by the Labour Party candidate standing against her….

Christabel moved to California in 1921…. She became an Evangelist and prominent member of the Second Adventist Movement, later lecturing and writing books on the Second Coming…. She returned briefly to Britain during the 1930s and it was in 1936 that she was created a Dame…. At the onset of World War II she went back to the States, to live in Los Angeles….

On the 13th of February 1958 her housekeeper found her passed away – sitting in a straight-backed chair, there was no obvious indication as to how she had died…. She was 77-years-old…. Christabel was buried in the Woodlawn Memorial Cemetery, Santa Monica, California….