On this day in history : 20th January 1997 – Her Majesty’s Royal Yacht Britannia begins her final official voyage – before she is due to be de-commissioned later in the year….

This last foreign mission was to bring home the Prince of Wales and Chris Patten, who was the last Governor of Hong Kong before the handover to China on the 1st of July 1997….

HMY Britannia was originally commissioned for King George VI – the Queen’s father – but sadly he died even before the keel was laid…. One of the first things Her Majesty did on becoming Monarch was to change the plans for the decor of the Royal apartments of Britannia – she viewed the proposed plans as too formal and ‘stuffy’…. Instead she opted for white-painted walls, mahogany woodwork, brass fittings and chintz covered armchairs and sofas…. She wanted to create the feeling of a ‘country home at sea’…. The only thing she would have liked – but because of regulations was not allowed – was an open fire in the drawing room….instead she had to settle for an electric fire…. 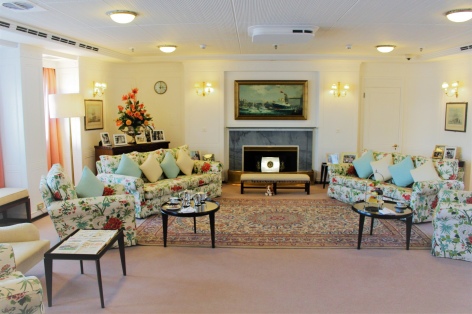 Image credit: gray_um via Flickr
The Queen and the Royal Family loved HMY Britannia…. Her Majesty once described the yacht as being the one place she felt she could truly relax…. The Royal apartments were filled with personal photographs and heirlooms….

HMY Britannia was built at Clydebank, West Dunbartonshire and was launched by Queen Elizabeth on the 16th of April 1953…. She first went into service in 1954; her maiden voyage was from Portsmouth to Grand Harbour, Malta – departing on the 14th of April and arriving eight days later…. She carried Princess Anne and Prince Charles to meet their parents who had just completed a Commonwealth Tour…. Queen Elizabeth and the Duke of Edinburgh embarked on the 1st of May 1954 for the very first time….

During her 43 year service HMY Britannia sailed some 1,087,623 nautical miles…. The 412ft long yacht, which weighs nearly 6,000 tons, completed 696 foreign visits and 272 official voyages on British waters….including annual Royal family holidays…. Known as the ‘Western Isles Tour’, each year Britannia would take the Royals on a cruise around the islands off of the west coast of Scotland…. She was also used for four Royal honeymoons…. Princess Margaret and Anthony Armstrong Jones sailed to the West Indies upon her in 1960 and Princess Anne and Captain Mark Phillips were also carried to the Caribbean in 1973…. In 1981 Prince Charles and Princess Diana enjoyed a Mediterranean cruise for their honeymoon, followed by the Duke and Duchess of York, who sailed to the Azores in 1986…. As recently as 2011 the yacht was used as part of Royal Wedding celebrations when Zara Phillips and Mike Tyndall held a pre-wedding reception onboard…. She has a capacity for 250 guests….

When HMY Britannia was launched she was the largest yacht in the World…. In order for her to sail a crew of 21 Officers and 250 Royal Yachtsmen were required…. When the Royal Family were aboard they would be accompanied by up to 45 household staff, including a hairdresser, surgeon and chauffeur – (yes, a Royal limousine was carried onboard)…. The Royal party would travel with around five tons of luggage….and when she sailed Britannia would always be accompanied by a Royal Navy warship….

The crew, who were accommodated at the front of the yacht away from the Royal apartments, wore plimsolls to keep a tranquil ambience…. Orders were given by hand signals and shouting was forbidden – as was running…. Any work that needed to be done near the apartments had to be done in silence and completed by 8am…. 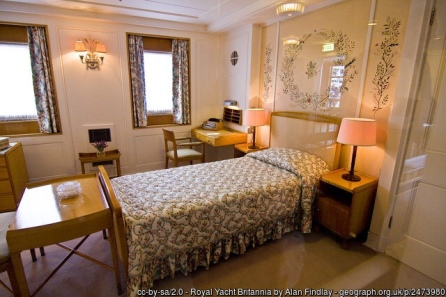 However, HMY Britannia earned her keep…. She was built so she could be converted in to a hospital ship, able to accommodate approximately 200 patients if required during wartime…. Fortunately her services in this capacity were never needed…. In event of a nuclear war the intended plan (with the code name ‘Python System’) was for the Queen and Duke of Edinburgh – along with the Home Secretary – to take refuge onboard the yacht off the north-west coast of Scotland….

She was also used to entertain dignitaries…. American Presidents Dwight D. Eisenhower, Gerald Ford, Ronald Reagan and Bill Clinton all enjoyed hospitality onboard…. Used by the government to entertain prominent business figures HMY Britannia was an Ambassador for British trade and industry….during the period of 1991-1995 she earned some £3 billion for the Exchequer….

Nowadays she earns her keep as an award-winning visitor attraction…. Berthed at Ocean Terminal, Leith, Edinburgh she receives 300,000 visitors per year….

In 1997 the Conservatives committed to replacing her if re-elected…. Labour did not divulge their proposed plans…. On winning the election Tony Blair’s Labour Government announced HMY Britannia’s retirement and that there would be no replacement….

A de-commissioning ceremony was held on the 11th of December 1997 at Portsmouth Dockyard…. At 15.01 Her Majesty was piped ashore for the last time and all the clocks onboard HMY Britannia were stopped…. The Queen openly cried as The Band of HM Royal Marines played ‘Highland Cathedral’….

Since the de-commissioning of HMY Britannia the Queen has twice chartered MV Hebridean Princess – a private charter cruise ship – for a family holiday in the Scottish islands…. But surely, it could never be the same for Her Majesty, could it….