On this day in history : 9th June 1873 – After only being open to the public for 16 days Alexandra Palace in London is destroyed by fire…. Less than two years later a new Palace opens…. 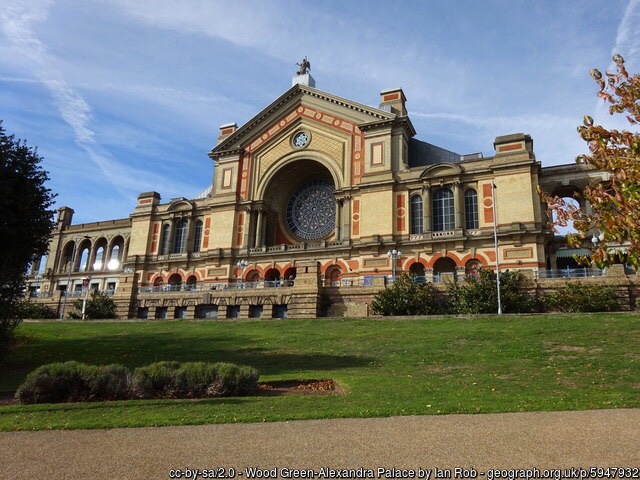 The ‘Palace of the people’ had been an idea conceived in 1859 by Owen Jones, an English-born Welsh architect…. Designed to compliment South London’s Crystal Palace it was to provide the Victorians with a place of recreation, entertainment and education….

Alexandra Palace was built by Kelk and Lucas (who also built the Royal Albert Hall around the same time) – and many of the building materials used were recycled from the 1862 International Exhibition building in South Kensington, after it was demolished…. In 1871 work started on the Edgware, Highgate and London Railway to connect the site to Highgate Station…. Both Palace and railway were completed in 1873….

The grand opening took place on the 24th of May 1873, Queen Victoria’s 54th birthday….with concerts, recitals and fireworks…. In its first couple of weeks over 120,000 people were to visit….but then sixteen days after it opened disaster struck…. A fire in the dome quickly caught hold and all that was left standing were the outer walls…. Three members of staff lost their lives – and a loan exhibition of some 4,700 pieces of historic English pottery and porcelain was destroyed….

However, the Victorians were never ones to hang around…. Within two years, on the 1st of May 1875, a new Palace opened…. Covering 7.5 acres, the new Palace and surrounding Park boasted many features….centred around the Great Hall with its new Henry Willis organ – one of the largest in Europe at the time…. As well as the Hall a museum, lecture hall, library, banqueting room, a large theatre and art galleries were all included…. The grounds held a Japanese village, boating lake, nine-hole pitch and put golf course – and even the Alexandra Palace Racecourse….London’s only racecourse from 1868 until its closure in 1970….

Of course the Ally Pally continues to be a leading venue for arts, sport and entertainment….but not without having to be largely rebuilt once again after being ravaged by fire…. In 1980 much of the building was destroyed when a fire broke out under the Henry Willis organ….