On this day in history : 11th June 1959 – The Hovercraft, an invention by Christopher Cockerell, is officially launched in the Solent – marking a new era in transport….

Cockerell, a boat builder from Lowestoft, had begun working on the design in the mid-1950s…. He had originally been trying to come up with a way of making boats go faster by reducing friction…. His initial ideas came from experimenting with coffee and cat food tins and a hairdryer….

His design was referred to as a ‘man-made flying saucer’….and it was described as ‘a cross between an aircraft, a boat and a land vehicle’…. Being propelled along on a cushion of air created by an on-board fan made it hover just above the surface of water or land….

Cockerell approached the Government for backing – but his design was immediately placed on the ‘Top Secret List’ – as its potential was seen for military use…. This meant Cockerell was unable to develop his idea commercially…. Finally, in 1959 he managed to get his design de-classified and he formed the Hovercraft Development Company Ltd – and managed to secure a grant of £100,000 from the National Research Development Company to develop his project….

An experimental model, 29ft long and 24ft wide, known as ‘SRN-1’ was built at Saunders-Roe at Cowes on the Isle of Wight…. The Duke of Edinburgh visited Saunders-Roe and persuaded the chief test pilot to let him take over the controls…. The Duke flew the craft so hard he had to be asked to slow down…. Later an inspection revealed damage to the bow due to the excessive speed….it was never repaired and became referred to as the ‘Royal Dent’….

SRN-1 was launched officially in the Solent on the 11th of June 1959….and at the same time Saunders-Roe announced another prototype ten times the size was planned…. The hope was that one day Hovercraft would be able to cross the Channel in just 20 minutes….

Within weeks, on the 26th of July, a crossing had been made of the English Channel…. Since then over 80 million people and 12 million cars have been carried across by Hovercraft…. The service stopped in 2000 due to competition from the Channel Tunnel and the ferry companies…. However a service still operates from Portsmouth to Ryde on the Isle of Wight…. 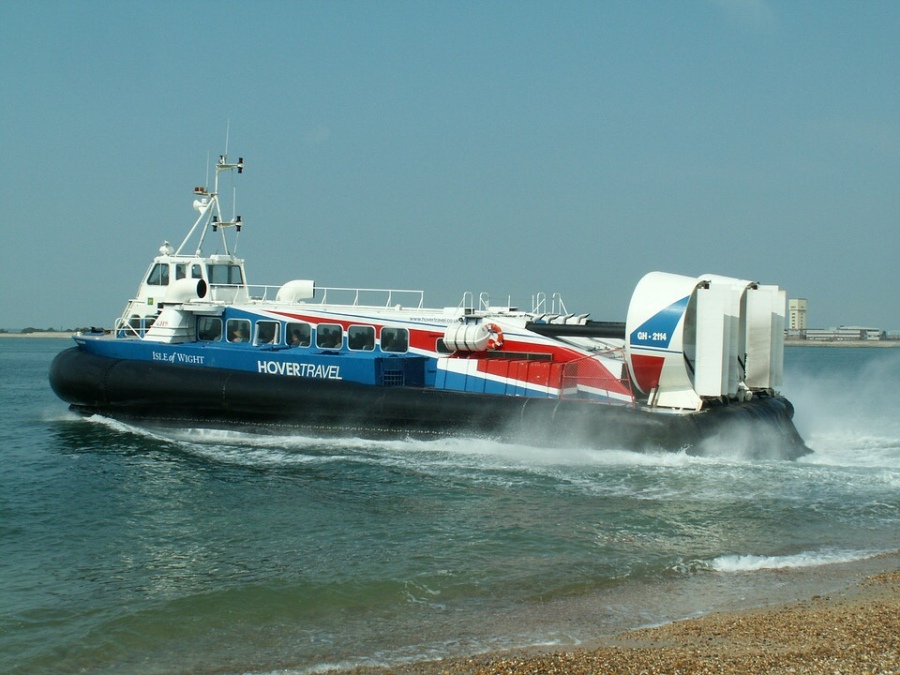