On this day in history : 3rd September 1954 – The National Trust buys Fair Isle, the remote island situated between Shetland and Orkney, in a bid to help secure its future…. 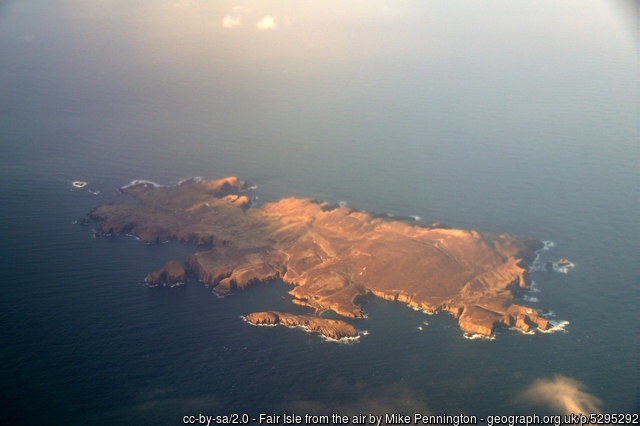 Fair Isle, which is just 3 miles long and 1.5 miles wide, is probably the most remote inhabited island of the British Isles…. and is located 24 miles from the Shetland mainland…. The population of around 60 mostly live on the south end of the island; there is a shop, a community hall, a fire station and a primary school – which typically has between 5 and 10 pupils at any one time…. Older children generally tend to receive their secondary education off the island….

Fair Isle is not connected to the National Grid – but has its own Fair Isle Electricity Company…. From the 1980s this consisted of two diesel generators and two wind turbines…. Since 2018 24-hour electricity has been supplied by three wind turbines, solar panels and batteries….

The main occupations of the islanders include fishing and crofting – and of course the island is famous for its Fair Isle knitwear….which was made popular in the 1920s by the Prince of Wales, who frequently wore a Fair Isle jumper whilst playing golf….

Ownership of the island had changed hands many times over the centuries; in 1900 it had a population of around 400 – but this number was to dramatically dwindle…. From 1948 Fair Isle belonged to George Waterson, an ornithologist from Edinburgh – and it is he who set up a bird observatory, which became recognised worldwide…. Fair Isle is home to many rare species of birds…. Using a grant of £5,000 from the Dulverton Trust the National Trust bought the island with plans to continue research into migratory bird life…. At the time of the National Trust taking on ownership the population of Fair Isle had fallen to an all-time low, with just 45 inhabitants…. In 1956 a conference organised by the National Trust was held on the island to discuss ways of saving its economy…. Nowadays tourism plays a major part….

In 2010 a new observatory was built at a cost of £4m, consisting of a two-storey wooden lodge, capable of accommodating 30 guests…. It even boasted a small bar for the evenings – no doubt proving popular as there is no public house on the island…. Tragically this new observatory was destroyed by fire on the 10th of March 2019…. But the people of Fair Isle are resilient – plans are already well underway and all efforts are being made to reopen in 2021….