On this day in history : 1st November 1993 – The Maastricht Treaty (officially known as the Treaty of European Union) comes into force….

The Treaty marked the beginning of a new stage in the creation of a closer union amongst European countries…. After being involved in two world wars, in the first half of the 20th century, Europe needed a way to secure peace and facilitate economic development…. In the 1950s the European Community (EC) was established; three organisations were set up – the European Coal and Steel Community (ECSC), the European Atomic Energy Community (EAEC) and the European Economic Community (EEC)…. Six nations came together to sign the Treaty of Paris in 1951 to establish the Community;- France, Belgium, The Netherlands, Italy, Luxembourg and West Germany….

The Maastricht Treaty was signed on the 7th of February 1992 reforming the structure of the EC…. The Treaty was signed by 12 countries, the original 6 plus Spain, Portugal, Greece, Denmark, Ireland and Great Britain….and was the first step in the commitment to strengthen the bond within Europe, by integrating and uniting member states…. It granted EU citizenship to everyone with a citizenship of a member state – allowing free movement between states and the entitlement to run for local European Parliament elections, in whichever country of the EU they reside in, regardless of nationality…. 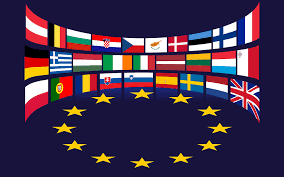 It meant a closer co-operation between the police and judiciary of the member states, creating a unified security policy and covering matters such as the environment and social policy…. It also laid the foundations for the formation of the single currency (the Euro) and establishment of the European Central Bank as a central banking system….

The Maastricht Treaty has been amended by other treaties….but since it first came into force a further 16 countries have joined the EU…. And as we all know….one country has now become the first member to leave….