On this day in history : 10th November 1847 – A passenger ship is wrecked off the coast of Southern Ireland, killing 92 out of the 110 onboard – it prompts the construction of the Fastnet Rock Lighthouse…. 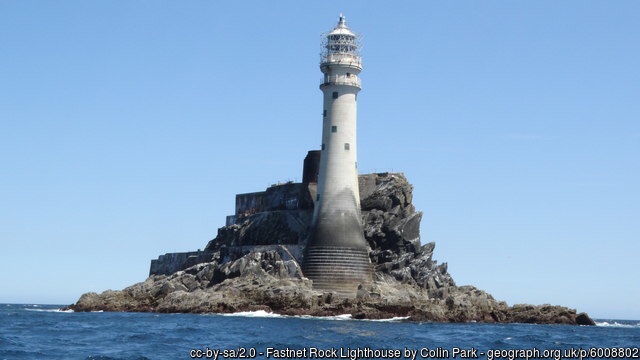 The ‘Stephen Whitney’, a 1,034 ton ship, was built in New York around 1840; it was a fully rigged, wooden vessel and was part of Robert Kermit’s Red Star Line…. It had been named after an investor in Kermit’s Company, Stephen Whitney, one of the wealthiest merchants in New York City….

The ship left New York on the 18th of October bound for Liverpool, with a stop scheduled for Cork…. As well as the 76 passengers onboard it also carried a cargo which included 10,000 bushels of corn, 600 boxes of cheese, 1,000 barrels of flour, 1,000 bales of raw cotton and 20 boxes of clocks…. The voyage across the Atlantic was uneventful but it was as they approached the Irish coast on Wednesday the 10th of November that the weather became hazy making visibility difficult – and then it turned to thick fog…. Captain Charles W. Popham, originally from Cork, mistook Crookhaven Lighthouse for one at the Old Head of Kinsale – which is situated a little further around the coast to the east….

Around 10pm the ship struck the western tip of West Calf Island (between Cape Clear and Skull in Co. Cork) and ran aground…. Within ten minutes the ship had completely broken up….92 out of the 110 passengers and crew onboard perished…. The maritime community had long complained about the positioning of the main lighthouse on Cape Clear – the loss of the Stephen Whitney prompted the replacement of the lighthouse with one on the Fastnet Rock….

Construction of the first lighthouse began in 1853 and it went into operation on the 1st of January 1854…. Built from cast iron with an inner lining of brick, at a cost of £17,390, it was designed by George Halpin…. The tower was 19.43m high with an 8.43m high lantern housing on top – making a total structure of approx. 28m high…. The oil burning lamp put out 38 kilocandelas of light; the average modern lighthouse puts out 1,300 kilocandelas as a comparison….

It didn’t take long for it to be realised that the structure was too weak…. In high winds the tower would shake – to the extent that crockery would sometimes fly off of tables…. Various attempts were made to strengthen it – such as putting a cast around the lower section and filling it with stone….

In 1891 it was decided that it was time to replace it…. The new lighthouse was designed by William Douglass and constructed from stone, as cast iron was now deemed unsatisfactory – although the lower half of the original lighthouse was left standing and was used as an oil store….

Construction began in 1897 and the new lighthouse entered service on the 27th of June 1904; it had cost £90,000 to build…. The tower stands some 45m high and at the base is 16m in diameter…. The original paraffin lamp was replaced by electric on the 10th of May 1969 – and at the end of March 1989 it was converted to an automatically operated lighthouse….The lamp has power of 2,500 kilocandelas and can be seen from a distance of 27 nautical miles….

On the 16th of October 2017 downgraded Hurricane Ophelia hit Ireland; a gust of 191 kph was recorded at the Fastnet Rock Lighthouse…. Had it not of been automated, I wonder if the crockery would have stayed on the tables….