A new year traditionally means a time for new beginnings and the start of 2013 was no exception for a certain swan. Gone were his bachelor days, Floppy now had new responsibilities. In the February, he and Lady started to build their first nest together….

It is the female swan who constructs the nest – a large mound, with a bowl shaped indentation that she forms with her body. The male’s role is to gather and supply the material. Our pair chose the roadside pond as it had a plentiful supply of reeds and bulrushes, ideal nesting material. Swans are unable to carry anything in their beaks for any significant distance, so material has to be close to hand. This first year was very much a new experience for Floppy, he didn’t altogether get the ‘knack’ straight away. He would extend his long neck out, pluck a reed and then stretch back to the pile he was accumulating for Lady….Unfortunately, he hadn’t quite calculated his distances correctly, poor Lady had to keep clambering down off the half constructed nest to retrieve the necessary materials she needed. It was all rather comical for us to watch but thankfully he managed to get the hang of it eventually….

Prior to nest building, Lady had become very demanding where food was concerned. Female swans ‘feast’ before sitting on the nest, as during this period they are unlikely to feed properly, or indeed, if at all. Once on the nest, she will lay an egg every other day and a clutch will be anywhere between one and a dozen eggs. She will then sit on these eggs between 32-37 days….

So, for the next few weeks, Lady took up residence on her nest, while Floppy guarded her. Occasionally he would wander down to see us but he took his duty seriously and it was  seldom that he left Lady on her own for long. Her patience was unwavering  but as time wore on, it sadly became apparent that this first year together, parenthood was not to be…. Eventually, Lady abandoned the nest and it was then that we could see it had unfortunately become water-logged….

However, the pair took it all in their stride and spent the Summer enjoying each other’s company and strengthening the bond between them. As time has a habit of flying by so quickly, it seemed like no time at all before nest building activities resumed once again….

This time, they were far more successful. In May 2014, Floppy became a dad for the first time and oh…! What a proud dad he was….

Once again they had nested on the pond by the road. Jordan and I had got into the routine of stopping alongside on our way out on the school run every morning, to see if there were any developments. One day, as we drew up, to our delight, a little grey head popped out of Lady’s feathers….then a tiny cygnet emerged and proceeded to climb up its mother’s back. In what can only be translated as a gesture of annoyance, Lady plucked her errant offspring from her back and deposited it unceremoniously into the nest beside her….

Over the next few days a total of five cygnets appeared. As they grew and developed, it was to be, that there was one particular one that was far more confident and cheeky than its siblings. Jordan and I are convinced that this was the same, very first hatchling, that we had witnessed annoying its mother on that May morning…. 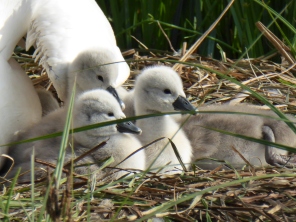 Within a couple of days of hatching, Mum and Dad brought their brood down to the pond near us. Cygnets are independent from when just a few hours old, in as far as they can swim and feed themselves. Being a lovely Spring evening, I was outside in the garden, when I noticed the little troop making its way across the grass between the two ponds. Into the water they went, straight across and out the other side…. It then became apparent something very special was about to happen once again….

Obviously, Floppy was eager to show off his new family and he was determinedly leading them towards me. I stood at the gate as they approached and before I knew it, I had five tiny cygnets squirming around my feet, whilst Dad stood proudly looking on. Lady was more hesitant but seemed to accept Floppy’s judgement. It seems this has now become an annual ritual….each year I get a formal introduction to the new brood. 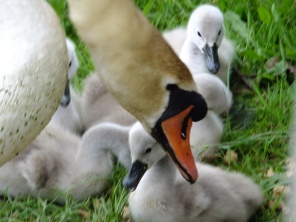 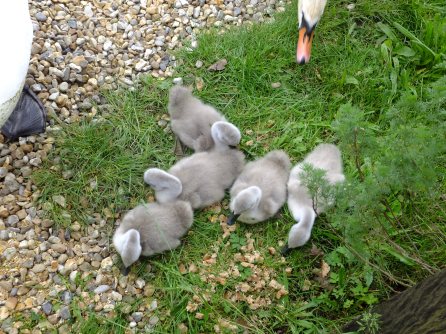 That first year was very much a learning curve for all of us but it soon became evident I was expected to play my role in helping to raise the youngsters. The family took over a patch in the front garden as their designated feeding ground and would appear at regular intervals through out the day. If I was busy and did not notice them straight away, they would just all sit and wait patiently. However, these early good manners did not last long…. Nowadays, if I haven’t responded immediately, one of the adults will come to the back door to fetch me…. 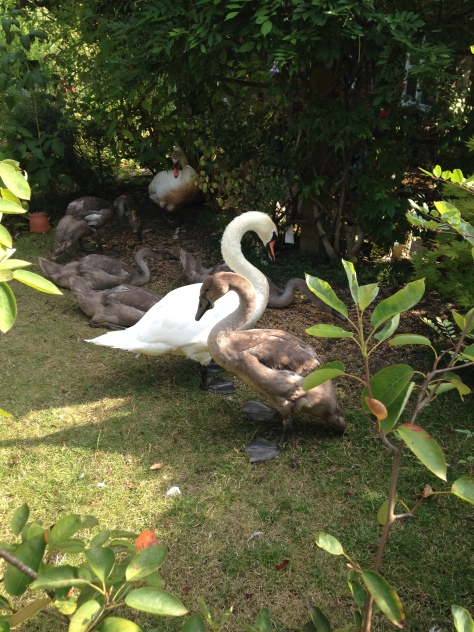 These first cygnets stayed with their parents until just after New Year. Mum and Dad did a good job, teaching the youngsters to fly and how to behave like proper, grown-up swans….Witnessing the flying lessons had its entertaining moments but there were also some hair raising ones. Twice, there were incidents involving over head cables, one time the power was knocked out to a number of houses. Thankfully, no swan was hurt on either occasion. Another time, during a trainee ‘fly about’, a cygnet crash landed on the village tennis courts. Being enclosed by a high fence, the youngster was unable to get out. Fortunately, the gate had been left unlocked, so my neighbour and I were able to shepherd the hapless young swan back to the rest of its family….

Eventually, Mum and Dad decided it was time for their now adolescent offspring to leave home and began the task of driving them away. It is quite upsetting to witness this, I should know better but it is hard not to get attached. Nature can seem so cruel, the cygnets couldn’t understand why the adults had turned against them, they were completely bewildered…. Once the feathers become predominantly white, the parents view them as being ready to go out into the big, wide World….their job is done….

Mum and Dad finally succeeded in seeing their first born brood off….not that they went far….just down the road to a pond nearer to the centre of the village. To start with all five stayed together, then one flew off, (the ‘cheeky’ one – I suspect). Then, sadly, it became evident that one of them had sustained an injury. The RSPCA had to be called out but unfortunately, nothing could be done, the cygnet was suffering too much. Nobody knows what had happened to it, whether it was a fox or dog attack or if it had been injured in some other way….

That left three, who remained together until eventually taking off for pastures new. Usually, young swans will leave the breeding territory and fly until they encounter a new group of swans they can join. If the parents are solitary, as are our two, then the cygnets are very much on their own at this point. If the adults over winter in a colony, then their young will often fly with them to join the larger group. Generally speaking, swans pair up in the first two years of their lives….

Over the following few weeks after their departure, there were several reported sightings of three swans together on various local ponds. I would like to think this particular trio successfully made it through to adulthood….

Meanwhile, Mum and Dad were busy concentrating on making preparations for the next brood….