In raptures with raptors….

Back in the Spring of last year, we (as a family) took part in a Bird of Prey Experience Day. It was the end of March and an unseasonable, bitterly cold day but this did not spoil the absolutely delightful time we had….

We were part of a small group, six in total. Sally, our hostess and falconer introduced us to her many birds; European Eagle owls, Barn owls, Harris hawks, Peregrine falcons to name but a few…. She showed us the equipment every falconer needs to use; hoods, jesses and lures….and then we got the opportunity to handle the birds and fly them…. 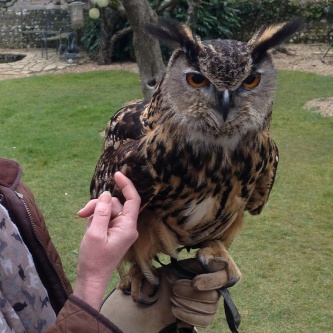 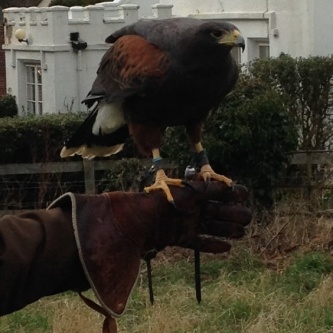 British birds of prey are protected under the Countryside and Wildlife Act 1981. In the UK it is permitted to carry out hunting with raptors without having a special licence, although it is a stipulation that the birds must be bred in captivity. The Secretary of State for the Environment can issue licences enabling birds to be either taken from the wild or imported but very few are ever issued. To import or remove birds (or eggs) from their natural habitat without a licence is a criminal offence. Birds must be ringed and registered to help combat the black market….

Captive breeding began in the early 1970s. Peregrines especially, were  suffering a decline in the wild due to pesticides being used in agriculture.

Owls are sometimes used but are less common. They rely on sound more, as they see in black and white and are long sighted….(a raptor’s sight is ten times greater than a human’s)…. When owls are used, it is more likely to be the European Eagle owl, Barn owl or Great Horned owl….

When starting out in falconry it is strongly recommended training is sought from an experienced falconer…. Most beginners start out with Harris hawks and Red Tailed hawks….

The Red Tail hawk is easy to breed in captivity. They are known for their brick red coloured tail feathers. Native to the USA, they are North America’s most common hawk, they are also found in the West Indies. They are very adaptable to their surroundings, living in environments as diverse as tropical rain forests and mountains alike, quite happily. These keen eyed birds of prey are efficient hunters of rabbits, hares, squirrels, ducks, pheasants and geese….

The Harris hawk, also from the USA, originating in Texas, Arizona and northern parts of South America, is once again a keen, efficient hunter. It is unique amongst its raptor counterparts because it lives in packs in its natural habitat. Being used to social hierarchy, it makes it easier to train….

Raptors need considerable human contact on a daily basis or they will soon revert back to their wild state. ‘Manning’ is an essential part of training, acclimatising the bird to live and work with humans, involving all areas where human and bird lives cross – this even includes housing, car, pets etc…. The better manned they are, the calmer they will be and easier to train and fly….

The trainer wears a gauntlet on which the bird will be taught to perch upon, by being fed with morsels of food, (food becomes an important bond between bird and human). Once used to ‘sitting on the fist’, the bird will then be encouraged to fly between the perch and fist, always with the reward of food. A creance can be used at this stage – a long, light line that attaches to the bird’s jesses….

The jesses are strips of strong leather, (or often kangaroo hide these days, used because of its softness), that attach to the raptor’s legs. The jesses need replacing regularly to ensure they still fit and are comfortable….

Bells are also fitted to the legs, with leather strips called ‘bewits’. The bells can be heard from a considerable distance and enable the falconer to locate the bird when on flying exercises. Nowadays, it is not uncommon for a transmitter to be fitted incase the bird gets lost….

Also, raptors are trained for the ‘lure’; usually made from leather, with feathers attached, the lure is a representation of prey…. The falconer swings the lure around on a cord for the bird to chase for exercise, or to ‘call’ it in. There are at least three types of lure used; short line, long line and pole line….

Another necessity for successful training and flying is a hood…. They are used to keep the raptor calm. Not being used to sudden movement or change in light, they can be easily startled and may attempt to jump from the fist and harm themselves; similarly, they may get over excited about the prospect of going out…. Not being able to see makes a bird think it’s safe and calms it down. The falconer needs the bird to be alert and ready when it is required to fly…. 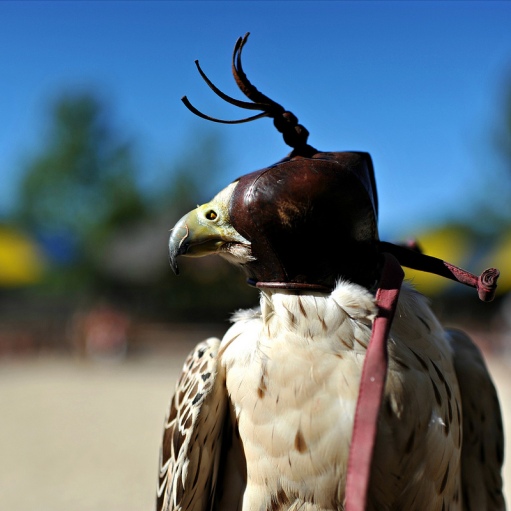 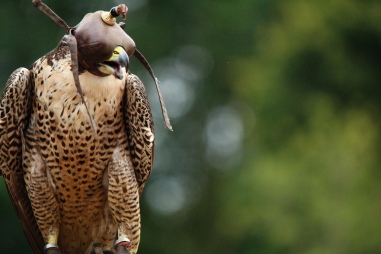 The hood is made from kip leather or kangaroo hide: there are two main types of hood:- The Anglo Indian, which is made from one complete piece and the Dutch hood, which is made from three separate pieces. This second hood is made on a special mould, to fit the raptor’s head, allowing space for the eyes and a good fit at the neck. The hood must be a good, comfortable fit – or the bird will reject it, making training difficult….

It is thought falconry began in Mesopotamia some 4,000 years ago. Tradition says the first falconer was the King of Persia. It is said the King was entranced by the beauty of a wild falcon capturing a passing bird. He ordered that the falcon be caught and he then kept it at his side at all times….

As trade began to increase between Arabia, Europe and the Far East, so did the interest in falconry. It had reached the Mediterranean by 400AD and by 875AD was practised widely throughout Western Europe and Saxon England.

In fact, it was something of a craze – a way of life for many – one that was to last for centuries, the peak of interest being between 500AD and 1600AD. In Mediaeval society, as well as being a very popular sport, it was a status symbol with strict hierarchy for raptor ownership:- 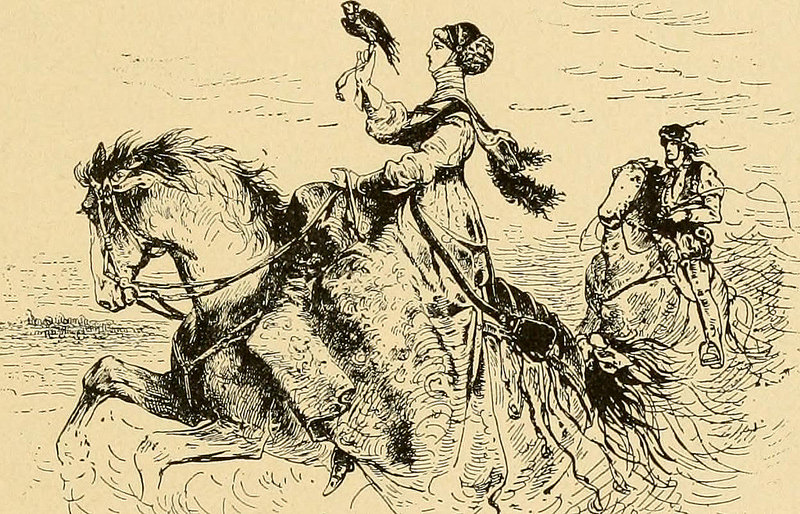 Such was the class system in Mediaeval times, that to own a bird above social rank could result in the offender’s hands being cut off!!

The first documented English falconer was Ethelbert II, Saxon King of Kent (followed by Alfred the Great). Until 1066 only native birds had been used in the UK but after the Norman Conquest new species were introduced. Falcons became so highly valued, they were quite literally worth their weight in gold. They were used as peace offerings. In 1276 the King of Norway sent eight gyrfalcons to Edward I as a sign of peace. In 1552 Czar Ivan IV of Russia and Queen Mary I exchanged a gyrfalcon and a pair of lions, when the two countries established diplomatic relations. Ancient tradition has it that the English Monarch is presented with a falcon, by the Duke of Athol, Lord Derby and the Officer of the Royal Falconry (Master of the Mews), at the time of coronation; a tradition that still continues today….

Because of their extreme value (in Mediaeval times), strict laws came into force in England, to protect birds of prey. To take eggs from a nest would mean a year’s imprisonment; to steal a bird could result in the thief’s eyes being poked out as a punishment! It could be said these laws were the origins of wildlife conservation….

The majority of birds used were caught in bow nets which were set along the migration routes of the birds of prey in Holland. Valkenswaard, the Dutch town (which was then still a village), became solely reliant and prospered upon trapping birds and manufacturing falconry accessories. Every autumn a bird auction was held, with visitors attending from far and wide. It was a trade that did not die out completely in Valkenswaard until 1937.

During Mediaeval times falconry was viewed as a sport, art and a way of hunting for food; for many households it was one of the main ways of obtaining meat. Gyrfalcons were used for catching rook and herons, which were considered delicacies centuries ago and so were reserved for Royalty and the upper classes.

Tercels were employed to catch snipe or partridge and Goshawks for hare, rabbit, pheasants and other large game birds. Much of Mediaeval life was governed by custom and tradition; permission of the land owner had to be sought in order to hunt. If, for example, some one was caught illegally hunting on the Monarch’s land, it could result in death….

For the upper classes, falconry was used as a social excuse to host hunting parties. The Kings of England and France, the Russian Czars and Holy Roman Emperors all had huge falconry establishments and employed hundreds of the finest falconers. Higher nobility spent little time training the birds themselves, this was left to the Master falconers, who were capable of earning a very high wage…. Training could be a very cruel affair. Raptors often had their eyes ‘stitched up’. The thread would then be tied back over the bird’s head so the trainer could pull the eyes open and shut; this temporary blinding supposedly made it easier for training….

Even after the decline of using birds of prey to hunt for food, the social standing of falconry remained; it had become an ingrained way of life….The Clergy was particularly fond of the art, even a nun would often have been seen with a bird on her wrist. Bishops complained about the frequency of raptors being taken into Services, as they interfered with concentration….

Gradually, by the 17th and 18th Centuries the popularity of falconry began to die out. With the collapse of the feudal system in Europe and the invention of the shot gun, these majestic birds no longer held such high esteem in society. In time, they became seen as vermin, nests were destroyed and birds killed. This escalated, coming to a head in the first half of the 20th Century, when they became seen as direct competition for prey, by hunters with guns….

Nowadays, because of careful conservation, it is becoming an increasingly familiar sight to see birds of prey in the wild….

Falconry as a pastime is also enjoying huge interest, helped by the popularity of ‘experience days’. It is possible to get a ‘taster’ of what the sport entails, maybe encouraging people to train and take up the activity themselves – or at the very least learn about and become more aware of these wondrous creatures….

I, for one, will never forget the fantastic day we had as a family at http://www.westsussexfalconry.co.uk …. 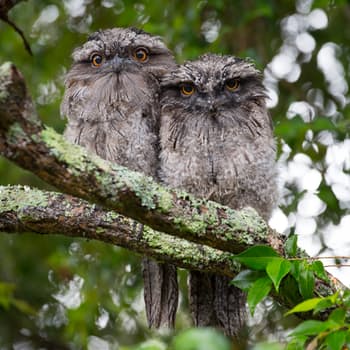 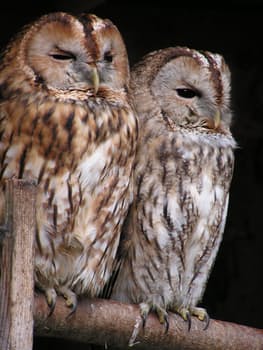 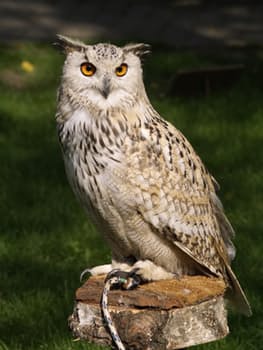 One thought on “In raptures with raptors….”