Standing at the cross roads….

Ever found yourself at a cross-roads wondering which way to go? That’s where I am right now – hypothetically of course….

In 2008, I took a room in an antiques centre, located in a former mill. It is a rambling, quirky, centuries-old building – home to some 70 dealers, a real Aladdin’s cave, brimming with all manner of antiquities.

I filled my room to the rafters with all sorts of vintage and antique goodies; china, linen, collectables, paintings, small items of furniture…. As far as I was concerned I was indulging my passion and earning a living at the same time…. 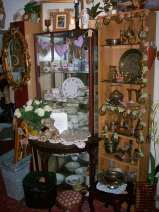 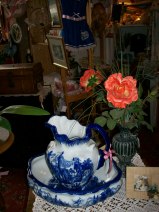 It was November 2015, I was at home alone, working on some pieces for the Mill, with the radio on for company – when there was a news flash….a local antiques centre was on fire…. I knew instantly it was us….

I was incredibly lucky, my room was completely unscathed; unlike many of my fellow dealers who lost their entire stock, if not to the fire itself but through smoke and water damage. It was heart breaking….

What followed was a frantic few days of packing boxes and shifting furniture to clear the building. Being November, daylight hours were restricted, there was no electricity, it was cold, damp, with the smell of smoke thick in the air – safety measures required hard hats to be worn…. Still, resolve and morale remained high – we were all convinced we would be back in and trading again come Summer….

That was 18 months ago – due to complicated insurance issues work has not yet begun to repair the damaged building; meanwhile, my stock is in storage – waiting….

I love the Mill, I find it hard to imagine trading from anywhere else. I have viewed another centre and I have dabbled at selling on-line….but I soon discovered that wasn’t for me…. So, up to this point I have simply chosen to ‘wait it out’. However, since it is now painfully apparent nothing is going to be resolved in the near future, decisions have to be made….

I could look for an alternative venue, continue to wait or dispose of my stock through auction and consider a new career challenge…. at least I have choices. Being a woman in the 21st Century I am free to make my own decisions, which is probably more than could be said for the womenfolk who have lived in this house before me….especially those in its very early days….

Most people in Mediaeval Europe and Britain lived in small rural communities and made their living from the land. In some respects the life of a peasant woman was less restricted in the confines of her class than those in aristocracy. Generally, women had little control over the direction their lives took them in. Society in the  Middle Ages was heavily influenced by the Bible….women were deemed inferior to men, morally weaker and likely to tempt men into sin….all this stemming from Eve. Women were conditioned to remain silent, letting their menfolk make decisions on their behalf. Fathers arranged marriages for their daughters, who were usually married off as teenagers and then became responsible for managing their new home, whether a castle or a hovel….

A peasant woman’s day may have typically started at 3am. She would have been expected to work in the fields alongside her husband; ploughing, sowing, harvesting, haymaking….

There may have been livestock to raise – lambing in the Spring, shearing mid-June. Poultry needed tending (nearly always a woman’s job)….and of course, she also needed to manage the household chores too. There would have been cheese, butter and bread to make, food to be preserved ready for the Winter, the vegetable plot would have needed maintaining – growing vegetables for the family’s pottage…. A certain amount of time would have been spent foraging for nuts, mushrooms, berries and fruit…. Floors had to be swept and straw replaced, rush lights needed to be made. She would have sewed new clothes for the family, washed and mended when necessary…. Then she would have to have found time for her spinning and quite possibly weaving too…. Unless living as a free-woman and hence excused, she would also have been expected to help with the harvest of her lord as well as that of her own family’s land…. On top of all that, she probably had a tribe of children to bring up….

Knowledge of a trade could have made a girl a good marriage prospect, especially if it happened to be one that could be run from home, such as weaving, brewing or baking. Extra income for the household was always welcome….

Cottage industries were small businesses where people produced their own goods and sold them either from home or by ‘hawking’ them in the streets, possibly using a mobile cart. A small business would have been eligible to join a guild, an association of artisans or merchants. Most small businesses were owned and registered with the guild by a man – his wife, daughters, sisters and mother were his ‘workforce’. Women connected to a family business would have been allowed to join the guild via their fathers or husbands. By learning the family trade, very often a woman would have been permitted to continue the business in the event of her father or husband’s death. Sometimes, although it was the man of the house registered as the owner, it could be the woman who ran the entire business….

Even if a woman was a member of a guild, generally she was still very restricted. For example, a pastry maker was only permitted to carry one box of biscuits at a time in order to sell from….and of course, women were paid less than their menfolk even if they were doing the same job. Many widows inherited property and businesses and were able to carry on and run them very successfully, sometimes they became very financially well-off; if this were the case it was often not in her best interest to remarry…. Some widows ran the financial side of their deceased husband’s business but would have had employees to carry out the work….

After the black death new opportunities arose for women wishing to prosper. Due to a shortage in the skilled workforce a woman with a trade could rent premises, take on apprentices and run a business; she could even write a will to determine what would happen to it in the event of her death…. Married women could choose to trade separately from their husbands, they were known as ‘femme soles’. In order for a woman to do so, she had to make a public declaration of her sole status and to be able to trade her application had to be approved and granted. Those in urban areas may have become shop or inn keepers. London’s population halved after the plague, opportunity was everywhere for women. In the early 15th Century one third of brewers paying dues to the Brewers Company were women, some were single, some married, some widowed. However, there is little evidence of women being in public office, where they may have had authority over men….and as the population recovered and increased women faded back into the background, once again it became a man’s World….

Many women had multiple jobs to help make ends meet….very often she would have had her children in tow; as soon as they were old enough they would have been expected to help out….

Some women may have held the position of a domestic servant to a wealthier family. There were other employment options as well of course, prostitution was one…. Although frowned upon by the Roman Catholic Church and regarded as a sin, it was tolerated to a degree as the belief was that it helped curb rape and sodomy; towns and cities had designated areas where prostitutes could ply their trade…. Midwifery was solely a female occupation; although English universities barred female medical practitioners, midwives delivered babies and attended to other women’s health matters, as men were terrified of childbirth…. Midwives had no formal training as such, they relied purely on experience….

Childbirth in the Middle Ages was an extremely risky business, both for mother and infant; in fact childbirth was the greatest hazard a Mediaeval woman faced…. If a woman survived her childbearing years she was likely to outlive her husband. There was no real medical help available if problems arose, no procedures or techniques when dealing with breech births. If the pelvic opening was too small for the baby’s head nothing could be done; Caesarean sections were only performed if either mother or child had died and were carried out without anesthetic….

Any mother will tell you giving birth is no picnic but when we consider the horrors that childbirth in the Middle Ages often entailed, it is hardly surprising to learn that many women found the thought of becoming a nun a more attractive prospect than becoming a mother…. Nearly 10% of women in Mediaeval England and France never married in the traditional sense – many opted to marry the Church instead. Indeed it had its benefits….it gave the opportunity to gain an education; many writers, artists, educators, healers and botanists gained their knowledge through the Church….

Although women were restricted in what was essentially a World run by men, there is little doubt that without the sheer gutsiness of our Mediaeval sisters, the World at that particular time would have come to a grinding halt…. There is that familiar saying: ‘behind every successful man stands a strong woman’….which appears to have its origins in the 1940s – but I wonder if it was inspired by women of the Middle Ages….

I, for one, am thankful I am a woman of now, rather than then…. I can make my own decisions, follow the career path of my choosing – my destiny is not determined by my husband’s trade…. Good job really, I can’t imagine myself wielding a chainsaw….

2 thoughts on “Standing at the cross roads….”