So, after an almost six-week wait, they’re finally here! This year’s cygnets arrived on Saturday 6th May…. Lady’s patience – sitting on her nest – has been rewarded with seven gorgeous, fluffy, grey bundles of joy…. 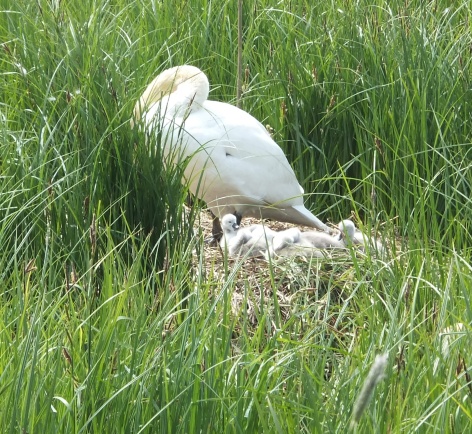 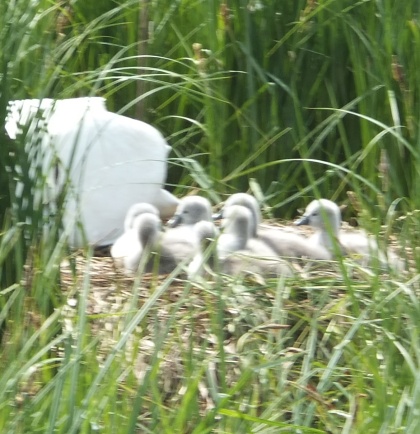 The first two days were, as in previous years, spent on the nesting pond; swimming lessons began in earnest on Sunday….

Monday, the new family made its way down to the pond by us and I was given the customary formal introduction. This is the fourth time this privilege has been bestowed upon me and I found it no less surreal this year than in previous ones – it truly is an honour…. 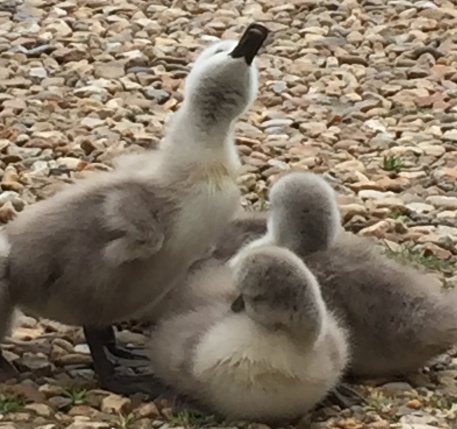 Mum and Dad stayed for about fifteen minutes to introduce their new family and then took the young brood back to the water, where they remained until the following morning….

Now the worry begins….Mr. Fox is never far away. Last year was disastrous; out of the five cygnets that hatched, only one survived, Mr. Fox claiming four in one morning, when they were only a few days old…. How? Well, because for some reason only be-known to themselves, every year Mum and Dad enjoy taking their youngsters on hiking expeditions around the village. On this particular occasion they somehow managed to leave one of their offspring behind on the pond…. Ironically, this is the one that survived….

Aware that the grass on the common is especially long at this time of year and provides good coverage for a sly, awaiting fox, a path has been cut between the two ponds… The idea being to provide the swan family with a safer route as they to-and-fro…. You would think Mum and Dad would be grateful, wouldn’t you? No, what they’ve actually done defines the term ‘bird-brain’! They have taken all seven babies on a marathon hike to another pond within the village; a walk that involves negotiating steep banks, ditches and a main road! Thankfully, the whole family made it to the other pond safely but now, if true to form, they will return and have to repeat the whole hazardous journey…. Why do they do this? We have no idea, there is no rhyme or reason to why they should expose their young family to so much danger…. I can only assume they are bursting with pride and want to show their new brood off….

Putting the urge  to wander aside, our two are generally excellent parents, protecting and defending their babies diligently….

The female mute swan (Cygnus olor) lays between 4 and 10 eggs which she will then incubate for approximately 36 days, (sometimes with the male’s help – but not in the case of our pair). Cygnets hatch between May and July and then remain with their parents for an average of seven months. When they are between three to four months old they usually begin to learn to fly…. (I say ‘usually’, as this pair are somewhat neglectful at teaching this particular skill). It is also about this time that the cygnets begin to gain their white feathers; once they are predominately white, Mum and Dad will begin to chase them off…. Of course, there is no exact timetable, things vary from family to family; in fact, last year’s cygnet remained with his parents until he was almost nine months old….

For a pair of mute swans who have a tendency to produce ‘Polish’ swans amongst their brood, things may be very different again, from the normal up-bringing….

Polish swans were first imported to London around 1800, from the Polish coast of the Baltic Sea. Poulterers were convinced they had discovered a brand new species of swan and even gave it the name ‘Cygnus immutabillis’ – meaning ‘changeless swan’. However, they are not a different species but a mutation of the familiar mute swan. Instead of the smokey, grey colour we associate with new cygnets, those of the Polish swan hatch pure white and have pinky-grey legs and feet rather than the usual dark grey. They are not (as sometimes perceived) albino, as there is pigmentation present in the eyes – they are, in fact, a colour variant….

What causes this, is a pigment deficiency in a gene of the sex chromosomes. Female birds have two different sex chromosomes (ZW), whereas males have two of the same type (ZZ). Sometimes the female inherits one that is melanin deficient; this will make her a Polish swan. A male swan born to the same parents will be normal, unless he has two mutated forms of the gene. If a Polish and ‘normal’ swan breed their cygnets will be a mixture of normal and Polish – of either sex….

Early records of the morph can be traced back to the 17th Century. In some Eastern European countries, Polish swans can make up to 20% of the population; in Western Europe it is typically just 1%. Here in Britain there are reports of them in Kent, Essex, Suffolk and Norfolk….

Obviously it is difficult to tell at first glance if an adult mute swan is Polish; the giveaway is the pinky-grey colouring of the feet and legs. The cygnets are far more obvious, being pure white when they hatch…. This can be a distinct disadvantage to the Polish cygnet – there have been cases of the parents drowning them…. Generally there is a higher mortality rate amongst Polish swans…. instead of moulting into the usual brown feathers of the normal cygnet, the Polish will gain its white plumage immediately; this could result in the parents chasing it off long before it is ready to leave the protection and safety of the family unit….

There is an indication that those who do survive will breed earlier than their counterparts…. In the wild, male swans pair off later than their female siblings. Females usually find a mate in their second year and will often breed in their third. Young males are not normally strong enough to defend a territory until they are three or four years old….and do not gain their full, mature adult appearance until this time.  Indeed, I for one have been caught out by this…. I was convinced our very own Dad swan was a female in the beginning, when he was in fact a juvenile male….he still gets called ‘Penelope’ from time to time….

So, now our new arrivals begin their journey to adulthood…. I am pleased to report that whilst writing this the family has arrived back from its jaunt – and all are safe and well. Hopefully, they have got the wanderlust out of their systems for the time being and we can all settle down  and get on with the feeding regime…. 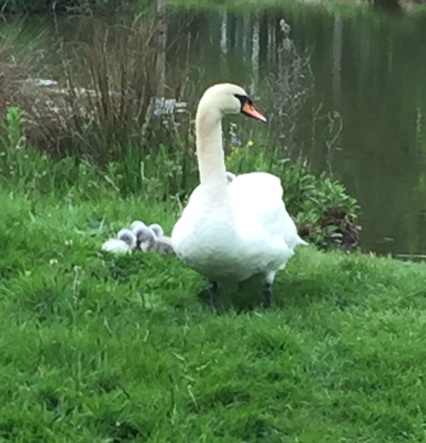