If you are born in the month of June, then you are lucky enough to have not one but three main birthstones….

Perhaps the most well-known is the pearl. Unlike most gems – (which are found within the Earth) – pearls are formed in the shells of oysters, clams or mussels and are organic in origin….

A particle of rock, a grain of sand or a parasite may find its way into the mollusk’s shell…. As it becomes an irritant the creature then encases the foreign body with layer upon layer of the material that forms its shell. This material is actually a relatively soft form of a carbonate mineral called ‘aragonite’ – and when pearls are formed inside the shell they are often very irregular in shape and have little commercial value. The pearls that are sought after are the ones that form within the tissue of the mollusk; these are spherical or teardrop in shape and are perfect for jewellery making…. Today oyster farms produce a steady supply of ‘cultured pearls’….

Kokichi Mikimoto was the creator of cultivated pearls and Japan is famous for its cultured pearls; Australia and the Pacific Islands are also well-known for them. Oysters that are two or three years old have an irritant, such as a fragment of mother of pearl, inserted into their fleshy part – they are then submerged into water in mesh bags and fed for up to 7-9 years – then they are harvested for their pearls….

Some of the most exquisite pearls are found in Sri Lankan waters and the Persian Gulf; with their soft cream colour they are known as Orientals. Pearls can be found in fresh water too, (known as freshwater pearls), for example – in mussels in the forest streams of Bavaria, Germany and the Mississippi River….

Generally we think of a pearl as being white or a soft cream; however, depending on the environment and the species of mollusk colours can vary – green, lavender, yellow, blue, grey – even black pearls (found in the Gulf of Mexico and the waters of certain Pacific Ocean islands)….

The most beautiful pearl ever (considered by experts) is ‘La Peregrina’ – or ‘The Wanderer’ and was once given by the actor Richard Burton to his wife, Elizabeth Taylor; but the gem has a much longer provenance than that…. Originally it was found in the waters of the Panama by a slave in the 1500s ~ who used it to buy his freedom…. In 1570 the pearl was given to King Phillip II of Spain; the pearl was mounted in platinum, its one and a half-inch length adorned with diamonds. It then came into the hands of England’s Queen Mary I and then into those of Prince Louis Napoleon of France. He sold it to Britain’s Marquis of Abercorn, where it remained in the family until 1969 – when they put it up for sale at Sotheby’s; which is where Richard Burton acquired it….

The largest pearl ever is believed to be the ‘Pearl of Asia’, weighing over 5oz and measuring about 3 inches long and 2 inches wide…. The Shah Jahan of India gave it to his favourite wife, ‘Mumtaz” – he must have adored her as it was also she he built the Taj Mahal for….

Pearls were thought to have medicinal properties and were used in Europe until the 1600s to treat various diseases, including insanity. Even today medicine in Asia uses ground-up low-grade pearls….

Pearls are believed to bring longevity, wealth and power…. And – we all know that saying “Pearls of wisdom”…. a biblical term – “that to waste wisdom on fools is like casting pearls before swine”….

The second birthstone associated with June is Alexandrite – an extremely rare gem which is highly desirable. It is named after Czar Alexander II, when he was still Prince Alexander of Russia, as the stone was first discovered in an emerald mine in Russia’s Ural Mountains during 1839 and on the Prince’s birthday…. 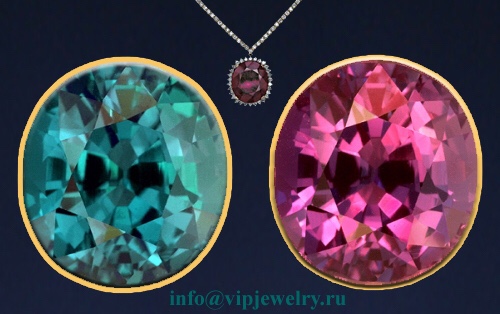 Alexandrite is unusual in that it changes colour according to the light…. In day light it is green, occasionally with a blue tint. However, in artificial light it becomes violet, or a reddish-purple…. Sri Lanka is the main source of Alexandrite but has also been found in Brazil, Tanzania, Zimbabwe, Madagascar and Burma….

Because the gem is only a relatively recent discovery there has been little time for myths and legends to surround it….but in Russia particularly it is believed to being luck….

The third birthstone for June is the Moonstone; so named as silvery rays appear within the gem as it is moved around, resembling moonbeams. ‘Pliny’ – an ancient Roman historian, believed the moonstone changed in colour with the different phases of the Moon; this belief remained widespread amongst people until the 1500s. Ancient Romans also thought the image of the goddess of the Moon, Diana, was captured within the gem….

Moonstones belong to a family of minerals called feldspars – roughly 50% of the Earth’s crust is made up of feldspar. The best moonstones are found in Sri Lanka but they are also found in the Alps, Madagascar, India and Burma. A common variety of the gem is labradorite which is a popular choice for jewellery. Those who wear moonstones are thought to be brought the power of wisdom, victory and health…. In India moonstones are often displayed upon yellow cloth – the colour being sacred…. It is believed a spirit lives within the gem that is meant to bring good fortune….