On this day in history : 28th July 1865 – Scotland’s last public execution takes place…. A crowd of reportedly 100,000 watch as Dr Edward Pritchard is hanged for the murder of his wife and mother-in-law….

Pritchard, born on the 8th of December 1825 in Southsea, Hampshire was the son of a sea captain….and claimed to have studied at King’s College Hospital, London, graduating in 1846…. How much truth is in this is unclear – but he did manage to secure the position of assistant surgeon onboard HMS Victory – and went on to serve on various other ships, which enabled him to travel the world….

On returning to Portsmouth he met Mary-Jane Taylor, the daughter of a wealthy silk merchant from Edinburgh…. The couple were married in 1851 and went on to have five children….

Pritchard took a job in Yorkshire as a GP…. During this time he wrote several books on his travels whilst in the Navy…. He also wrote about ‘water cure’ – or hydrotherapy….and had numerous articles published in The Lancet…. In 1859 he moved his family to Glasgow – it seems with his reputation tarnished as it appears some kind of ‘incident’ had occurred….

On the 5th of May 1863 a fire broke out in the family home at 11, Berkeley Terrace, Glasgow…. It started in the room of 25-year-old servant Elizabeth McGrain…. Strangely she made no attempt to escape – which would suggest she was unconscious or perhaps even already dead…. No charges were ever brought but there were those who had their suspicions….

The family moved to a new address in Glasgow, 131 Sauchiehall Street….and in early 1865 Pritchard’s wife, Mary, became ill…. Pritchard, aided by his colleague Dr Paterson,treated her at home…. On the 10th of February 70-year-old Jane Taylor arrived to nurse her sick daughter – but on the 28th of February she herself was to unexpectedly die…. Just over three weeks later, on the 18th of March, 38-year-old Mary-Jane also passed away….

Paterson, his suspicions aroused, refused to sign the death certificates, although he did not go to the authorities…. Pritchard however, had no such qualms at signing…. The death certificates recorded that Jane had died from paralysis and apoplexy – and his wife from gastric fever…. Both were buried at Grange Cemetery in Edinburgh….

Although Paterson had not publicly reported his suspicions the authorities did however receive an anonymous letter…. The information in contained was enough to prompt an order for the bodies to be exhumed…. Both were found to contain the poisons tartanised antimony, aconite and opium…. It appears Pritchard had been poisoning the food of his wife and mother-in-law….

Pritchard’s five day trial took place in Edinburgh in July and was presided over by Lord Justice Clerk, Lord Glencorse…. He was found guilty and sentenced to hang…. Following his conviction Pritchard wrote a confession but claimed innocence at the murder of Jane Taylor….

He described how he had been having an affair with servant Mary McLeod…. It had begun in the summer of 1863 and in 1864 she had become pregnant…. Pritchard helped ‘produce a miscarriage’…. He claimed his wife knew of the affair – but his mother-in-law had caught the pair together in his consulting room…. He also implicated that McLeod was an accomplice in the murder of his wife….

However, nine days before his execution date Pritchard made a further confession, exonerating McLeod saying he alone was responsible for both of the murders…. At 8am on the 26th of July at North Prison, Saltmarket, Glasgow – in front of a crowd of possibly 100,000 – Pritchard met his executioner….one Mr William Calcraft….

British official photographer – Public domain
The flight lasted for 31 minutes and was piloted by Chief Test Pilot John Cunningham – who was also known as ‘Cats Eyes Cunningham’ – having been a famous night-fighter pilot during World War 2…. He also flew the de Havilland Comet at the Farnborough Air Show in 1949 before the start of its flight trials…. 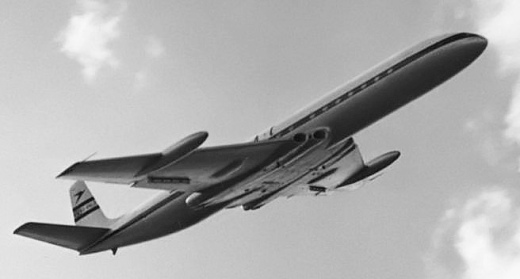 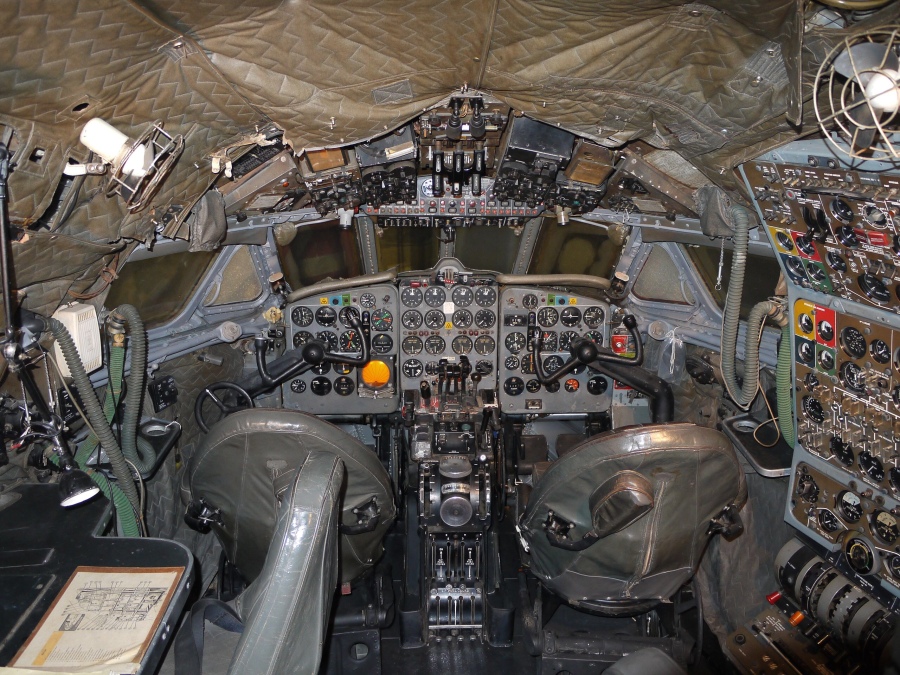 On this day in history : 26th July 1745 – The first ever recorded ladies’ cricket match takes place, near to Guildford, Surrey – between the villages of Hambledon and Bramley….

“The greatest cricket match that was played in this part of England was on Friday 26th of last month, on Gosden Common, near Guildford, between eleven maids of Bramley and eleven maids of Hambledon, all dressed in white. The Bramley maids had blue ribbons and the Hambledon maids red ribbons on their heads. The Bramley girls got 119 notches and the Hambledon girls 127. There was of both sexes the greatest number that was ever seen on such an occasion. The girls bowled, batted, ran and catches as well as most men could do in that game”….

The first known women’s cricket club was formed in Yorkshire in 1887 – and was called ‘The White Heather Club’…. Three years later a team known as the ‘Original English Lady Cricketers’ was formed…. This first-ever recorded paid women’s cricket team toured England between 1890 and 1892 – and apparently made quite a tidy sum…. However, their manager absconded with the money….

On this day in history : 25th July 1795 – The first stone of the Pontcysyllte Aqueduct, which carries the Llangollen Canal over the valley of the River Dee in Wrexham, North East Wales, is laid….

Pontcysyllte means ‘the bridge that connects’…. Designed and built by Thomas Telford and Williams Jessop it was considered a masterpiece of creative genius….and took around 10 years from design to completion….

Conceived as a waterway without locks the 307m long, 3.7m wide cast and wrought iron construction allows a cast iron trough to be supported 38m above the river on arched iron ribs…. The light but strong archways are in turn supported by 18 hollow masonry pillars; each of the 18 spans being 16m wide….

The mortar used was a mixture of lime, water and ox blood…. This may sound macabre but blood had been used in mortar for centuries; the haemoglobin found in blood helps strengthen mortar which is exposed to the elements – as it protects from breaking up in the freeze-thaw temperature cycles of climates such as ours here in Britain…. 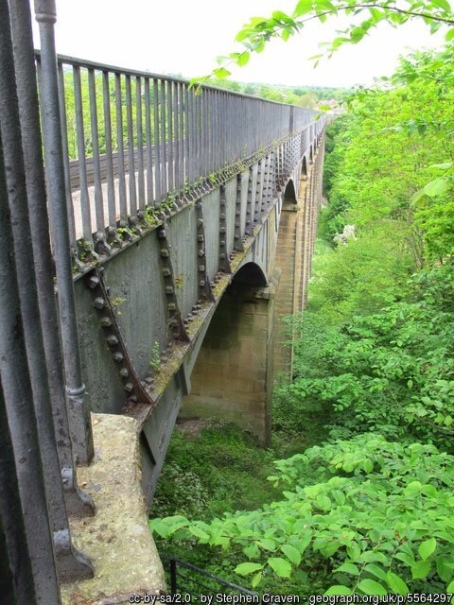 Above the 1.60m deep water trough a towpath was built and railings added to prevent pedestrians and horses from falling…. The project cost around £47K to complete – that is less than £4m in today’s terms…. The aqueduct was officially opened to traffic on the 26th of November 1805…. Since then it has been closed once every 5 years and the water drained to allow inspection and maintenance…. On the 27th of June 2009 the Pontcysyllte Aqueduct was made a World Heritage Site and is now a major tourist attraction…. 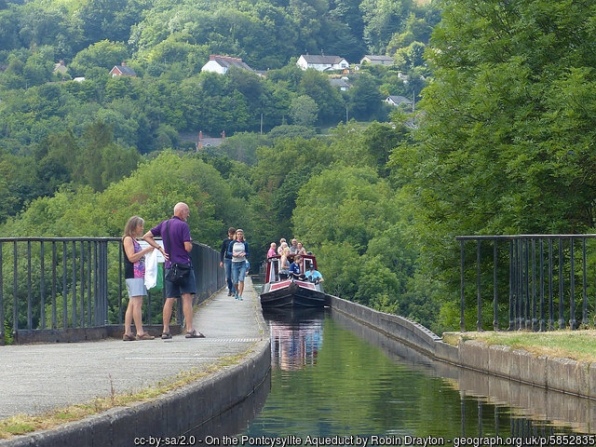 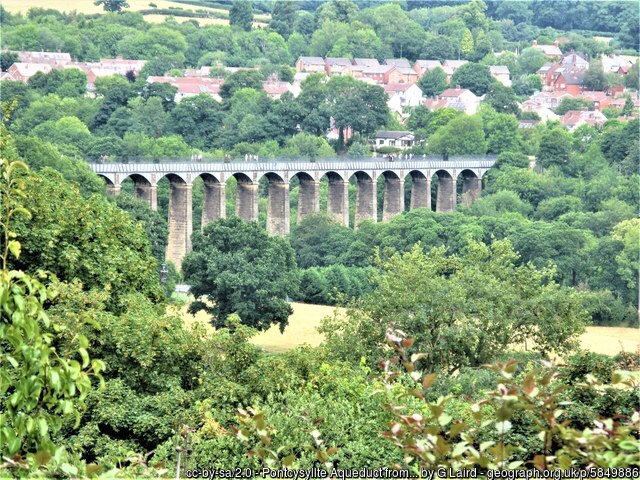 On this day in history : 24th July 1837 – Robert Cocking, a professional watercolour artist with a keen interest in science, is the first person to be killed during a parachute jump….

In 1802 Cocking had seen Andre-Jacques Garnerin perform the first parachute jump on British soil – (the first modern parachute jump in the world was by Jean-Pierre Blanchard in 1785)…. Inspired by what he had seen Cocking wanted to improve on the umbrella-shaped design of Garnerin’s parachute…. Cocking’s ‘improved’ design was based on an inverted cone-shape – and he spent several years developing it….

The idea was to launch his parachute from a hot air balloon and gently descend to the ground…. The venue was set at Vauxhall Gardens, London; a large crowd gathered to watch the event – and at 5pm Cocking began his ascent…. Only things were not to go according to plan….

The balloon shot rapidly upwards and the parachute was released….for a few moments it appeared to recover and hold steady – but suddenly it went into free-fall, turning inside-out and then breaking up…. Cocking plunged 5,000 feet to his death….

Cocking would have been killed instantly; his body was found in a field near to Lee, to the south east of London…. The cause of the accident was a combination of the parachute’s weight and its flimsy construction…. It was particularly weak in regards to the stitching that connected the fabric to the framework….

Following Cocking’s death parachuting became unpopular, being confined mainly to carnival and circus acts…. However, in the late 19th century safety developments, such as the advent of safety harnesses, made it viable once again…. 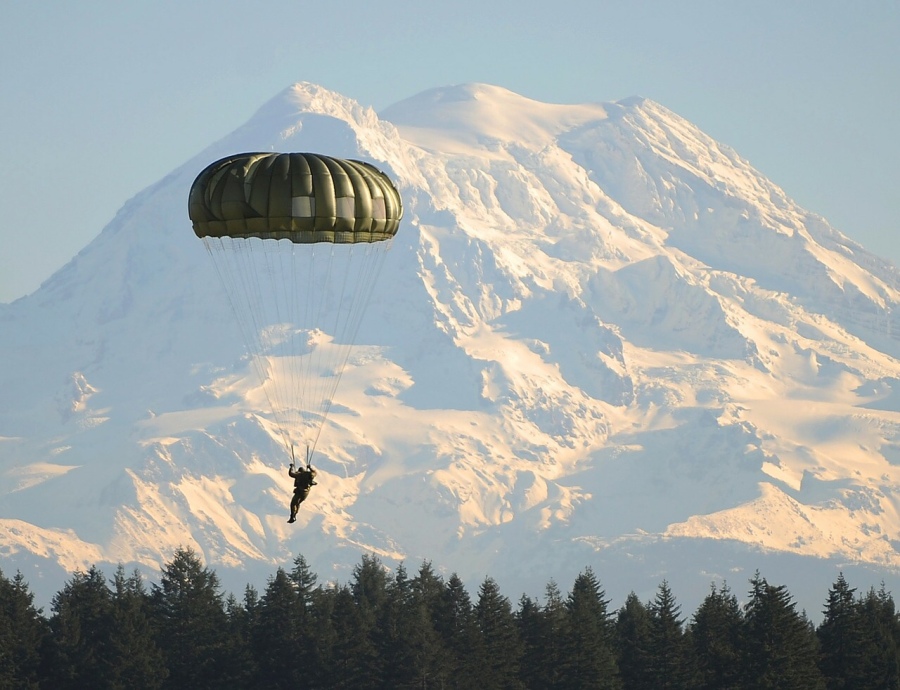