On this day in history : 6th January 1540 – King Henry VIII marries Anne of Cleves….a disastrous union from the start….and one that was to last just a few months….

Henry had always preferred to choose his own wives…. It was shortly after the death of his third wife, Jane Seymour, that the suggestion was made that an alliance with the House of Cleves would be a good proposition. It was at a time when Henry needed new allies in Europe – two of his greatest rivals, the Holy Emperor Charles V and King Francis I of France had forged a treaty…. Henry, having made himself head of the Church of England had expelled Catholicism – and certainly had no friend in the Pope….which gave him common ground with the Duke of Juliers-Cleves, who had also broken all ties with the Catholic Church in his domain…. An alliance would have suited them both….and Henry would have gained political power in Europe…. His chief minister, Thomas Cromwell, was particularly keen on the idea as it would have strengthened the Reformation in England…. All Henry had to do was marry one of the Duke’s daughters – besides he desired another heir….

Crowell praised Anne’s reputed beauty to reassure Henry – but he needed more convincing…. Therefore, Hans Holbein the Younger, a renowned German painter and printmaker was commissioned to paint portraits of Anne and her sister Amalia….Henry required the portraits to be as accurate as possible; the artist was not to ‘flatter’ his subjects – they had to be true to life, as Henry was going to use the likenesses to determine which of the sisters were to become his wife….

Anne of Cleves by Hans Holbein the Younger – public domain 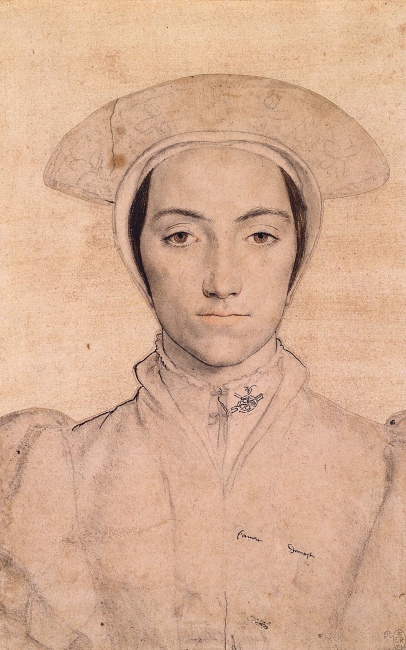 Henry was delighted when he saw the portrait of Anne….and was finally persuaded to agree to a betrothal….and so Anne began her journey to England – to become Queen….

Anne was born on the 22nd of September 1515, in Düsseldorf…. Henry liked his women to be well-educated and to be culturally sophisticated…. Anne was neither of these, she had received little education – she could read and write but only in German – however, she was accomplished in needlework….

Anne was 24-years-old when she arrived on British soil – her husband-to-be twice her age…. On route to London Anne and her escort party rested at Rochester Castle….she was expecting to meet her future husband for the first time at Greenwich, where the wedding ceremony was to take place…. However, in the English court there was a tradition, that was essentially meant to be a bit of fun, before a betrothed couple ‘officially’ met….and King Henry was quite the traditionalist….

Anne had retired to her chamber – when Henry in disguise and accompanied by five of his friends, made a surprise visit to her…. He embraced her, brazenly gave her a kiss and presented her with a New Year’s gift…. Anne, who knew nothing of this custom, must have been a little ‘taken aback’…. She was polite but cool….

Henry was slightly affronted – but as he had been in disguise and they had not even met before – he assumed she had not recognised him and so gave her the benefit of the doubt…. He dined with her that evening and again the following morning – having revealed his true identity…. But the ‘spark’ was not there – there was no chemistry between them – they were so different in culture and didn’t even speak the same language…. Henry later complained Anne looked nothing like her portrait, he did little to hide his disappointment….

Henry tried to get the wedding stopped….he wanted to ‘call the whole thing off’ – but this would have caused a major diplomatic incident….he had to go through with it – and he was furious….

Henry and Anne were married on the 6th of January 1540 at the Palace of Placentia, Greenwich, London – in a ceremony conducted by Archbishop Thomas Crammer….and then, of course, followed the wedding night….

She was young, 24, innocent, unworldly…. He was impatient, twice her age, grossly overweight and increasingly immobile after a jousting injury…. After four nights of trying to do what was required of him – and failing miserably – he attempted to save his pride by blaming her ‘ugliness’ and physical repulsiveness…. He confided to his man-servant that she was “indisposed to excite and provoke any lust” and that he “could never be stirred to know her carnally” and that he “left her as good a maid as I found her”…. More likely he was impotent – perhaps confirmed by the fact he had not taken a mistress for a while….most unlike Henry….

Their marriage was never consummated…. For six months they endured each other’s company….publicly putting on ‘a brave face’ – but by the spring of 1540 Henry had fallen in love with Anne’s lady-in-waiting, Catherine Howard….

On the 24th of June 1540 Anne was ordered to leave court and on the 6th of July was informed of her husband’s intent to have the marriage annulled…. She did not make a fuss….

But there is a twist….one that would perhaps deem Anne the most successful of Henry’s six wives….

It seems that over the six months of their marriage they had actually come to quite like one another….and had come to refer to each other as ‘brother’ and ‘sister’….

On the day the annulment was announced Henry wrote to her…. “You shall find us a perfect friend, content to repute you as our dearest sister. We shall, within five or six days….determine your state minding to endow you with £4,000 of yearly revenue…. Your loving brother and friend…. Henry”….

Anne was given not only a generous annual allowance but property too….namely Richmond Palace and Hever Castle in Kent – she also owned Anne of Cleves House in Lewes, East Sussex….

Henry went on to marry Catherine Howard – but Anne was still very much included in the family – often being invited to court and even spending the Christmas period….

Anne outlived Henry by nearly ten years – and also outlived all of his other five wives…. She was remembered by those who had served her as being generous and easy-going…. She died in 1557, eight weeks before her 42nd birthday, probably from cancer…. She was buried in Westminster Abbey on the 3rd of August 1557….