On this day in history : 29th November 1963 – The Beatles release ‘I Want To Hold Your Hand’ – which goes on to reach No.1 in the charts….knocking another of their own singles from the top position….

By knocking ‘She Loves You’ from the top spot, this gave the Beatles reign of the charts with both the No.1 and No.2 positions…. Very few acts have managed to do this…. The Beatles did it again in December 1967 when ‘Hello, Goodbye’ reached top with ‘Magical Mystery Tour’ at No.2….

In 1978, following the huge success of the film ‘Grease’, two songs from the soundtrack album achieved it…. John Travolta and Olivia Newton-John made No.1 with ‘Summer Nights’ with a solo John Travolta taking the No.2 position with ‘Sandy’….

John Lennon’s ‘Imagine’ shot to No.1 after his death in December 1980 and was joined by ‘Happy Xmas (War is Over)’ at No.2…. Three weeks later ‘Imagine’ still held top position and ‘Woman’ rose to No.2….

Others have followed since…. Frankie Goes to Hollywood with ‘Two Tribes’ and ‘Relax’ and Madonna with ‘Into The Groove’ and her re-released debut single ‘Holiday’…. In January 2016 Justin Bieber went one better by holding the top 3 positions….but a year later this was equalled by Ed Sheehan with ‘Shape of You’, ‘Castle on the Hill’ and ‘Galway Girl’….

On this day in history : 24th November 1991 – Freddie Mercury dies at the age of 45, at his West London home – just one day after announcing publicly that he was HIV positive….

The lead singer of Queen died from bronchial-pneumonia brought on by AIDS….it is thought he had been suffering from the disease for at least two years…. Even as his health declined Freddie continued to make music….

As news of his death broke tributes from around the world began to flood in…. Dr. Patrick Dixon, the director of an AIDS education charity told the BBC that by admitting that he was a sufferer of the disease he was giving his fans the greatest of gifts…. “His hope was no doubt that through his openness many people throughout the world would see that AIDS is a real illness”….

Five months later, on Easter Monday 20th of April 1992, a Freddie Mercury tribute concert for AIDS awareness was held at Wembley Stadium – with an audience of 72,000 people…. It was broadcast in 70 countries and raised approximately £20m for AIDS charities….

The concert opened with a tribute message from the three remaining Queen members :- Roger Taylor, Brian May and John Deacon…. The first half of the concert saw performances from bands who had been influenced by Queen’s music – such as Guns N’ Roses, Metallica, Def Leppard and Extreme…. The second half featured a performance from Queen with guest vocalists:- David Bowie, Elton John, Roger Daltry, George Michael, Robert Plant, Annie Lennox, Paul Young, Seal, Lisa Stansfield, Liza Minnelli and so many more took part – all wanting to pay their own tribute to Freddie Mercury, rock legend….

On this day in history : 14th November 1952 – Britain’s first music chart is published in the New Musical Express; the No.1 position is taken by American crooner Al Martino….

“Here in my heart” by Martino stayed at No.1 for nine consecutive weeks….

The United States had been compiling a weekly chart based on record sales since 1940 – but Britain still measured a song’s popularity by sales of sheet music….

One of the founders of the NME, Percy Dickinson, decided to compile a list of the week’s best-selling singles…. He did so by telephoning twenty different record stores around the country each week – to determine the top 12 singles the British public were buying….

On this day in history : 6th November 1975 – The first public performance by The Sex Pistols – at St. Martin’s College of Art, London….

The gig was organised by the band’s bass guitarist, Glen Matlock, who was studying at the college…. They were supporting the headline act, Bazooka Joe – who loaned the Pistols the use of their equipment…. The Sex Pistols were to play just five songs – including covers of ‘I’m Not Your Stepping Stone’ by the Monkees, The Who’s ‘Substitute’ and ‘Whatcha Gonna Do About It’ by the Small Faces…. They also performed their own song ‘Seventeen’…. After less than twenty minutes the plug was pulled on them…. There is some discrepancy as to who called time to the proceedings but it is thought that Bazooka Joe were less than happy at seeing their equipment being smashed up – the evening ended with a fist fight….

Three of the band’s members :- Steve Jones, guitarist – Paul Cook, Drummer and Glen Matlock, bassist – had formed a band in 1972 and had called themselves ‘The Strand’…. They took their inspiration from groups such as The Who and The Small Faces…. They were managed by Malcolm McLaren – an artist, fashion designer and boutique owner (SEX) – along with his then girlfriend Vivienne Westwood…. McLaren had a vision – a way of creating a whole new sound and look…. John Lyndon (Johnny Rotten) joined the band as vocalist, the existing three had a new frontman and they became The Sex Pistols…. With their raw, unpolished loud music, the band were about to become one of the most influential groups in the history of popular music…. Although they only produced four singles and one studio album in their two and a half year career- they initiated Punk Rock….

On the 8th of October 1976 The Sex Pistols signed with EMI; their debut single ‘Anarchy in the UK’ was released the following month…. On the 1st of December 1976 their foul mouths and attitude on a TV appearance earned them the label ‘Rotten Punks’…. On the 6th of January 1977 EMI dropped them…. Glen Matlock departed the band in February ’77 and Sid Vicious took his place…. In May of the same year the band released their single ‘God Save the Queen’ – surrounded by controversy it was promptly banned by the BBC…. On the 7th of June, during the Queen’s Jubilee celebrations the Pistols attempted to perform on a boat on the Thames – but were stopped by the police….

So, on that rainy November night back in 1975 – when in front of an audience of apparently approximately just twenty….history was made…. As for Bazooka Joe – they never got far…. Although their bass guitarist, a guy named Stuart Goddard, went on to have some degree of success – when he changed his name to Adam Ant….

On this day in history : 4th March 1966 – John Lennon gives an interview in which he states the Beatles are more popular than Jesus Christ – it causes outrage in the United States….

The interview was for the Evening Standard….it was the first in a series of articles entitled “How Does a Beatle Live?” Each member of the group was individually interviewed – starting with John Lennon at his home in Weybridge….

“Christianity will go. It will vanish and shrink. I needn’t argue about that; I’m right and I’ll be proved right. We’re more popular than Jesus now; I don’t know which will go first – rock ‘n’ roll or Christianity. Jesus was all right but his disciples were thick and ordinary. It’s them twisting it that ruins it for me”….

His words provoked no reaction from the public in the UK…. However, in July 1966 it was quoted in a US teen magazine and was received in America in a very different manner….

The publication that had been granted rights to all four interviews was a magazine called ‘Datebook’. Being broad minded – covering topics such as the legalisation of marijuana and inter-racial relationships – it was considered the most suitable for publishing the interviews…. Datebook teased its readers with the snippet “I don’t know which will go first – rock ‘n’ roll or Christianity” printed on the front cover….

Tommy Charles a DJ for WAQY, a radio station in Birmingham, Alabama heard of the comments – and was furious…. “That does it for me. I am not going to play the Beatles any more”…. The listeners were asked for their opinions – and they were less than favourable….the people were beginning to show their contempt….

The ball started to roll….more than twenty other radio stations followed suit and banned Beatles music…. The public were keen to show their anger – in the South especially – demonstrations were held, bonfires lit, Beatles memorabilia and records burned…. Soon the protests crossed over to Mexico and on to other particularly religious countries – such as Spain and South Africa…. The Vatican issued a public denouncement of Lennon’s comments….

Unfortunately the controversy coincided with the upcoming US tour scheduled for August and the recent release of the album ‘Revolver’….

Lennon apologised for his comments, cheekily saying “If I had said television was more popular than Jesus, I might have got away with it”…. The Press were somewhat sympathetic….

However, it was touch and go as to whether the tour would go ahead – but it was decided that it should…. Overshadowed by disturbances and protests – even being picketed by the Ku Klux Klan – some dates were cancelled, such as Memphis – because the Beatles were not welcome in town….

There was some support for the Beatles though…. One Kentucky radio station said it would play Beatles music in order to show its “contempt for hypocrisy personified”…. And a Jesuit magazine – ‘America’ – wrote that “Lennon was simply stating what many a Christian educator would readily admit”…. 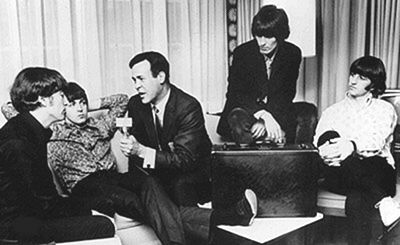