Recently, via my work in the antiques/vintage field I came across a couple of framed prints from the early 1900s, by artist Helen Allingham.

Helen was undoubtedly one of the finest painters of the Victorian era, well-known for her paintings of cottages; Helen had close links to this area of Surrey and many of the cottages that she painted were local to here…. 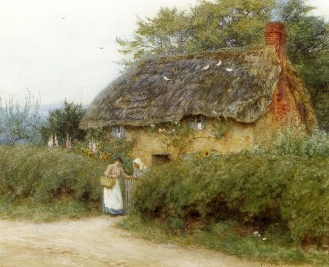 A Cottage With Sunflowers At Peaslake…. 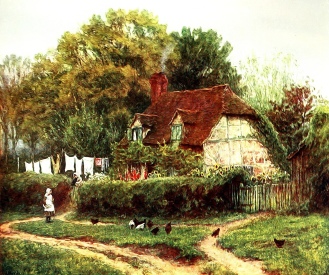 A Cottage Near Godalming Surrey…. Image: Plum leaves via flickr.com

Helen was born Helen Mary Elizabeth Paterson on the 26th September 1848 in the small village of Swadlincote, near to Burton-on-Trent, Derbyshire. She was the eldest of seven children; her father, Alexander Henry Paterson was a doctor and her mother, Mary Chance Herford, the daughter of a wine merchant. Before Helen reached her first birthday the family moved to Altrincham in Cheshire. Tragedy was to hit the family when Helen was just 13 years old; in May 1862, after treating victims of a diphtheria epidemic her father caught the disease himself and died, along with her 3-year-old sister, Isabel….

Helen’s mother took her young family to Birmingham to live – to be near to family who could help provide for them. From a young age it became obvious that Helen had talent as an artist; her maternal grandmother, Sarah Smith Herford and aunt, Laura Herford were both successful artists in their own rights – and so it was only natural that Helen was to be encouraged…. She enrolled in the Birmingham School of Design – and then at the age of 17 achieved a place in the Female School of Art, London…. In 1867 she was accepted into the Royal Academy School, where she became influenced by Masters, such as Sir John Everett Millais – co-founder of the Pre-Raphaelite Movement….

Having a need to support herself, whilst continuing to study, Helen took on work from engraving companies, sketching figures and scenes.

In 1869 she was commissioned by a magazine to produce a series of full-page illustrations; she also did commissions for other publications and for children’s books…. In 1870 she was employed by The Graphic, a high quality magazine – she was the only woman at the time to be taken on by them – her reputation was gaining and she became more and more in demand…. She finished training at the Academy in 1872, to concentrate on her career producing illustrations – such as those for Thomas Hardy’s ‘Far from the Madding Crowd’….

It was around this time that Helen met fellow artist Kate Greenaway, at evening classes and they were to become life-long friends. It was also about this time that she met well-known Anglo-Irish poet and editor of Fraser’s Magazine, William Allingham, 24 years her senior; they were married on 22nd August 1874.

As William was well established, Helen no longer had a need to work; they moved to a house in Trafalgar Square, London and she began to concentrate on painting watercolours, her absolute passion….

In 1874 two of her pieces, ‘The Milkmaid’ and ‘Wait for Me’, were accepted for an exhibition at the Royal Academy. Both paintings sold and further commission works came in….

In 1875 she became the first woman to be granted full membership of the Royal Watercolour Society; this was also the year her first child was born. Helen and William had three children, Gerald Carlyle in November 1875, Eva Margaret (Evey) in February 1877 and Henry William in 1882….

Having spent happy family holidays in the countryside Helen started to paint rural scenes…. It wasn’t long before the Allinghams decided to relocate to the country and moved to Sandhills, a hamlet close to the village of Witley, in Surrey. It was here that she gained her fame for painting cottages….

Children on a Path outside a Thatched Cottage in West Horsley, Surrey…. Circa 1895 Image: Plum leaves via flickr.com

The time at Sandhills was a productive, successful period for both Helen and William. He found inspiration for his ‘William Allingham’s Diary 1847-1889’…. A work that reveals much about Victorian literary life…. William had many great writer friends, such as Alfred Lord Tennyson (a life long friend), George Eliot, Thackeray, the philosopher Carlyle and others….all who feature prominently in his writing…. 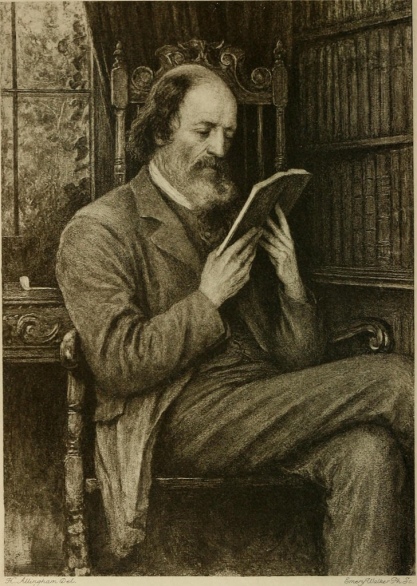 Helen’s own work flourished; her cottages became particularly popular back in London and were much sought after. In 1886 she was invited by the Fine Art Society in London to hold her own exhibition entitled ‘Surrey Cottages’ – she exhibited 62 paintings. The following year another exhibition, this one called ‘In the Country’ saw her display a further 82 paintings….

However, Helen had another reason for painting cottages…. She was an environmentalist – following the same path as the likes of William Morris and John Ruskin…. Old cottages were being destroyed, either literally by demolition or by unsympathetic restoration – as, with the arrival of the railway network, wealthy Londoners were buying up rural properties for weekend retreats – old cottages that had stood for centuries…. Helen’s way of preserving their memory was through her painting, she would endeavour to capture their image before they were destroyed or changed beyond recognition. She paid great attention to detail and portrayed them with intense accuracy…. Occasionally she would add ‘licence’ by reverting modernised features back to the original; maybe reinstating lattice windows or a thatched roof for instance…. In fact, even today, her works are still studied by architects to understand how these old cottages were built….

The Saucer of Milk… Source Bonhams 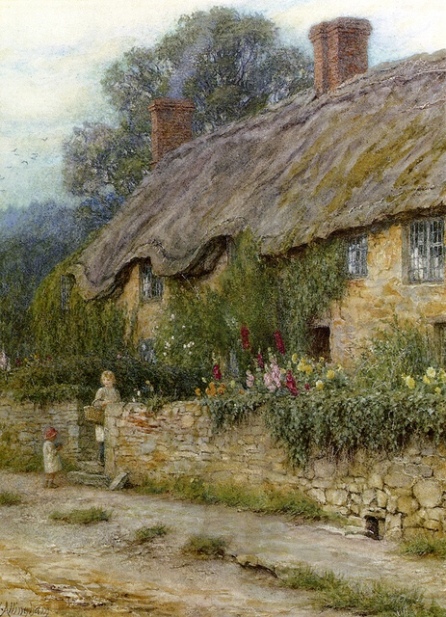 William and Helen lived a happy life during their time at Sandhills. Witley and the surrounding area had a large, thriving community of artists and like-minded people. Helen’s friend Kate Greenaway lived close by….as did others, such as printer and engraver Edmund Evans, illustrator Randolph Caldecott and watercolourist Myles Birket Foster. The Allinghams knew Gertrude Jekyll, who lived in nearby Busbridge and Helen painted in Jekyll’s garden; one such piece ‘The South Border’ is now displayed in Godalming Museum….

In 1888 William’s health began to fail. Wanting  to be near their London circle of friends – and where their children could obtain the best possible education – they decided to return closer to the city and moved to Hampstead. Helen however, continued with her work recording the timber-framed cottages and their inhabitants, by travelling back to Surrey and Kent by train….

William died in 1889, leaving the family with little money. Once again Helen had to depend upon her skills to support herself – and now her children too…. Her cottage paintings continued to sell well, often fetching a good price. In 1890 she became the first woman to be elected into the Royal Society of Watercolours….

Sometimes she would travel further a field to paint – such as Ireland, France and Venice. 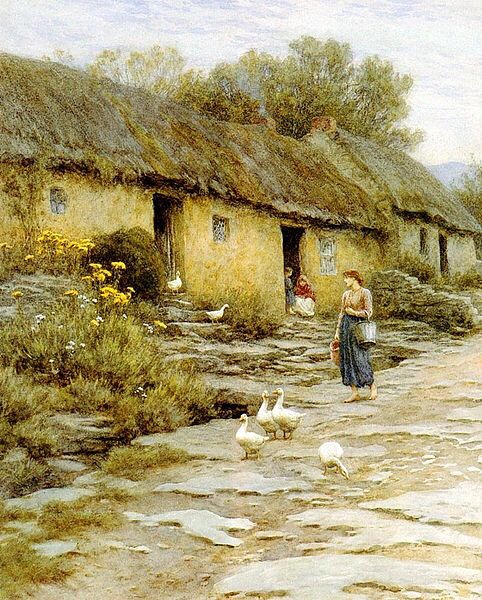 Once a year she would exhibit in London, her cottages ever gaining in popularity…. A collaboration with Marcus B. Huish on a book, ‘Happy England’, published in 1903 about English country life, featured some 80 of her colourplates. A further book in 1905 with her brother, Arthur Paterson, ‘The Homes of Tennyson’ saw another 20 plates and Stewart Dick’s ‘The Cottage Homes of England’ published in 1909 featured 64 more…. Whilst Helen was never particularly wealthy, she and her children lived comfortably….

It was during a visit to a friend in Haslemere that Helen was taken ill; she died on 28th September 1926, two days after her 78th birthday…. An incredibly talented lady – (once remarked upon by Vincent Van Gogh whilst he studied English illustrated journals) – who lived an extraordinary life…. I, for one, am delighted that I came across those prints from 1903….needless to say I have decided to keep them rather than sell them on and I’d love to add to them to make a collection….

As I have gathered together the images for this blog I have been looking closely to see if this old place could possibly be the subject of one of Helen’s paintings…. However, I suspect it would be highly unlikely, as fortunately over the centuries little has really been done to completely change its original appearance…. Who knows, when Helen Allingham was painting her cottages, this one may even still have had its thatched roof…. Sadly it no longer has – but it did have one once – I’d love to have seen it then….

Please…. If you have read this post through to the end – then I assume you have found it of interest and I hope you’ve enjoyed it…. If you have found this via Facebook, a little ‘like’ for the Cottage Capers page would be very much appreciated – a like and follow would be even better…. I’m not trying to sell you anything – I’m simply a blogger trying to establish myself…. Many thanX…. (Below are some more images of Helen’s paintings for you to enjoy)…. 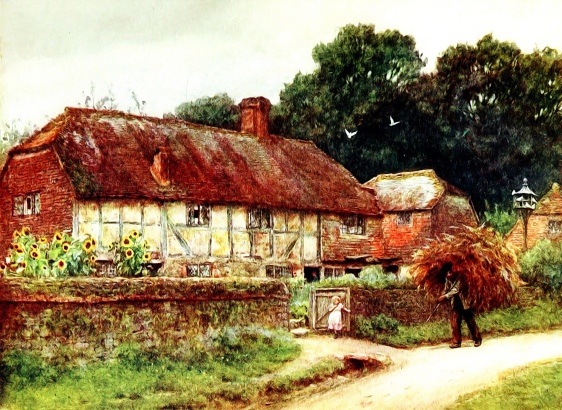 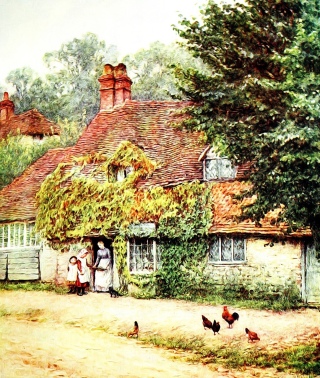 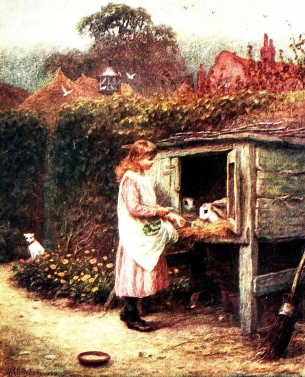 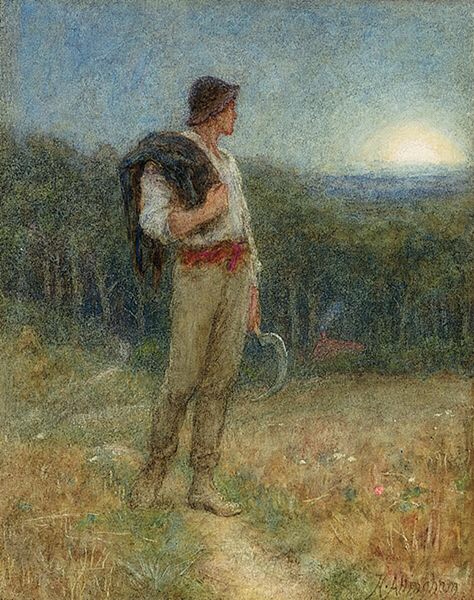 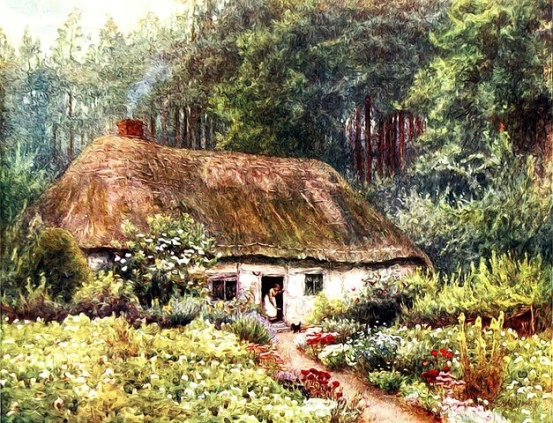 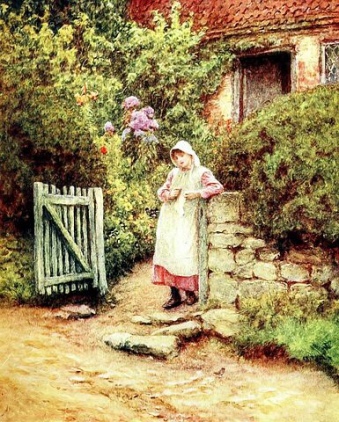 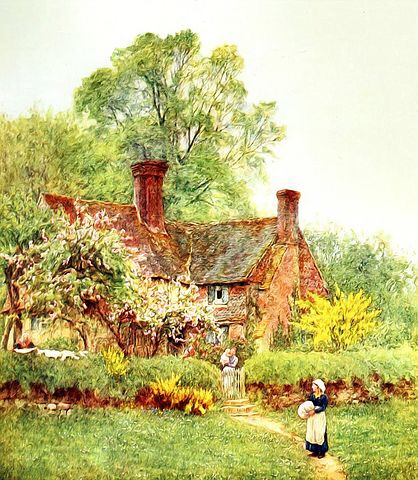 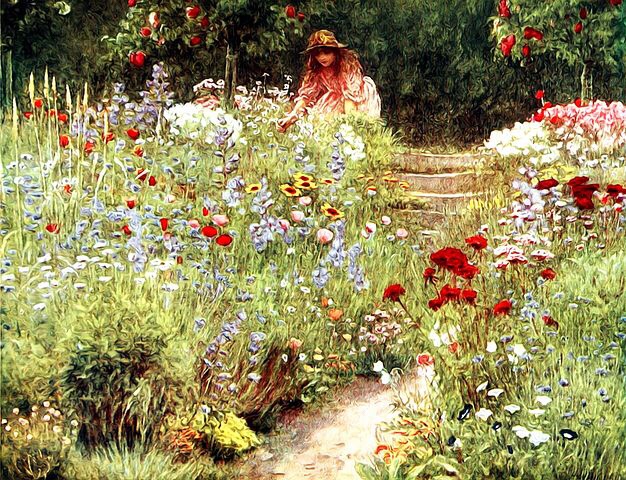