On this day in history : 2nd January 1971 – Disaster strikes at Ibrox Park at the end of an ‘Old Firm’ football match between the two Glaswegian giants – Rangers v Celtic…. Sixty-six spectators are crushed to death and over 200 are injured…. 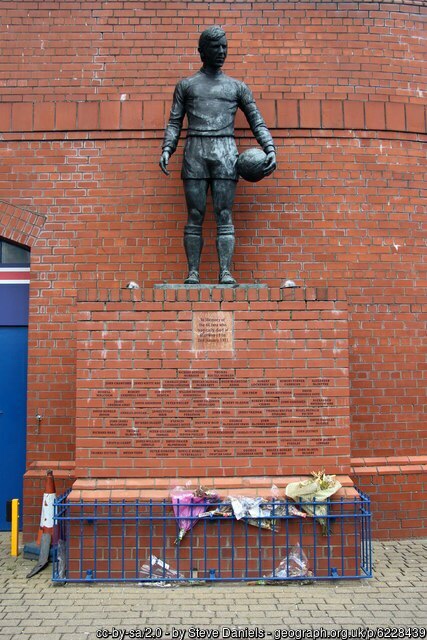 The match had looked as if it were going to be a 0-0 draw….when in the 89th minute Celtic scored – only for Rangers to equalise with only a few seconds of the game remaining…. The 80,000 strong crowd went wild….only tragedy was about to happen on the East terrace, at the Rangers end of the stadium….

As the massive crowd surged to exit the ground some fans stumbled on the steep steps of stairway 13…. Others around them, not realising what was happening, still moved forwards – and a crush developed….the steel barriers on the stairway crumpled and gave way….

Sixty-six people lost their lives – 31 of which were teenagers….five school friends from Fife, 4 of whom lived on the same street, were among them…. One woman, Margaret Ferguson, aged 18 died…. The youngest victim was Nigel Pickup, from Liverpool….he was just 9-years-old…. Over 200 further people were injured….

At the official inquiry, which followed the disaster, it was concluded that someone – possibly a child being carried on his father’s shoulders – fell…..causing a chain reaction….

This was the worse football disaster in British football history until the Hillsborough disaster in 1989…. However, it was not the only catastrophe to have happened at Ibrox Park (now Ibrox Stadium)…. Ten years previously two had died and 44 were injured on the very same stairway…. In 1902 old wooden terraces gave way under the weight of too many spectators….25 died and 587 were injured….

The 1971 incident prompted the UK government to look into safety at sports venues…. As for the Ibrox ground – it underwent a huge redevelopment program taking three years to complete…. Three quarters of the spectating area was replaced by all-seated stands….

In the immediate aftermath of the Ibrox disaster supporters on both sides were united in grief….and now every year those who lost their lives are remembered….

On this day in history : 5th December 1900 – The birth of footballer Jimmy Dimmock, who scored the winning goal for Tottenham Hotspur in the 1921 FA Cup Final and who also won three caps for England….

Jimmy was one of six brothers born in Edmonton, London and played junior football before signing as an amateur player for Tottenham Hotspur in 1916…. His budding football career was halted temporarily by WWI, during which he served as a gunner with the Royal Feild Artillery….

In May 1919 he returned to the sport turning professional with Tottenham – and he was to become a star at a young age…. His first professional match was against Lincoln City and he was to go on to play in some 400 league games for the club, scoring over 100 goals – 12 of which were in FA cup matches…. Jimmy, at 20, was the youngest Tottenham Hotspur player to play in the FA Cup Final – a record for the club still standing today…. In 1921, on a rain sodden pitch, he was to score the winning goal against Wolverhampton Wanderers in the FA Cup Final – despite having sustaining an injury early on in the game…. He made his international debut against Scotland in April 1921 – and won three caps for England in his career….

His career with Tottenham ended in 1931 and he went to play briefly for Thames Association FC – and a couple of seasons for Clapton Orient…. In 1934 he joined Ashford Town to play in the Kent League – but retired from the game in 1936….

After his footballing career had ended Jimmy was to work in the road haulage business…. He had married young and had five children by the age of 33…. After the death of two of his young daughters and then his wife he was deeply affected and never got over his grief…. His health declined, resulting in the loss of both of his legs, confining him to a wheelchair…. Jimmy died in the North Middlesex Hospital, Edmonton, on the 23rd of December 1972….

On this day in history : 14th October 1878 – The World’s first football match to take place under floodlights is played at Bramwall Lane in Sheffield….

Electricity was still in its infancy at the time, Edison hadn’t even patented the electric lightbulb yet…. A football match played in artificial light would have been a huge novelty – so much so 12,000 people paid sixpence each to watch…. In reality the crowd was probably double that size as many sneaked into the grounds under the cover of darkness….

Positioned behind each goal was a ‘portable engine’ powering four lights, which were mounted on plinths situated around the pitch and giving each a height of 30 foot…. The lights put out a power equating to 8,000 candles – the whole experiment was reported as being a resounding success….

The exhibition match between the ‘Blues’ and the ‘Reds’ may have given the crowd unconventional entertainment in comparison to a normal football match – as the brilliance of the lights dazzled the players causing them to make some extraordinary blunders…. The final score : Blues 2 – Reds 0….

On this day in history : 30th July 1966 – Nearly 97,000 spectators, including the Queen and Prince Philip, fill Wembley Stadium to watch England win the World Cup Final….

A further 400 million watched around the world on television – 32.3 million of those were in Britain and it remains the most-ever watched event on British TV…. And it is the only time that England have ever won the World Cup since the start of the tournament in 1930….

West Germany had taken an early lead – but Geoff Hurst had equalised by half time…. Martin Peters scored a second goal 13 minutes from time – but a free kick to Germany just 15 seconds from full time gave a close range shot to the West German team…. Wolfgang Weber took the shot and put a goal into Gordon Banks’ net – taking the score to 2-2 and the game into extra time….

Eleven minutes into extra time saw Hurst score what was to become a controversial goal – one that has been debated ever since…. Alan Ball put in a cross and Hurst swivelled and shot from close range…. The ball struck the underside of the crossbar and bounced down….leaving Swiss referee, Gottfried Dienst, uncertain if it was a goal…. Only after consultation with his linesman, Tofiq Bahramov, was the goal allowed…. Even to this day photographic evidence has been unable to give decisive confirmation….

However, a third goal from Hurst in the final moments of extra time was deciding…. Geoff Hurst was the first man ever to score a hat trick in a World Cup Final….and the final score was 4-2 to England…. Captain Bobby Moore lifted the Jules Rimet Trophy as it was presented to him by Her Majesty the Queen….

On this day in history : 16th March 1872 – The first ever English FA Cup Final takes place between the Wanderers Football Club and the Royal Engineers at the Kennington Oval…..

Before 1871 there had been no regular competitive league games…. Secretary of the Football Association, Charles Alcock, drew up the plans for a league and 15 teams entered the first round in November 1871…. In the beginning it was based very much around the ‘old boys’ public schoolboy network….

Wanderers had formed in 1859 as Forest Football Club….consisting mainly of Harrow schoolboys…. They became known as the Wanderers as they had no fixed ground of their own – but by 1869 they had become based at the Kennington Oval…. Charles Alcock, who had played for Wanderers, was also Secretary of Surrey Cricket Club….

Many football clubs played on cricket grounds at this time…. Often football teams emerged from the cricket teams themselves – as the game was used as a way of keeping fitness up during the winter months…. It wasn’t until the late 1880s and into the 90s that purpose-built football grounds began to appear….

An estimated crowd of 2,000 paid a shilling at the door to watch 22 amateurs play on a cricket pitch, with no nets at the goals, in the first FA Cup Final….

Wanderers had only won one match in the qualifying fixtures….they had drawn with Queen’s Park, a Scottish team, in the semi-finals…. This meant a re-match – but the Scots did not have enough money to return to London and so had to withdraw from the competition…. Under the rules at the time, this meant Wanderers automatically gained a place in the final…. The Royal Engineers – who were founded in 1863 by Major Francis Marindin – secured their place with a 3-0 win over Crystal Palace in a replay….

The match was won by Wanderers, who beat the Royal Engineers 1-0…. The winning goal was scored 15 minutes into the game by Morton Betts, playing under the pseudonym ‘A.H. Chequer’ – as he had attended Harrow and played for Harrow Chequers…. His goal was a simple ‘tap in’ after the ball had been successfully dribbled through the Royal Engineers’ defence….

The FA Cup remains the oldest football competition in the World….