On this day in history : 10th May 1940 – Winston Churchill becomes Prime Minister following the resignation of Neville Chamberlain – after losing a confidence vote in the House of Commons….

In 1938 Chamberlain had signed the Munich Agreement with Adolf Hitler, handing over the Sudetenland region of Czechoslovakia to Germany…. In doing so Chamberlain claimed it would bring “peace in our time”…. However, in September 1939 Germany invaded Poland and in return Chamberlain declared war on Germany….

Under the direction of Chamberlain Britain proved ineffective at stopping Hitler – and when British forces were unable to prevent the German occupation of Norway in April 1940, with the loss of some 4,000 British troops, Chamberlain was to face the withdrawal of support from many members of his own Conservative party…. On the 10th of May Germany invaded France, Belgium, Luxembourg and the Netherlands – and Chamberlain completely lost the confidence of the House of Commons….

Initially Lord Halifax was offered the position of Prime Minister but was to decline…. So, with his track record of military leadership Winston Churchill was appointed Prime Minister…. Labour leader Clement Attlee had made it clear his party would not work with a coalition under Chamberlain – but Churchill was to form a successful coalition and quickly won the hearts and support of the nation…. “I have nothing to offer but blood, toil, tears and sweat” ~ Winston Churchill in his first speech as Prime Minister….

Chamberlain served briefly under Churchill in the War Cabinet as Lord President of the Council, until retiring through ill-health in October 1940…. He died the following month of cancer….

On this day in history : 30th September 1938 – Neville Chamberlain arrives back in the UK with an agreement signed by Hitler…. He claims “I believe it is peace for our time” – he could not have been more misguided….

The Prime Minister had met with the German leader three times in the last two weeks of September…. This last meeting had been at the Munich Conference – which involved talks between Britain, Germany, France and Italy, to decide the future of Sudetenland, part of Western Czechoslovakia…. The Czech government had been hoping Britain and France would come to its aid in the event of a German invasion…. However, it was Chamberlain’s main priority to avert war – British people were terrified of another conflict within Europe…. It was agreed that Germany would annex a large part of Czechoslovakia and Britain and France would not support any resistance put up by Czechoslovakia; in return a non-aggression pact was signed with Germany…. Czechoslovakia was forced to hand over Sudetenland, though it had not even been present at the conference…. 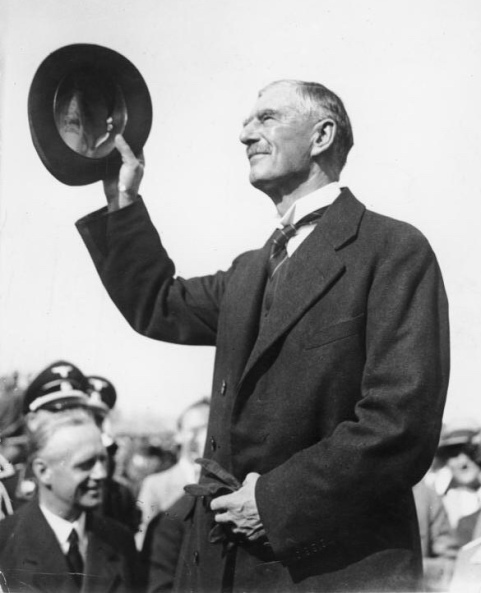 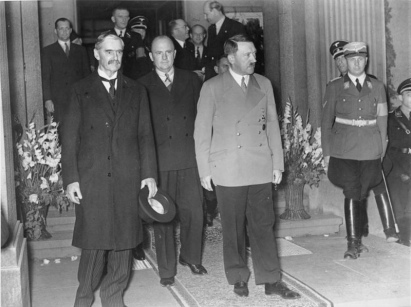 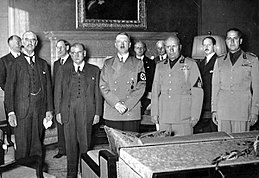 Chamberlain, Daladier, Hitler, Mussolini and Italian Foreign Minister Count Galeazzo Ciano as they prepare to sign the Munich Agreement – CC BY-SA 3.0 de
Chamberlain arrived back at Heston Airport, West London, where a large crowd greeted him, eager to hear him read out the signed agreement…. He then went on to Buckingham Palace, where he appeared on the balcony with the King and Queen – and then went on to hold a further audience outside No.10 Downing Street…. The crowds were jubilant….but there were also many who believed Chamberlain had given in to the demands of Hitler….

Needless to say, Hitler did not adhere to his promise…. A year later he dismissed the agreement as a ‘scrap of paper’ and on the 1st of September 1939 Germany invaded Poland…. World War 2 was declared two days later…. Chamberlain was succeeded by Winston Churchill after being forced to resign in May 1940; he died the following November….