On this day in history : 26th May 1950 – Petrol rationing finally comes to an end in Britain after its introduction at the beginning of World War 2…. Motorists tear their ration books into confetti on the forecourts….

When war broke out in September 1939 petrol was the first commodity to be rationed…. Coupons could be collected from the Post Office on the 15th of September – but couldn’t be used until the 16th, when rationing came into force…. Two coupons were issued, 1 per month and the vehicle’s registration book had to be produced – as the coupons were issued according to the rating stated in the book…. Each coupon represented a unit and was only valid for the stated period – meaning they could not be rolled-over or hoarded – it was a case of use them or lose them….

By 1942 petrol for private use had been withdrawn altogether….it was only available for work that was deemed essential – and a special permit was needed…. Red dye was added to the fuel for those approved users in an effort to combat the black market….

On the 1st of June 1948 petrol was able to be bought again – but it was rationed once more…. By the end of the 1940s it had become a controversial matter as to whether rationing was still needed and featured heavily as a hot topic of debate in the 1950 general election campaign…. The Conservatives argued that it was no longer necessary to ration whereas the Labour Government insisted Britain could not afford supplies from the United States….

Labour lost their majority….and it became all too obvious the public were no longer willing to tolerate rationing…. Minister of Fuel and Power, Philip Noel-Barker, announced to Parliament that a deal had been done with two American oil companies…. The Standard Oil Company, New Jersey and the California Texas Oil Company had agreed to supply oil, accept payment in Sterling and re-invest the money in British goods, such as equipment, oil tankers and services….

When the news broke on the 26th of May 1950 that rationing was to be lifted long queues formed at the garage forecourts – some petrol stations ran dry…. Motorists ripped up their ration books in jubilation whilst they waited….

Petrol rationing was reintroduced again in 1957 for a five month period during the Suez Crisis, when Egypt and Syria blocked supplies from getting through….

There was one bright side to petrol rationing though – cars being a rarity on the roads meant kids got to play safely in the streets…. 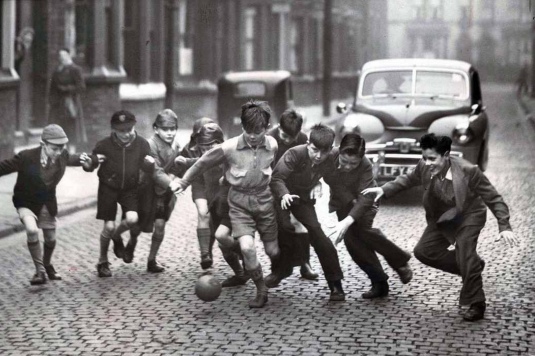 On this day in history : 15th March 1949 – The end of clothing rationing in Britain – after its introduction during World War II….

When clothing rationing was announced by Oliver Littleton, President of the Board of Trade, on the 1st of June 1941, it came as a complete surprise to many people…. The announcement was made just before a bank holiday to allow the retail trade time to adjust….

Roughly 25% of the British population wore a military uniform at the time….putting pressure on the textile and clothing industries…. The allocation of raw materials prioritised for the war effort – wool for uniforms, leather for boots, silk for parachutes – and so on…. Little was left for civilian use….and by reducing manufacture for civilian purposes more space was created in the factories for war related production….

Rationing was also intended to ensure fairness. Each item of clothing would be allocated points in the form of coupons….the amount varied according to the amount of material used and labour required for its manufacture…. For example – a pair of stockings would be 2 points, whereas a dress would have been 11…. A man’s shirt or a pair of trousers needed 8 coupons….women’s shoes needed 5 and a man’s pair required 7….

Children’s clothes had lower coupon values – as they needed to be purchased more frequently – as kids have a tendency to grow…. Often schools did not relax the school uniform rules and this caused problems for many….

At the beginning of rationing everybody was allocated 66 points to last a year….but this number decreased as time went on…. At the lowest point there were just 3 coupons available per month – although from 1942 children were allocated an extra 10 points per year…. New mothers received an extra allowance of 50 coupons….and special provisions were made for some professions – such as manual workers and those who wore civilian uniforms….

One of the problems was that no matter the quality of the garment it carried the same coupon value…. This meant those with larger incomes could buy better quality clothes that lasted longer…. The Women’s Voluntary Service set up clothes exchanges to help those having difficulties in clothing their families…. In 1942 the government introduced the Utility Clothing Scheme…. A range of standardised, good quality, well-designed and price controlled garments was made available…. At first people worried that individual style would be lost, everyone would look the same – but most were pleasantly surprised as a considerable amount of choice was offered….

Women were still expected to look their best….keep standards up by not letting their appearance slip – it was thought to be good for the Country’s morale…. Make-up was still manufactured but in smaller quantities….it was never rationed but became very expensive as a luxury tax was added…. Women improvised, with tricks such as using beetroot juice as lipstick, even boot polish for mascara…. More attention was paid to hairstyles….

Clothing changed….skirts became straighter and shorter to save material…. Even men’s attire changed slightly, gone were the waistcoats and along came the two-piece suit…. Clothing was made with minimal pleating, gathering, pockets and buttons…. Straighter lines, no frills, no fuss….

Then there was the ‘Make-do and Mend’ campaign. Posters and leaflets were issued giving advice on how to make clothes last longer…. How to care for particular fabrics, prevent moth damage, make shoes go that extra mile…. Make-do and Mend classes started up, teaching skills such as dress making…. People became very creative at recycling and renovating existing clothes….and many made their own, spending their coupons on dress fabric – which usually worked out cheaper…. Some used curtain and furnishing fabric – until that too became rationed…. Even blackout material was used, as this did not require coupons…. Parachute silk was the ultimate prize – perfect for underwear, night gowns and of course, wedding dresses….

People were to some extent already used to make-do and mend, it had always been a way of life – so different to today’s consumer driven throwaway society….