On this day in history : 7th May 1860 – The birth of Tom Norman (born Thomas Noakes) – freak showman and the last exhibitor of Joseph Merrick, also known as the ‘Elephant Man’….

Norman was born in Dallington, Sussex – the eldest of 17 children…. At the age of 12 he left school to go and work for his father, a butcher….

A couple of years later he decided to travel and look for work as a performer….but having no success ended up in London, taking a job as a butcher’s assistant….

Norman liked to gamble – and so thought he would try his luck as a professional gambler…. He moved to Berkshire and spent his days at Ascot Racecourse…. However, before long he was back in London, penniless, looking for a job….

He found employment at a butcher’s shop….and it was at this time he developed an interest in freak shows…. Next door to his workplace was a penny gaff – a popular form of entertainment in Victorian society for the lower classes…. Often held in the back rooms of public houses, performances of a theatrical nature with singing, dancing and clowning around would be held…. Sometimes accompanying acts of a more curious nature would be included – as was the case in the establishment next to Norman’s place of employment…. Mlle Electra was billed as ‘The Only Electric Lady – A Lady Born Full of Electricity’…. Whoever in the audience was brave enough to shake hands with the Mademoiselle would receive an electric shock….

Eventually Norman found out the act was a fake; Mlle Electra was plugged into the electricity supply…. Realising how much money could be made from such performances Norman quit his job and went into business with her manager…. It was around this time he changed his name, possibly not wanting to bring disrepute to the family name with his new shady career….

It wasn’t long before Norman realised he would be better off if he went it alone…. He found an ‘Electric Lady’ of his own and set up a penny gaff in Hammersmith – with a good deal of success….

His new business grew and in time he had a series of travelling shows and several shops in Nottingham and London…. The acts varied from giants, dwarves and fat ladies to performing fleas…. As well as the more ‘typical’ acts of a freak show he had his special attractions…. Eliza Jenkins – the ‘Skeleton Woman’ – a ‘Balloon Headed Baby’ and a rather gruesome act where a woman bit the heads off of live rats…. He had a group of retired white seamen who were painted black and spoke a made-up language, calling themselves the ‘Savage Zulus’ and a family of midgets – who were really two men and a borrowed baby….

Norman wasn’t beyond telling the audience a few fibs to bolster his show…. One of his favourites was that the show had been booked by Barnum….the ‘Greatest Show on Earth’…. Unbeknown to him, on one occasion the great P.T. Barnum himself was in the audience…. Luckily Barnum found it all rather amusing and on noticing the silver necklace Norman always wore nicknamed him the ‘Silver King’….

It was in 1884 that Norman encountered Joseph Merrick…. The young man from Leicester had such severe deformities that he was unable to find employment…. For four years he was in the workhouse – before getting himself out and presenting himself to ‘Little George’ Hitchcock, a showman – and who with two music hall proprietors, Sam Tor and J. Ellis, ran a penny gaff…. They exhibited Merrick as ‘The Elephant Man….Half-a-Man and Half-an-Elephant’…. Aware that his novelty would soon wear off they contacted Norman, who with his many travelling shows and shops could offer Merrick more work…. Norman took over Merrick’s management….

On meeting Merrick for the first time Norman was so shocked at his appearance that he was at first hesitant of showing him…. In the end he exhibited him at a penny gaff in Whitechapel – which happened to be opposite the London Hospital – and so was often frequented by doctors and medical students…. One such was a surgeon by the name of Frederick Treves, who took much interest in Merrick and his condition…. Wanting to examine him closer it was arranged for Merrick to visit the hospital…. He went two of three times but after that refused, saying he felt as if he were being treated like some kind of animal….

The Merrick ‘Elephant Man’ exhibition was reasonably successful – but at this time public opinion of freak shows was beginning to change….many finding them distasteful…. As it was, after only a few weeks , the police forced the show to close down…. Treves arranged for Joseph Merrick to live at London Hospital until his death in 1890…. 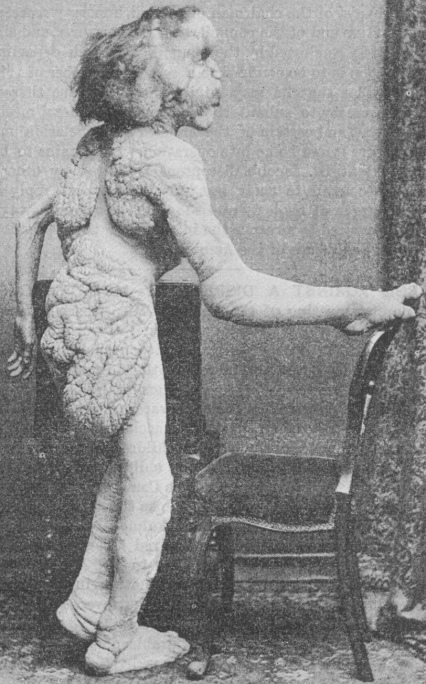 Norman remained in the showman business for ten more years or so…. In 1896 he married theatre performer Amy Radnor and they had ten children…. After moving to Croydon Norman took semi-retirement, selling off part of his business…. On the 24th of August 1930 he died of throat cancer…. Five of his children followed in his footsteps with circus and fairground careers….