On this day in history : 30th November 1934 – The steam locomotive ‘The Flying Scotsman’ becomes the first steam train to officially exceed 100 mph….

The LNER class A3 4472 Flying Scotsman – a Pacific steam locomotive – was built in 1923 for the London and North Eastern Railway (LNER)…. It’s most famous driver, Bill Sparshatt, had begun his career as a locomotive cleaner in 1890….but by 1931 had become the most senior driver at the Kings Cross shed…. Sparshatt had a reputation for speed and outstanding time keeping and between 1931 and 1936 he became the public face of LNER…. Used for promotional work he was often photographed posing with celebrities on the Flying Scotsman – including land speed record holder Sir Malcolm Campbell….

On the 30th of November 1934 Sparshatt was assisting in speed trials between Leeds and Kings Cross – as part of experiments for future high speed train services…. It was during these tests that the Flying Scotsman reached the record breaking speed….

However, it wasn’t the only record this locomotive was to break…. In 1988, during a tour of Australia, the Flying Scotsman breaks the world record for the longest non-stop run by a locomotive – a run of 422 miles…. 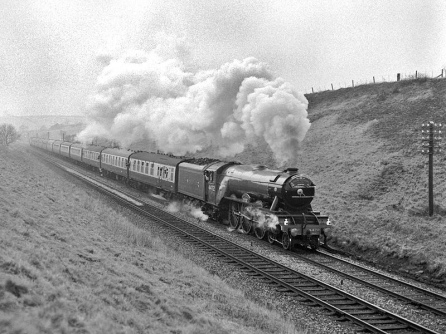