It is a busy time at the moment – sorting through my stock ready for when I move into the antiques centre at the end of this month – At the same time, I can’t resist looking for one or two more unusual bits, to add to the flavour…. I was particularly excited this last week to happen across a Victorian butter churn…. I had to have it…. 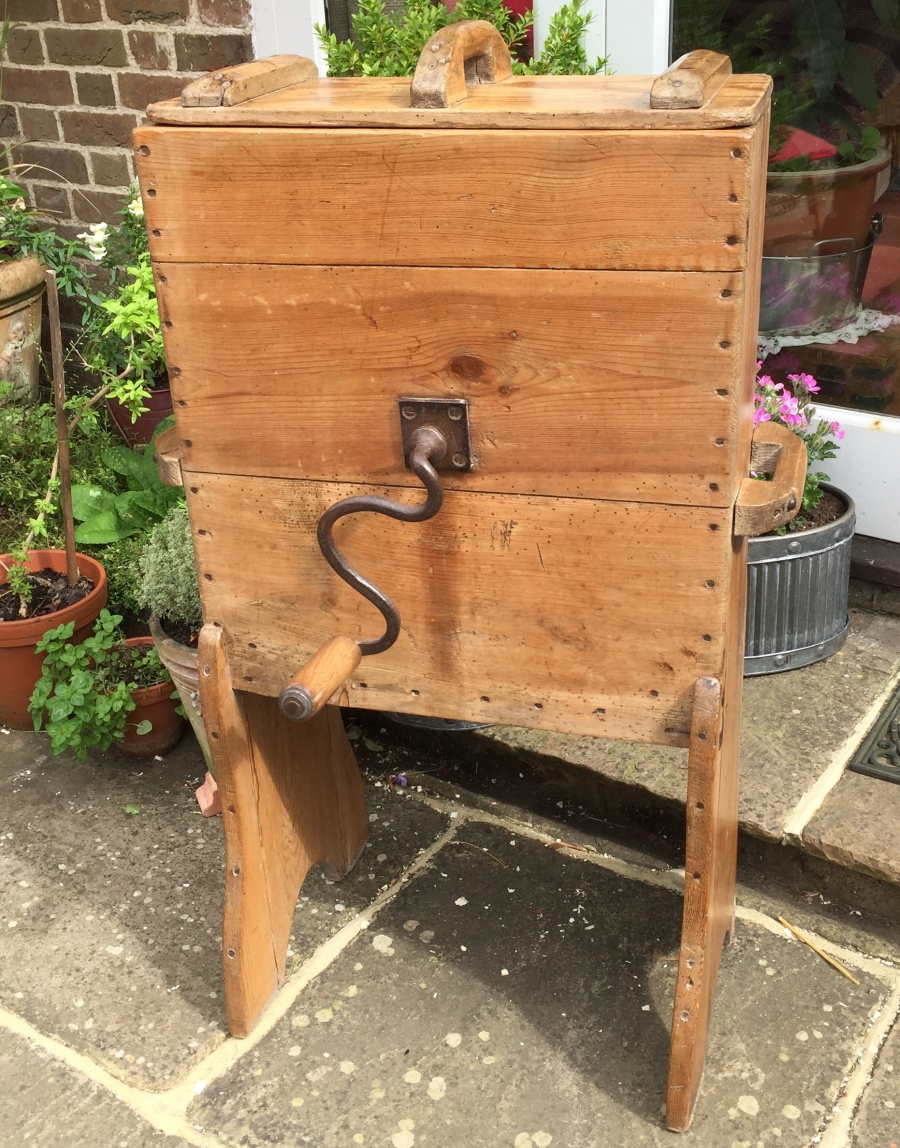 Butter dates back to 2000BC; possibly it may have been discovered accidentally. The first butter was produced by putting milk into bags made of animal skin and then literally shaking until the milk and fat separated…. It is quite likely this process came to light when milk was being transported by animal….

Butter churns have probably been around since the 6th Century…. There are different variations of them but all use the same concept….to agitate the liquid until separation…. The buttermilk is then strained off (and can be used in cooking and baking), leaving behind the creamy butter…. To speed up the process, cream skimmed off the milk could be used; well into the 1800s this was done by simply allowing the milk to sour a little – but by the late Victorian / early Edwardian times cream separators became available….

The more familiar styles of butter churn are: The Plunge Churn – (also known as the Up and Down Churn) – an upright container, with a pole inserted through the top, which is then moved up and down vertically….

The Barrel Churn – a barrel with a handle attached, that either turns paddles within or rotates the whole barrel itself….

Or, The Paddle Churn – a container with paddles inside, that are turned by a handle…. The butter churn I acquired this week is of the latter form; it is French in origin and full of rustic charm…. The paddles inside are made of wood, with cut-outs in the shapes of heart, diamond, club and spade, as in a pack of playing cards…. 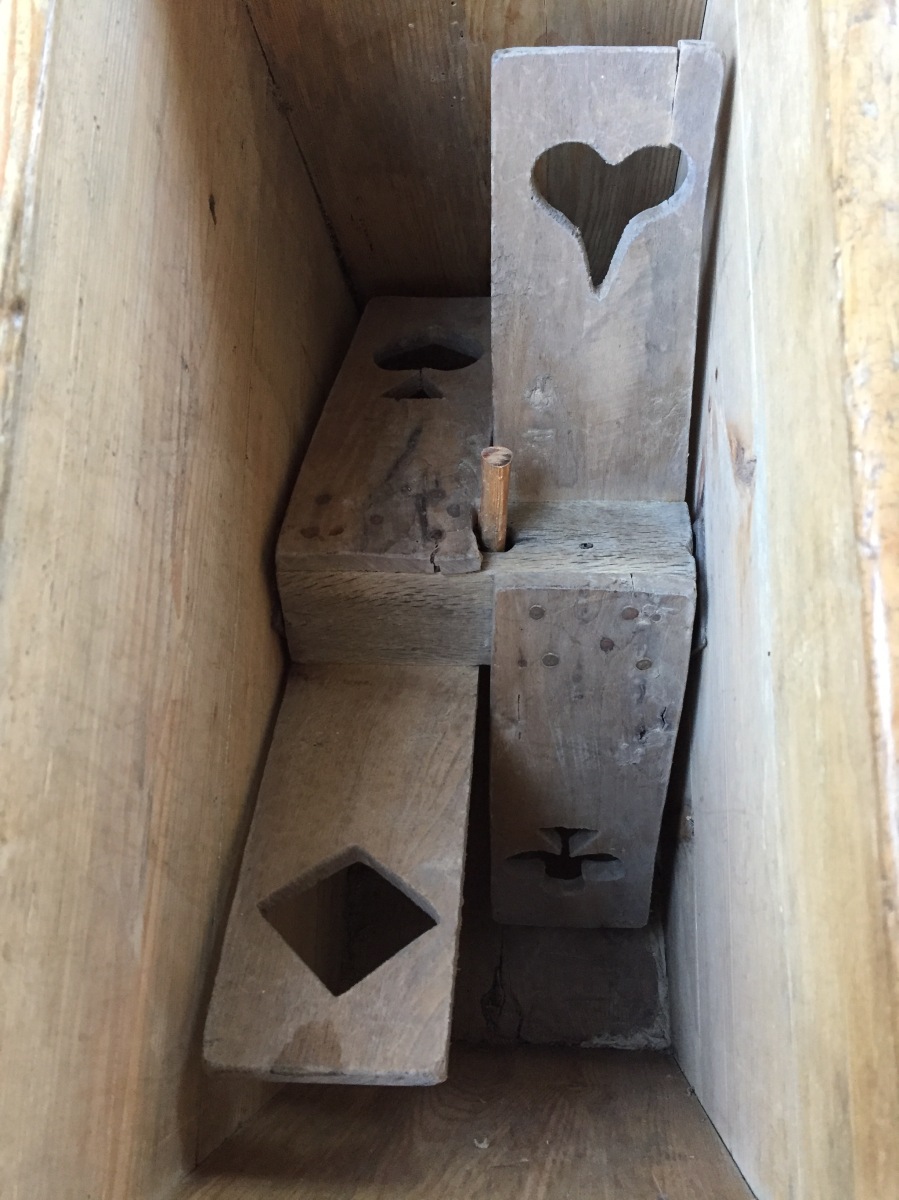 The crank handle on the outside still turns the paddles and so I guess it’s in full working order…. Theoretically, butter could be made – I don’t think I will be giving it a go, though – I’ll stick to buying my butter from the shop….

In years gone by, it would have been very much my job to make sure the family had butter, an essential part of a woman’s daily work…. Even producing the most simple of meals, such as a breakfast of boiled eggs, toast and jam required much effort…. After tending the chickens and collecting the eggs, the bread needed to be made and baked, ready to be slathered with freshly churned butter and home-made jam…. At least in more recent times it became possible to nip down the village shop….

Mankind has been trading his wares for centuries…. The Ancient Greeks had their ‘agoras’ and the Romans their ‘forums’ – market places to you and I…. The Romans were even known to use shopping lists – one was found close to Hadrian’s Wall – dating to 75-125CE (current era, the numbering system for the Julian and Gregorian calendars)…. The Middle Ages saw street hawkers, markets and fairs…. As the 1600s approached, the average Englishman’s purchasing power increased….the demand for sugar, tea, cotton and luxury goods rose….the beginnings of consumerism. Market places expanded…. In 1609 the first shopping ‘centre’ was opened in the Strand, London, by politician, Robert Cecil, the first earl of Salisbury…. This was the start of specific streets and areas being designated to retail….

The first plate-glass windows arrived in the late 18th Century, allowing displays to entice customers in…. A tailor’s shop in Charing Cross was amongst the first to install such windows…. Department stores also arrived in the late 1700s….the first is believed to be Harding, Howell & Co. of Pall Mall, in 1796; it closed 24 years later, after the partnership dissolved. During the 1840s and 50s department stores took off in a big way across the UK, France and USA….

Most villages would have had a village shop…. A centre of the community, where locals would meet and exchange news and gossip….where the proprietor knew most of his customers by name…. Very often, these little shops were a life-line to some of the village’s residents…. 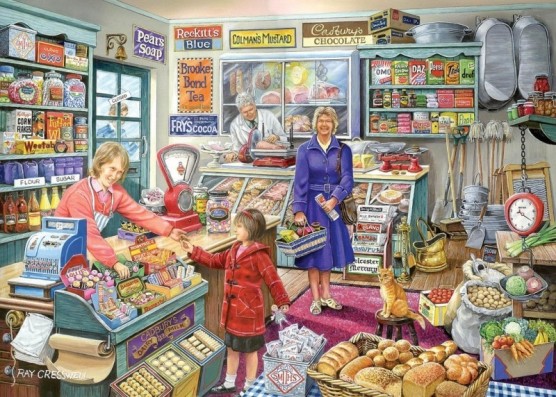 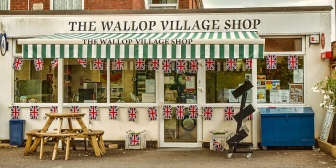 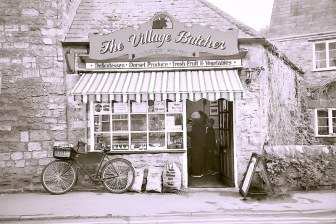 Britain’s oldest surviving shop is the Boxford Stores, in Suffolk. Documented evidence shows it was first used as a warehouse for the buying and selling of wool and fabric. It has been in continuous service as a shop since 1528, when it was rented to Thomas Rastall, a butcher…. Over the centuries it has accommodated a variety of retail businesses, including green grocers, iron mongers and drapers…. Concerns were raised in 2015 that it may close as a shop, when ownership changed hands – but it was bought by two businessmen and it now trades as a green grocers and delicatessen…. 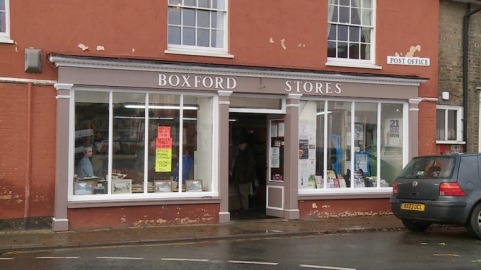 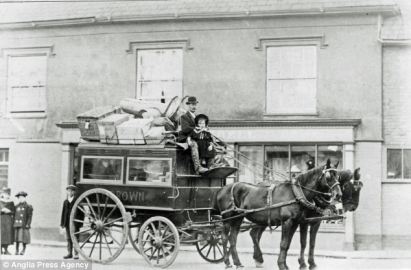 The corner shop is the urban equivalent to the traditional village store….both have been facing a struggle to survive, many have already disappeared. Very often, small shops are family run businesses; because of other opportunities available to them, it is often the case that the children of the family don’t want to take over the running of the business. Of course, the other main reason for their demise is competition from the ‘big boys’…. Smaller premises means the variety of produce available is limited and with their larger purchasing power, supermarkets can very often sell goods at much cheaper prices….

The concept of the self-service grocery store came about in 1916. On the 6th of September of that year, American grocer, Clarence Saunders opened his first ‘Piggly Wiggly’ store at 79, Jefferson Avenue, Memphis, Tennessee…. By 1922 he had 1,200 stores across the States and by 1932 the number had risen to 2,600…. 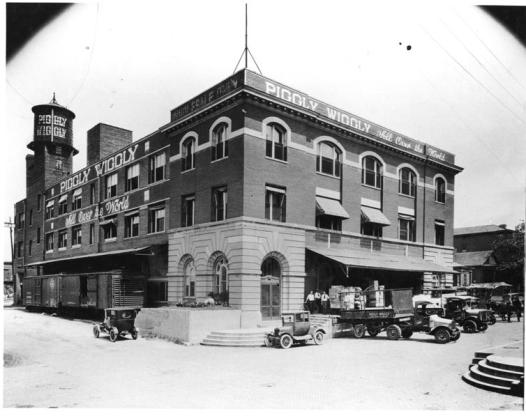 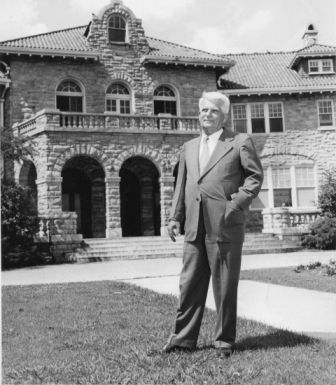 Up until that point, shopping meant a trip to several different stores….the butcher, fish monger, green grocer, baker etc…. It meant queuing at the counter, waiting for purchases to be weighed, measured and packaged….which all took a considerable amount of time….

On that first morning of the brand new Co-op store opening, housewives queued outside in the freezing January cold…. Once inside they were amazed by the variety available to them….and were confused by the concept of serving themselves….

Early stores did not carry fresh produce, such as fruit, vegetables and meat…. How different things are today…. As we all know, just about everything we require on a day-to-day basis can be found under one roof….and of course, bigger stores offer so much more….clothing, electrical goods, toys, even financial services…. There really is no stopping them…. Nowadays, many of the old corner shops are being replaced by the big chains with their smaller convenience stores….

The way we shop has also changed…. Competition between the big concerns and the relaxation of Sunday opening means stores are trading for longer hours, some are even open 24 hours a day…. In recent years we have seen the advent of on-line shopping…. A few clicks and the weekly shop is delivered straight to your door…. ‘Dark stores’ exist; warehouses essentially layed-out like supermarkets but not open to the public – their sole purpose to fulfill all those on-line orders….  Nowadays, the focus is very much on on-line shopping for just about everything…. We don’t have to take time out of our busy lives to trudge around stores and can arrange delivery to a convenient location, be it home, the office…. Actual, physical ‘shopping’ has, to some extent, become reserved as a leisure activity….

We are all often nostalgic when we think about our village shops and corner stores….

Unfortunately, it is our preference for convenience that has seen the demise of so many….we simply haven’t supported them…. Although it may be too late for some, it’s not all doom and gloom….there are plenty that are fighting back…. It is not unusual these days for a village shop to be owned and run by the villagers themselves….often selling local produce – eggs, milk, vegetables from a local farmer, bread delivered daily from a local bakery…. Sometimes these shops will offer a range of artisan or hand-crafted foods…. Many might provide a facility for fresh coffee and place to catch-up with neighbours whilst picking something up for dinner…. The village shop is still, in so many cases, the central hub of the community…. Thankfully, their value has been recognised and conscious efforts are being made to preserve them…. Obviously, we all have to move with the times, many of these little stores are doing just that…. It’s up to us as individuals to help keep them going; personally, I love it when I can pop into a little shop and find something different….may be a jar of locally produced honey – or handicrafts made by somebody within the village…. Let’s face it, we all love a little retail therapy….