There’s an old saying…. “Red shoes and no knickers!” What it is really referring to is someone who’s all for show but has no substance – they are bothered about the ‘flashiness’ of the look – but not the basics – like wearing knickers! We might chuckle at the idea of going ‘commando’ ~ or the slightly less liberated amongst us may raise an eyebrow and think only a loose woman would dare to do such a thing…. But there was a time when it was the complete opposite….until the mid 1800s it was considered improper for a woman to have anything between her legs ~ and that included knickers! (This is why women rode horses side-saddle)….

Roman men and women wore a ‘shorts’ like garment, resembling a loincloth, called a subligaculum. Women also wore a bandage of cloth or leather around the chest, called a strophium or mamilare – perhaps an ancient equivalent to the modern-day bra. It took until 1913 for the modern version to arrive – and was thanks to Mary Phelps Jacob with her pair of hankies tied together with ribbons….

During the 1400s men began to wear ‘braies’, adopted from a type of trouser originally worn by Celtic and Germanic tribes. Made of wool or leather (and later cotton or linen) they generally hung to the knee or mid-calf, resembling today’s shorts…. Women wore shifts and a chemise – any other form of underwear for the nether-regions was thought unnecessary – as warmth was the main priority and the thicker fabrics of skirts and dresses of the time was deemed sufficient….

By 1600 ladies were wearing crinolines or farthingales – a frame of wire or whalebone; an easier, cheaper version was the ‘bum roll’ – a padded roll that was worn around the waist…. Very wealthy women wore silk stockings – (nylon stockings first emerged in 1939 and tights were invented in 1959). Clever ladies may have pinched their husband’s braies to wear underneath their crinolines to combat the droughts….

The first undergarments to become commonplace, emerging in the mid 1800s, were drawers – so named as they were literally drawn on to the body, with lacing at the back to pull in the waist. The legs were then sometimes gathered into a cuff well below the knee. They were basically two separate leg pieces joined at the waist ~ which is how we get the term ‘a pair’ of drawers, knickers or pants…. The seam running from back to front was left open….so those naughty Victorians actually invented crotchless knickers! By the 1850s drawers became more decorative and elaborate, even sometimes being made of silk – and by the end of the 1800s had become part of every day wear – even for poor women (who’s smalls may have been fashioned from scratchy sack cloth)…!

Meanwhile men’s braies had evolved – firstly into breeches, usually stopping just below the knee but in some cases reaching the ankles – and later, by the mid 1800s these were replaced by trousers….

The term ‘knickerbockers’ may have come from the 1809 book by Washington Irving “History of New York” featuring a Diedrick Knickerbocker, supposedly descending from the Dutch settlers of New York. Well-known caricaturist, George Cruikshank, illustrated the Knickerbocker men dressed in loose breeches, tied at the knee…. From the 1820s onwards breeches were often known as knickerbockers – and were especially popular for sporting activities…. It was not unheard of for ladies to borrow a pair of knickerbockers belonging to their husbands to wear under their dresses for a bit of added warmth – perhaps a tip handed down by their crinoline wearing grandmothers…. With the closed crotch seam of knickerbockers a new era arrived in the development of women’s underwear – and is where the name ‘knickers’ comes from…. 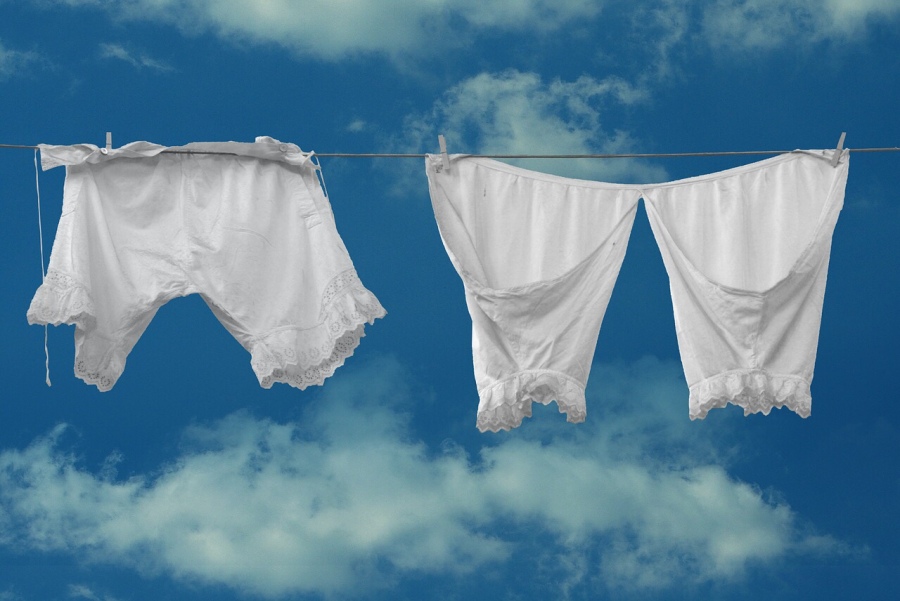 Queen Victoria became an advocate of knickers. Being a fashion icon in her younger days her style was often copied…her hair, her clothes, her love of tartan and her love of drawers – all the fashionable women started to wear them…. From the 1870s various all-in-one combinations started to emerge ~ in the form of camisole bodices being attached to drawers…. By the 1890s Victorian knickers had grown wider at the leg hem, generally with a width of around 20 inches, with a lace frill at the knee – sometimes as much as 10 inches deep. With the wide skirts and petticoats of the period they were easily accommodated….

It was the Great Exhibition of 1851 that first introduced the British public to ‘bloomers’ – so named after the publisher of a ladies’ magazine ‘The Lily’ – American Amelia Jenks Bloomer – who was also a devotee of women’s rights…. Fellow feminist Elizabeth Smith Miller had designed a range of clothing aimed at freeing women from the restrictive garments society expected them to wear – namely the unreasonably tight corsets and cumbersome skirts…. She took her inspiration from the clothes worn by Middle Eastern and Central Asian women. One of the ideas she came up with was a pair of loose-fitting trousers that gathered at the ankle, which were to be worn under a tunic-type dress. Amelia Bloomer decided to promote this style and started to wear it in public ~ and by 1849 these ‘trousers’ had become known as ‘bloomers’….

However, although they were popular amongst the more liberated young women of Britain, they were soon to become undeservedly associated with loose morals and so generally were not accepted in Britain ~ and all because a campaign to promote them went terribly wrong….

After this unfortunate event bloomers became condemned by the more refined women of society – they became associated with the loose and fallen…. Amelia Bloomer’s vision of practical, more relaxed apparel – suitable for sporting and leisure activities (such as her mountain climbing outfit – an open skirt reaching the knee, revealing the rest of the leg encased by a frilly legging) – was not for us Brits…. Good job we don’t have too many mountains here in the UK then….

So, ladies’ knickers continued along the road of evolution to become as we know them today…. Brands started to appear – Triumph (have the bra for the way you are) started making underwear in 1886, Silhouette followed in 1887 and Pretty Polly first appeared in 1919…. Our ‘unmentionables’ became more talked about – words crept into our everyday vocabulary, such as ‘lingerie’ – coming from the French word for linen ‘lin’ – things made from linen…. 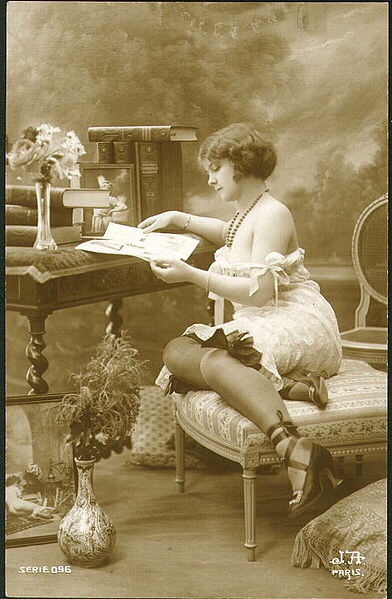 During the 1920s some women were still wearing drawers (those crotchless ones) but most found knickers more comfortable. Wider, shorter ones came into vogue; known as ‘French knickers’ or ‘ skirt knickers’ the style was more suitable for the shorter, closer fitting fashions of the Flapper era…. These replaced the cami-knickers popular in the Edwardian period; by this time much finer fabrics such as lawn were being used….

Nylon was invented in 1935 by Wallace Carothers. The slinkier clothing of the 1930s demanded undergarments to provide a smoother line – it was early days for nylon but it helped enable this…. Skirts had become shorter and the hemline of knickers rose accordingly…. Around 1924 knickers also became known as ‘panties’….adopting the American term….

With the onset of World War 2 – rationing meant drastic means had to be employed….many women had to resort to wearing knitted knickers ~ or if really lucky a best pair made from parachute silk….

By the 1940s and 50s most women had started wearing ‘briefs’ and the majority of which were made of cotton and so could be included in the laundry boil wash…. Silk was kept for special occasions…. During the 1950s nylon and elastic became commonplace – and this really revolutionised underwear – more machine-made merchandise meant our smalls were more readily available….

In the 1960s totally nylon knickers became the norm….and the double gusset arrived. Full briefs reached the waist – but a lower cut became known as ‘hip huggers’ – later they became cut even lower and were christened ‘bikini pants’…. With more figure hugging fashions VPL became an issue that needed to be addressed…. Elongated pants, known as ‘long johns’ or ‘demi johns’ were still being worn but only as practical pants to keep warm in winter….

1974 saw the invention of the ‘thong’ – which was to become really popular in the ’90s…. The 1980s brought us designer knickers with the likes of Calvin Klein and Sloggi….the name emblazoned across the top so it could be viewed peeping above the top of the waistband of a garment – both men and women were guilty of this….

The ’80s also brought us that impractical contraption – the ‘teddy’…. An all-in-one body garment, usually made of silk or satin – but other cheaper options of silky polyesters were readily available ~ with fiddly snap fasteners under the crotch ~ an absolute nightmare if the call of nature needed to be answered urgently…. Teddies offered no support as we’d all supposedly started visiting the gym by then and were well toned and so didn’t need any extra support…. Perhaps it was a garment really designed and better designated to the bedroom – or the bin. Crotchless knickers had also made a come back by then…. The eighties had a lot to answer for….

Nowadays we have plenty of choice….briefs, bikinis, tangas, thongs, g-strings, boy shorts, hip huggers, Brazilians….. We can choose our own comfort…. Wonder what they’ll come up with next…. 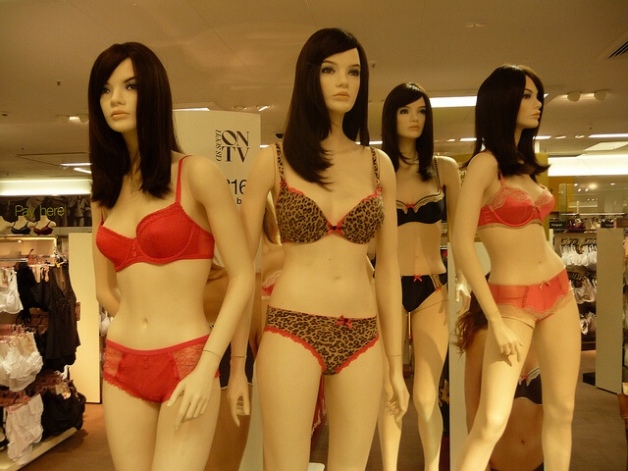 ‘Manikins in Underwear’ Manikins in their underwear in Marks & Spencer in Exeter…. The Local People Photo Archive via flickr 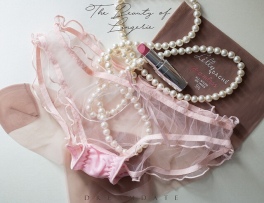 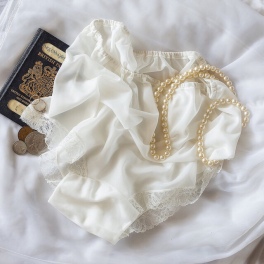 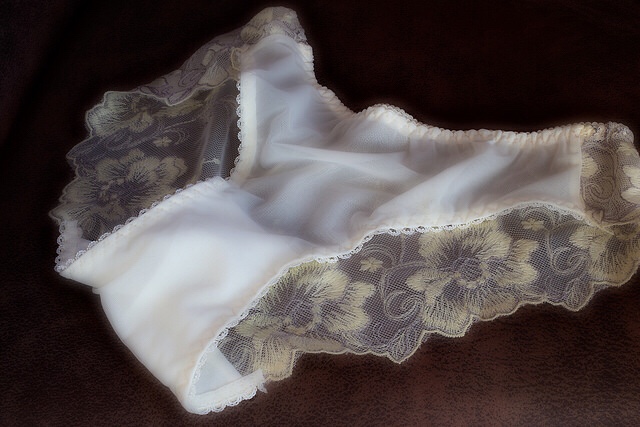 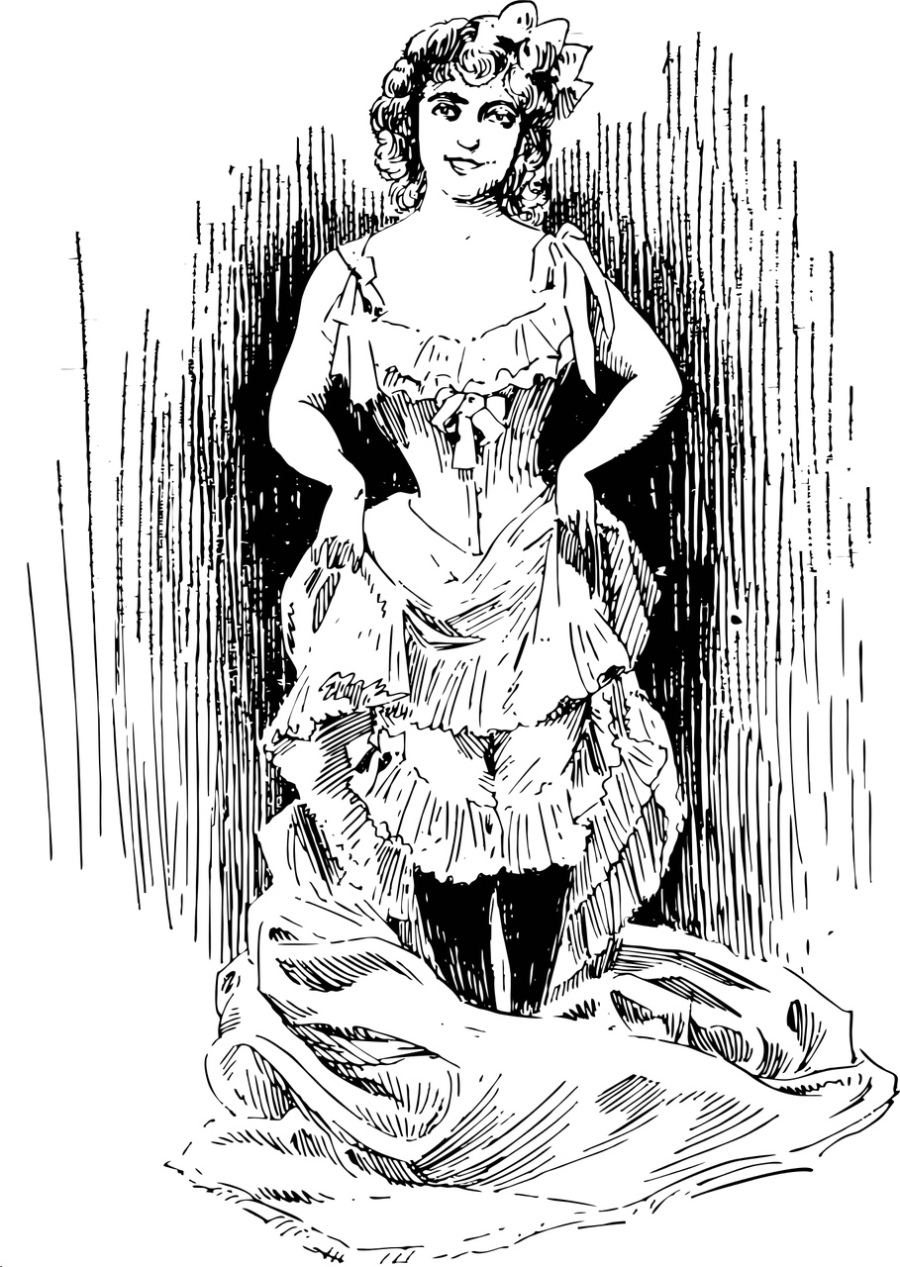 Please…. If you have read this post through to the end – then I assume you have found it of interest and I hope you’ve enjoyed it…. If you have found this via Facebook, a little ‘like’ for the Cottage Capers page would be very much appreciated…. I’m not trying to sell you anything ~ I’m simply a blogger trying to establish myself…. Many thanX….