Striding down the road to knowledge….

To me it seems such a short time ago that we moved into what was then a ‘building site’…. It was the beginning of September 2005; I had always been adamant we were not going to live in a half completed house and that the renovations had to be finished before Jordan started school….but so often these things don’t go according to plan…. That is how we found ourselves frantically moving into a semi-derelict cottage the day before Jordan took his place in the reception class of a local primary school…. A rather chaotic and stressful beginning to his academic life….

How the time has flown – this week Jordan’s school year will be celebrating the end of the exam season and their final year at secondary school, in the way that has become customary in the UK – with their school prom….

I have to admit, the school prom is a completely new experience for me too…. A fairly recent tradition that has taken the best part of a century to cross the Atlantic from the States…. I left school in the early 80s – I can’t remember if we even had a leaver’s disco, let alone a prom! How things have changed…. On Thursday evening Jordan and his school friends will be attending a formal dinner dance at a rather plush wine estate in Dorking…. His new suit, bought for the occasion, is hanging on the back of his bedroom door; he has a new shirt, tie, pocket-chief and shoes, to complete the ensemble…. I perhaps ought to think myself lucky I have a son, I can only imagine the preparations (and expense) for those with daughters….

With over 85% of schools now holding leaver’s proms in the UK, it is a massive business; over £100 million a year is collectively spent countrywide on the occasion – prom dresses/suits (hair, makeup, nails, accessories etc), transport, the venue…. Then there’s year books, leaver’s hoodies…. so it goes on…. Some parents can expect to fork-out up to £1,500! It is now a huge industry and this year is set to be the biggest yet….

It is hard to think, that less than 150 years ago it was not even a legal requirement to attend school at all….

The oldest school in the UK, Kings School, Canterbury, was founded in Saxon times, in 597. During the Middle Ages schools were established to teach Latin grammar to boys from aristocratic families, mainly for those being prepared to enter the Clergy. During Tudor times, under Edward IV’s reign, the system was reformed, to provide ‘free grammar schools’. Theoretically, these were open to anyone – but the majority of poorer families could not spare their children, they were needed for work, their labour bringing in much-needed income to the family….

Up until the late 19th Century the majority of education was organised by the Church, concentrating mainly on religious studies and the teaching of Latin and Greek. The University of Oxford was set up in affiliation with the Church, shortly followed by Cambridge…. For many a child, the only education received was in the form of Sunday school; by 1831 some 1,250,000 children attended Sunday school – this is often seen as the beginning of the British school system as we know it….

Children in wealthier families may have had a governess who would have taught them at home until they were 10 years old. Boys would usually have gone on to public school, whilst girls might have continued education at home. Other children may have attended ‘charity schools’, (informal village schools); or they may have gone to ‘dame schools’. These were run by school mistresses and were basically private schools at the lower end of the scale – they were often very basic, teaching only spelling, occasionally maths and grammar, depending on the mistress’s own abilities…. Many of these lessons were conducted in the school mistress’s own home….sometimes a purpose-built building was available ( a few of these still survive today – a nearby village to here, Thursley, has one within its churchyard)…. Although given the name ‘charity schools’, they were not exactly that, they were not free of charge. In 1870 the Education Act stated schools could charge no more than 9 pence per week per child; it wasn’t until 1891 that free education became available….

It was actually in August 1833 that the State became involved in education, allocating money for schools to be built for poorer children in England and Wales – (Scotland had begun its programme in the 17th Century)…. In 1837 a bill for public education was presented to Parliament…. In 1880 the Elementary Education Act made it compulsory for 5-10 year olds to be educated (with the exception of blind or deaf children). This was not popular amongst many poorer families; tempted to keep their youngsters out earning, they risked a visit from the ‘Attendance Officer’…. Only when a child had reached the required satisfactory level of educational standard were they issued with a School Certificate, enabling them to work. If this certificate could not be produced by any working child under the age of 13, the employer in question could face heavy penalties…. 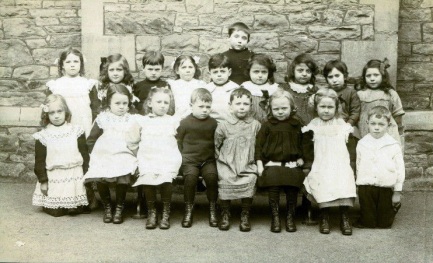 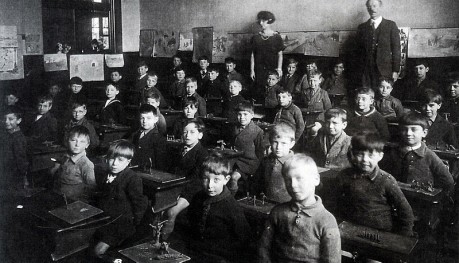 In 1893, the Elementary Education (School Attendance) Act raised the minimum leaving age to 11, this time including blind and deaf children on a voluntary basis, (by now specialist schools were being introduced). An amendment in 1899 raised the age to 12, a further amendment raised it to 13 and made attendance compulsory for blind and deaf children…. During the late Victorian era the grammar school curriculum was brought up to date but Latin was still taught…. 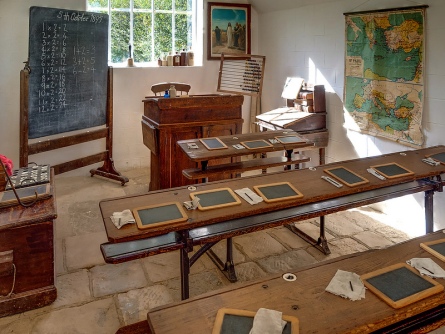 A reconstruction of a Victorian British Schoolroom at the Weald and Downland Museum Angus Kirk via Foter.com / CC BY-NC-ND Original image URL: https://www.flickr.com/photos/anguskirk/8074294232/ 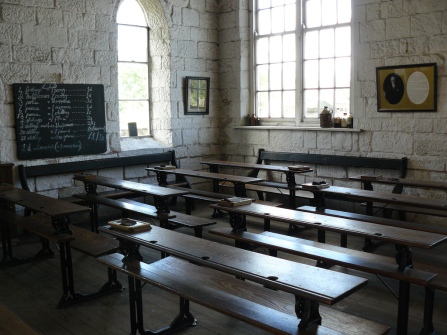 In 1944 the school-leaving age became 15 and on 1st September 1972 it increased to 16…. Of course, things have changed again recently….unless taking up an apprenticeship, it is now a legal requirement to remain in full-time education until the age of 18….

The first exams for schools were introduced in 1858, the schools themselves demanding them as a way of determining achievement levels. Universities, such as Oxford and Cambridge were asked to produce them so boys could sit exams in their home towns (they may have been sat at the school or somewhere like a church or village hall)…. Girls were not permitted to sit exams until 1867….

The first exams took place on the 14th December 1858. There were 2 levels; Junior (for the under 16s) and Senior (for 16s to 18s). Subjects included: English Language and Literature, History, Geography, Geology, Greek, Latin, German, French, Political Economy, Mathematics, Arithmetic, Music, Physical Sciences, Chemistry, Zoology and Religious Knowledge (although parents had the right to withdraw their child from this particular one)….

Examiners would arrive wearing full academic dress, carrying a locked box containing the exam papers. Nowadays, the papers are sent in advance, schools appoint their own invigilators and the papers are returned for marking. Even that is changing though; with the advent of ‘e-testing’, exam papers could well become a thing of the past….

In 1944 the 11 plus exam was introduced, determining whether a child should attend a grammar, technical or secondary modern school for their senior education. It wasn’t until 1964 that comprehensive schools (a school for mixed abilities serving a specific catchment area) were proposed by Harold Wilson’s Labour government….

A General Certificate of Education (GCE), O-levels and A-levels were introduced in 1951 (replacing the School Certificate) – but these were mainly for those attending grammar schools. Some education authorities brought in their own exams for those not eligible to take GCEs and in 1965 the CSE was introduced as an alternative. O-levels and CSEs were then replaced by the GCSE in 1988. In 1995 a further set of tests, often referred to as SATs, were introduced for children aged 7, 11 and 14….

Back in those early days, exams took place over the period of a week….papers were sat morning, afternoon and evening. Nowadays, the exam season extends over 2 months in early Summer. Expectations of students were also very different in the beginning, vast amounts of information had to be learnt off by heart…. A more flexible approach now means students are allowed to demonstrate they can analyse information and show they can apply knowledge and understanding….

Modern day thinking takes the view that children should be encouraged to ask questions in order to learn. In days gone by this was not the case; the belief was that children had to be taught to behave in a correct manner; “children should be seen and not heard” – “spare the rod and spoil the child”. This ‘reasoning’ stemmed from religious views, the Christian belief that mankind was born with a tendency to sin and do wrong. Discipline in Victorian schools probably had to be tough due to large class sizes. Any form of physical punishment today is viewed as abuse; Victorians certainly had no such view – slipper, belt, cane – sometimes it really must have been a severe case of abuse, cruel adults unable to show restraint….both in school and at home…. Poland was the first country to abolish corporal punishment in schools, in 1783. It took English state schools until the late 1980s to follow suit (2000 for Scotland, 2003 for Northern Ireland) and in Britain’s private/public schools right up to 1999. Nowadays corporal punishment is not practised in any European country (although some parts of the World still use it)….

There are those who would argue the cane should be brought back, a little discipline should be instilled. I don’t know, perhaps it is just good fortune – but having just had a child go through the state education system, up to the point of starting college, it has been nothing but an exceptionally positive experience. I have always admired the level of respect both teachers and pupils have shown to each other and there has been a genuine desire from the students to learn and do well…. The kids have worked so damned hard towards these exams; now they are over and prom night is upon us. I hope every single one of them has a fantastic time….they deserve it….X

3 thoughts on “Striding down the road to knowledge….”