On this day in history : 23rd October 1843 – Nelson’s Column in Trafalgar Square, erected to commemorate Admiral Horatio Nelson’s victory at Trafalgar in 1805 is finally completed…. 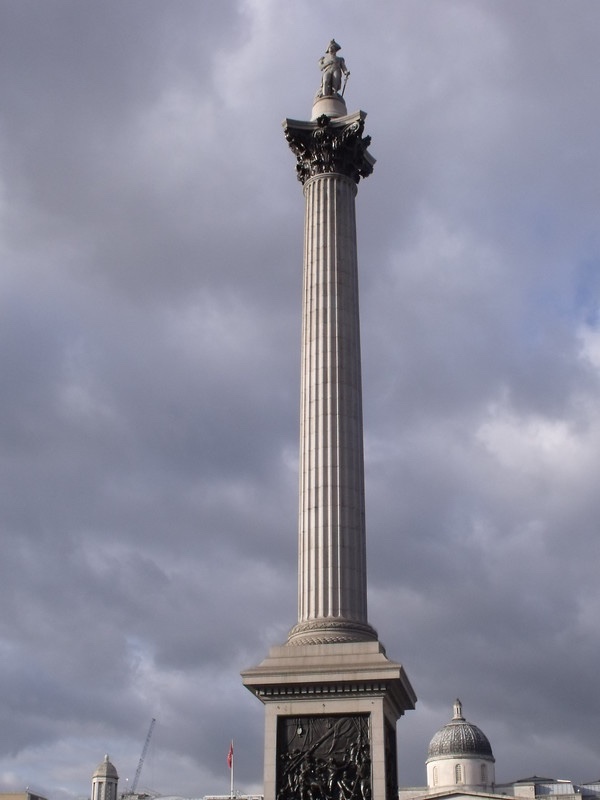 In February 1838 a group of 121 Peers, MPs and dignitaries formed a committee to organise a monument to Lord Nelson…. It was funded mainly from private donations, including very generous help from the Tsar of Russia – and the British Government agreed to provide a site in Trafalgar Square, in front of the National Gallery….

A competition was held for the design – with a budget guide of between £20K-£30K…. (The end cost was actually £47K, over £3 million in today’s terms)…. The winning design came from William Railton; however, after criticism of how the completion was organised, it had to be run again…. After making slight revisions to his original design, Railton still won….the wining entry was chosen by a sub-committee, led by the Duke of Wellington….

Excavation work on the site began in July 1840 and on the 30th of September 1840 the first stone was laid – by Charles Davison Scott, honourably Secretary of the committee and also the son of John Scott, who had been Nelson’s secretary….

Built from Dartmoor granite, with a Craigleith sandstone statue of Nelson, designed by E.H.Baily, the monument has four bronze lions at the base – which were added in 1867…. The lions were designed by Sir Edwin Landseer and have come into some ridicule over the years…. Landseer had been given a dead lion by London Zoo, as a model to work from….but unfortunately it rotted and he had to resort to artistic licence….

The pedestal is decorated by four bronze relief panels, one on each side….and were cast from captured French guns…. They depict the Battle of Cape St. Vincent, Battle of the Nile, Battle of Copenhagen and the death of Nelson at Trafalgar…. The statue of Nelson himself faces down Whitehall towards the South – to HMS Victory at Portsmouth – and further beyond towards Southern Spain and Cape Trafalgar…. Fourteen stone masons were responsible for hoisting the statue up to the top of the column – and they held a dinner party up there on the plinth before doing so….

During World War 2 the German Luftwaffe were ordered not to bomb Nelson’s Column – as the intention was to move it to Berlin after they had ‘won the war’….

On this day in history : 19th October 1991 – Performances at London’s Royal Opera House are cancelled due to a pay dispute with orchestra members….

The 118 members of the orchestra argued that they were the only performers at Covent Garden who were expected to supply their own clothing and instruments…. They sought a 24% pay increase….

At the time the state-subsidised Royal Opera House was having acute financial difficulties…. On becoming Chairman in 1991 Sir Angus Stirling had inherited a £2.5 million accumulated deficit – because of this the ROH could only offer a 5.5% increase….

The orchestra retaliated by refusing to wear the required evening dress and dinner jackets for performances and turned up wearing jeans and casual clothing…. To take their protest even further they announced plans to observe all intermissions called for in the original score of any ballet or opera….thus ignoring the artistic discretion of the conductor and director…. For example: an upcoming production which was to start that coming week would have a total of ‘four’ intermissions instead of the proposed ‘one’ – and one of those breaks was to occur after an act of just eight minutes long….

As a result it was decided all performances would be cancelled until the orchestra ended its protest and the matter be resolved….

On this day in history : 16th October 1834 – The Medieval buildings of the Palace of Westminster are largely destroyed by fire….

The original construction dated back to the early 11th Century and had been built as a royal palace ~ additions were made over time and it had become the home of the British Parliament….

Up until 1826, as part of the accounting system of the Exchequer, small wooden tally sticks had been used ~ these carved, notched pieces were usually made from willow…. Now obsolete the tally sticks needed disposing of; two Irish labourers, Joshua Cross and Patrick Furlong, were given the task….

Work commenced at dawn ~ the pair began to burn the piles of sticks in two furnaces situated beneath the House of Lords…. Although the two claimed they had taken care, a witness said he had seen them piling the wood in…. Heat from the furnaces melted the copper lining of the flues, which in turn started a chimney fire…. With the furnace doors open oxygen was drawn in, making the fire burn more fiercely….

Just after 4pm Cross and Furlong had finished the job; they threw on the last sticks, closed the furnace doors and retired to the pub…. About an hour later sparks from the chimney fire set surrounding woodwork alight…. The first flames were spotted at around 6pm ~ panicked staff tried to put the fire out but failed to alert others in the buildings or call for help…. At 6.30pm a huge fire ball swept through the buildings and the whole interior became an inferno…. The burning roof lit up the sky and could even be seen by the Royal Family 20 miles away at Windsor Castle….

Two hand-pump fire engines arrived but were of little use; at 6.45pm 100 soldiers from the Grenadier Guards joined them…. Shortly after 12 more engines arrived at the scene accompanied by 64 firemen…. Hoses were run down to the River Thames ~ but the tide was low ~ it was too late to save the Palace…. Miraculously, despite the ferocity of the fire, there were no deaths ~ although 9 people needed hospital treatment….

King William IV offered Buckingham Palace as a replacement building for Parliament ~ but MPs declined ~ saying it was too ‘dingy’!!! So the roof was replaced on the Lesser Hall, the Chamber painted and the buildings restored ready for the State Opening in February 1835….

A competition was opened in to which 97 competitors entered to design a new building ~ which was to incorporate the surviving Westminster Hall, the Undercroft Chapel and the cloisters of St. Stephen’s…. The winning design was by architect Charles Barry ~ with his new Gothic-Revival palace…. In 1840 the first stone was laid by Barry’s wife….in 1847 the Lord’s Chamber was completed; Big Ben was installed in the Clock Tower in 1839….and in 1870 the rebuilding of the Palace of Westminster was completed….

On this day in history : 15th September 1960 – Traffic wardens take to the streets of London for the very first time….

Forty wardens, dressed in their official looking uniforms and with the power to issue fines of £2 to illegally parked motorists, set off to hunt for those flouting the law….

The very first ticket was issued to a Dr. Thomas Creighton, who happened to be attending an emergency call at a West End hotel for a heart attack victim…. Public outcry meant the doctor was spared the fine – but on this first day over-zealous wardens gave tickets to ambulances, hearses and apparently even rabbit hutches!

Nowadays, in the Borough of Westminster, where those very first forty wardens pounded the streets, two hundred attendants now patrol….

On this day in history : 12th September 1878 – Cleopatra’s Needle is erected in the City of Westminster, London…. It had originally been presented to the UK by the ruler of Egypt and Sudan in 1819….

The red granite obelisk, which is over 2,000 years old, had been given to Britain to commemorate the victories of Lord Nelson (Battle of the Nile, 1798) and Sir Ralph Abercrombie (Battle of Alexandra, 1801) – but it had taken until 1877 to arrange for its transportation to Britain…. Standing at 69 feet high and weighing 224 tons this was no easy task; a special floating ‘pontoon’ had to be designed so it could be towed to London….

Cleopatra’s Needle is one of three similarly named obelisks; its counterparts can be found in Paris and New York…. London’s Needle is flanked by two bronze reproduction sphinxes, designed by English architect George John Villiamy…. Concealed in the pedestal, on which the obelisk stands, is a time capsule….contained within are items such as:- a portrait of Queen Victoria, a map of London, copies of newspapers, a set of British coins, a box of cigars, children’s toys, a box of hairpins and a dozen photographs of the most attractive women of the day…. 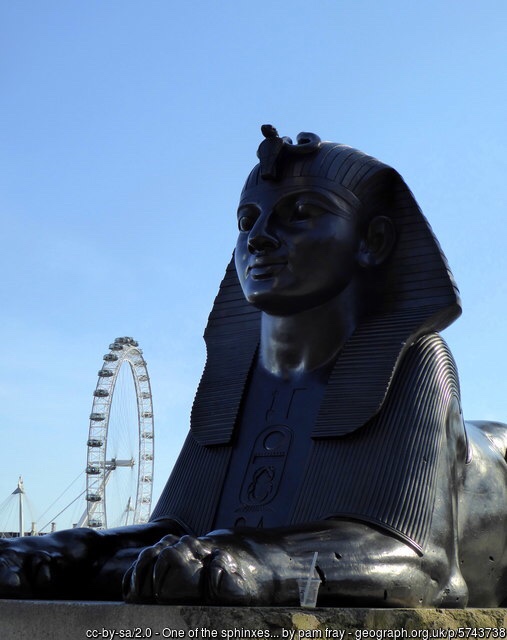